Join the Get into Golf revolution #WhyIGolf

Participation in golf in Ireland is on the rise and according to the latest Irish Sports Monitor (ISM), 43% of the Irish population (approximately 1.6 million people) participate in sport at least once a week. More specifically, the number of women actively participating in golf has increased from 0.9% to 1.2%.

It was also highlighted this year that, since 2014, 4,600 golfers have joined as introductory members of golf clubs via the CGI Get into Golf Programmes, 3,000 of which have been women and girls. Additionally, over 45,000 have sampled golf through CGI community and school awareness days.

Participation Manager Anne McCormack, outlines where the Women’s Get into Golf programme all began and how clubs can get involved next year:

Background
This year in CGI we have supported over 100 Golf Clubs in recruiting new members and retaining existing ones through our Get into Golf and Stay in Golf initiatives. These programmes not only help Golf Clubs increase their membership figures and revenue but also help to make golf more accessible to a wider audience.

Each year our women’s programme continues to be the most sought after from clubs applying for support with over 250 Golf Clubs already delivering the programme and an additional 49 being involved for 2016. The average sign up rate is 38 participants per club – WOW.

Secret to success?
People often ask what the secret to success is, how do clubs get so many people to sign up?
Personally, I don’t believe there are any secrets, there is no magic wand. Success comes hand-in-hand with hard work, determination, belief and team work.

When I began working on this programme, I was a 24-year-old graduate. Full of enthusiasm and research, I was tasked by the Irish Ladies Golf Union (ILGU) to get more women into golf. At the beginning, I didn’t think it could be that hard, I loved the game, I had the research done and an idea drafted up on my computer. What I quickly realised was that everything could not be done from behind a computer screen or from reading books. Unless I could fully connect with adults looking to take up the game for the first time, this programme would flop. Very simply, we set out to design an initiative that matched the needs of our target audience and which could be sustainably rolled out by Golf Clubs. So far it is working but it didn’t look that way straight from the start!

I had learned most things as a child, including golf, and therefore it was challenging for me to understand the barriers in place for adults taking up something new. The initial roadblock came on the day of the first pilot taster session at a club, I was delighted with the response we had received building up to the day but as the start time neared by, enthusiasm began dropping by the minute. Only a handful of people turned up, what had gone wrong?

I started to phone the people who had registered but hadn’t shown and what I soon realised was that most them were sitting in their cars, in the golf club car park, too intimidated to come in. They were not sure where to meet, if what they were wearing was appropriate, if it was ok to come without clubs. These were all things I hadn’t even considered an issue.

I made a panicked call to Sinead Heraty (Chief Executive of the ILGU) – the day had not gone according to the plan, some of the ladies were so nervous they had driven away. The numbers had dropped before we had even started. I thought the whole idea was doomed. But there was no panicked reply from Sinead, just simple words of: “All problems, come fully equipped with solutions”. These became words I remind myself of when we are faced with challenges right up to this day.

Focus Groups
With that experience under my belt and Sinead’s advice, I realised I needed to spend more time talking to people who didn’t already play golf and identify what their perceptions of the game were.

In most cases, they didn’t share the same love or enthusiasm of the game as I did, with reoccurring themes of: “Golf is too time consuming”, “I wouldn’t know where to go, who to talk to or anyone in the club”, “There are too many cliques”, “It is sooooo boring”, “Sure, I wouldn’t fit into the golf club environment at all”.

Once these themes were well thrashed out, we discussed what they would look for when taking up something new. Most of their answers aligned with a fantastic piece of research that our Participation Officer, Rory Leonard, later found at a Sport NI seminar. The research outlined six core values that women typically prioritise:

These values represented areas that are important to women in modern life and how they want to spend their time and energy. Naturally women will prioritise different values at different stages of their lives but these values have now become building blocks for the Women’s Get into Golf programme in subtle ways.

Every experience is one to learn from…
The research and focus groups allowed us to create a variety of pilot programmes. Did more of them flop like the first taster session? Absolutely, and I am not ashamed to say it (now!). Looking back, those failures turned into the greatest lessons and helped to build the foundation of our current offering.

Success, as we tell golf clubs, is never down to the work of just one person, our Participation Officers who have 10+ years’ experience in development were key in shaping the programme to what it is today and they each bring enthusiasm, passion and a genuine belief in clubs ability to change for the better.   PGA Professionals Michelle Carroll and Gillian Burrell also played a pivotal role in piloting and developing the programme from a PGA Professional point of view.

Five years on and we are still learning. As a team we continue to improve the support we provide to clubs in subtle ways. For example, this year we have piloted a web portal which includes a range of resources for clubs regarding the running the programme – including our Get into Golf and Stay in Golf Guide. We have acknowledged that the struggle for clubs in most cases is in retaining the participants of the original programme and we now have a three year commitment of support to clubs to help them create a sustainable environment for recruiting and retaining new members. 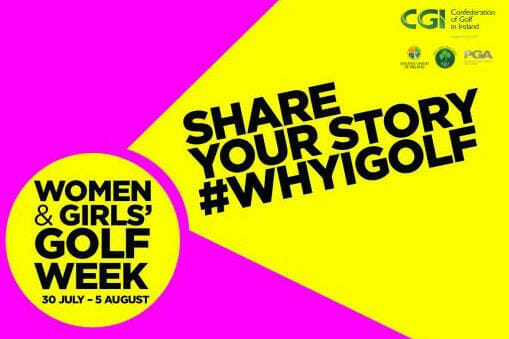 CGI Support
Do all the clubs we work with have the same success? Simply put, no. Each clubs expectations are different, each clubs input is different. As mentioned above, our team cannot offer clubs a magic want or a short cut to success. We can provide them with models of good practice and a range of ideas on how to recruit and retain participants as well as continued support. After that, it is over to the club, who create their own magic.

As always, our entire team are very thankful for the continued hard work of PGA Professionals and Volunteers across the country who help make these programmes such a success. We are delighted to be a part of Women and Girls’ Golf week which has created some noise in relation to the female game and acknowledging all aspects which make it a success!