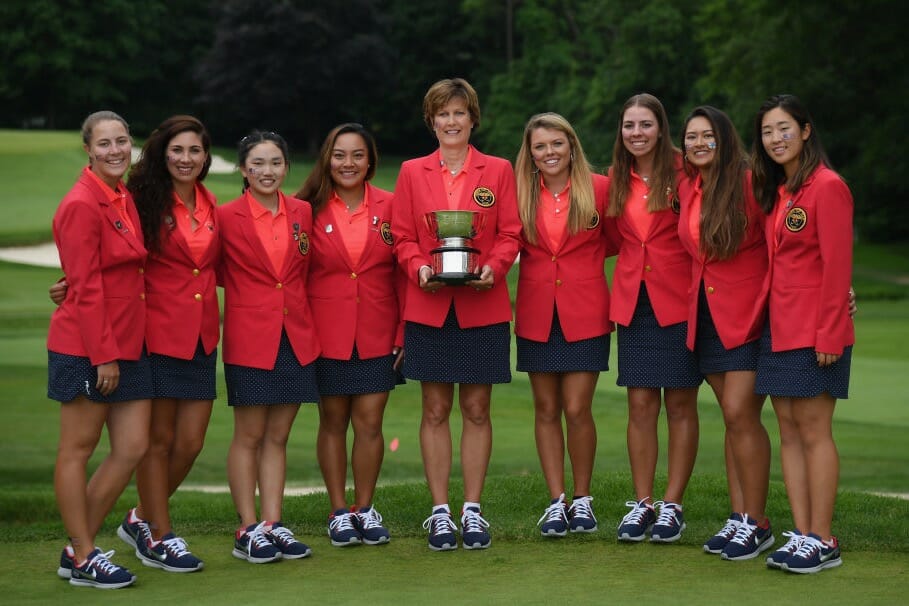 The United States’ points total is the highest recorded by any team in the Curtis Cup since they defeated GB&I 14½-3½ at Denver Country Club in 1982 and the winning margin of fourteen points also surpassed the record of eleven points set in that same match.

GB&I were on the back foot from day one with the USA  taking a two point lead which they then extended to six points on day two and led 9-3  going into Sunday’s singles matches following the initial six foursomes matches and six fourballs matches played over the first two days. This left the USA needing only 1.5 points from the singles to win the match.

So it was a case of all of nothing for GB&I and while they battled hard there were to be no miracles as Sophia Schubert extended the lead for the home side to 10-3 after beating Olivia Mehaffey 2&1 in the first match.

Moments later, Kristen Gillman secured the vital point which clinched the Curtis Cup for the United States after a comprehensive 5&4 win over Annabell Fuller gave them an unassailable 11-3 lead.

In doing so, Gillman became only the third player after Stacey Lewis (2008) and Bronte Law (2016) to go 5-0-0 in a single Curtis Cup match since the new three-day format was introduced.

Elaine Farquharson-Black, Captain, Great Britain and Ireland said, “We’re obviously very disappointed with the scoreline and all you can do is congratulate the United States on their win and the very high standard of golf they have played this week.

“We have played good golf in spells, particularly on the first day, but at this level you have to have more consistency and at times we’ve just not performed as well as we would have liked.

“We have a very young team and the players will have learned lots from this experience which will stand them in good stead for the future. They have given it their all this in this match and I’m very proud of them.”

15-year-old Lucy Li added a 5&4 victory against India Clyburn before Jennifer Kupcho’s 2&1 success over Lily May Humphreys made it 13-3 to the United States.

A long-range birdie from the world’s leading woman amateur golfer Lilia Vu made sure of a win against Sophie Lamb by two holes. Andrea Lee closed her match out against Alice Hewson on the 17th hole to win 2&1 and give her side a 15-3 lead.

Lauren Stephenson sealed her match against Shannon McWilliam in style with a fantastic birdie putt which dropped from around 12 feet to give the 20-year-old a 2&1 victory.

Mariel Galdiano defeated Paula Grant by one hole in the last match out on the course to give the United States a 17-3 win and Virginia Derby Grimes, Captain, United States said, “It’s a great feeling and of course I’ve never been on a losing side. It’s good to see the team get to experience that winning feeling. “Last night we just talked a little bit and I just told them to enjoy the moment and be patient on the greens. The whole week has been phenomenal and I can’t say any one moment has stood out. There have been so many great moments.”

The 41st Curtis Cup match will be played at Conwy (Caernarvonshire) Golf Club in Wales from 12-14 June 2020.