Kinsale’s John Murphy brilliantly tamed the famed Old Course with a sizzling six-under par 66 as he looks to celebrate an early 20th birthday with victory in the prestigious St Andrews Links Trophy.

Murphy turns 20 next Tuesday and after posting a Friday opening score of one-under par 70 on the adjoining New Course he managed an eagle and five birdies to move into second place at seven-under par heading to Sunday’s 36-hole finale at the Home of Golf.

Murphy played wedge shots into both the first and the second, holing respective putts of three feet and eight feet. He then missed a three-footer at the third and while Murphy dropped a shot at the fourth, the University of Louisville, Kentucky Marketing student sensationally made amends in holing a 102-yard 60-degree lob-wedge shot for an eagle ‘2’ at the par-4 sixth hole.

Murphy was on a roll hitting a 5-iron into the par-3 eighth hole and holing a 25-foot birdie putt to be four-under par for his round and then moved to five-under in landing a wedge to eight-feet at the short par-4 ninth before moving to six-under for the day in sinking a four-footer for birdie at the par-4 10th hole.

Murphy then played steadily over his closing seven holes, carving out solid pars, particularly at the 16th and the famed  ‘Road Hole’ at 17th,  and went close to posting a 65 in just missing his birdie putt on the last.

“I am really pleased with a 66 and with my birthday in three days.  It will be all one shot at time over the last two rounds,” he said.

“I just enjoyed the experience so much today of playing the Old Course and I got off to a great start that really was a key to my round. I was a little disappointed in dropping a shot at four so I was standing over my second shot at the sixth and I said to myself ‘just hit this one close enough that you can’t miss and it went in’.

“So, that was a nice bonus and after a near miss on seven, I holed that 25-footer on eight and that was the first long putt I holed over these two days.”

“I then capitalised with a birdie on nine and then ran my second shot up the slope in front of the green and with my ball stopping about four-feet from the pin, so that was another great birdie.”

“The rest of the back nine was very tough in the conditions but I did not want to have the mentality of just making pars as I told myself to keep pushing and try and make birdies, but given how tough it was par is a good score including two-putting both 16 and 17 from long ranges for pars.

Bizarrely, the last time Murphy competed at the Old Course was alongside England’s Laird Shepherd who added a 70 to his opening 65 to lead the field by a shot at eight-under par.

And now Murphy and Shepherd will go at it over Sunday’s concluding two rounds on the Old Course.

“I played in an event here at St. Andrews last year in an R & A versus tournament and the winner got to play in the Arnold Palmer Cup, and after leading the opening two rounds, I was in the final group with Blair,” said Murphy.

“So, it looks like it will be Blair and myself tomorrow.” 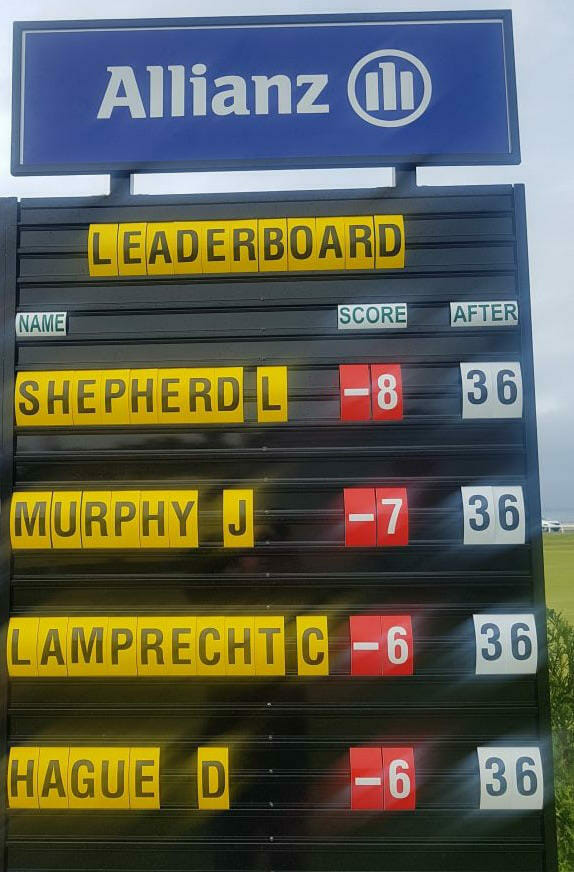 It was two years ago, Murphy capped off a remarkable 2016 season announcing he was heading to the US in the second half of 2017 on a golf scholarship and joining the University of Louisville ‘Cardinals’ golf team.

And now after a full year with the ‘Cardinals’ Murphy will use his Stateside experience in striving to become just the third Irish golfer, since the inaugural event in 1989, to win the Links Trophy.

“I got back home at the end of May after my first year with the University of Louisville and I would like to think that after 12-months on the golf team I am a better golfer,” he said.

“I haven’t been producing the scores to prove that but I am certain most aspects of my game are better for the experience. I am also now quietly-excited about what lays ahead as it’s been some time since I have been in contention in a tournament.”

“The Home of Golf is also just a fabulous place to be in contention to win and looking at the list of past winners there is some great past winners.”

The pick of those was a then 16-year old representing the North Hants club who in 2013 would win a U.S. Open – Justin Rose.

The 143 cut-off mark ahead of Sunday’s 36-hole decider meant Naas golfer Jonathan Yates is the only other Irishman joining Murphy.