2017 was a game changer for Peter O’Keeffe when he won the Flogas Irish Amateur Open and this week he is heading back to Royal County Down to defend his title, writes Niall O’Shea

After returning to the amateur game in 2016, O’Keeffe battled hard for a win until finally winning three scratch cups at the end of that season. 2017 put quite a different complexion on things for the big hitting Douglas man as the win in the Flogas Irish Amateur Open was followed by a win in Tralee, selection for Ireland, and a place on the record breaking four in a row Home Internationals team.

The Flogas Irish Open:
What are your memories from Royal County Down? Were you at your peak and did you sustain that level?

I knew heading to Royal County Down that I was playing well.  I had finished second the week previous at the Munster Strokeplay and felt that was an event I really should have won.  I called to Carton House on the way to there and I had one of the best sessions with Noel Fox.  We actually speculated that I was hitting the ball so well that if the wind blew I’d have a real chance to win.  I had never played RCD before last year but I knew the minute I got there I was going to have a good week.  Links golf is by far and away my favourite style of golf so I really enjoy getting to know a links course.  I had a nice sense of calm all through the week.  I always strive to improve my technique to where I can trust it and focus on ‘golfing my ball’ rather than being technical and I really did that very well which made the whole experience all the more enjoyable.  I remember the week being an exceptional ball striking week – particularly the last two rounds where the wind got up, I was hitting it long and straight in some tough conditions. I worked hard in the practice rounds on my pace putting and chip and run shots too – so I had prepared well.

What did you do with the trophy – it’s a pretty historic and valuable cup, did you bring it to many events?

I sat the trophy on our hall table at home, and it was the first thing I saw every day coming home from work.  It’s funny how attached you can get to a major trophy when you see it every day.  It was amazing to study the names on the trophy and see all of the winners down through the years.  I’m not a big drinker so there was no filling the trophy up with any mad cocktails.  Douglas Golf Club did have a few nights at the club to recognize some of the great achievements we had this year as a club so I did bring it along there too.

What will it be like going back to RCD, will there be any pressure – what expectations will you have and how has the expectation changed from last year?

I expect to contend in every event I enter.  I don’t think that brings any pressure as that’s  my own level of expectation.  I know what preparation works for me and if things don’t go to plan on any given week, I regroup and apply myself to the next event.  I have my own ways when approaching a tournament.  I avoid hotels at all costs – I like to rent a house so I can cook my own food etc.  I think that’s a huge plus in the week of an event.  Looking forward to the Flogas Irish Amateur Open this year, if I can have ‘a comfortable technical week’, I should do well.  I drove the ball so straight for the season last year so that’s going to be a big part of my preparation.  Overall I am really looking forward to getting back to Royal County Down.

Outside of the Flogas Irish Open, are there any particular goals you’re set for yourself for 2018?

I have goals but I like to focus on the process.  I have learned that when all the smaller things are done extremely well, results tend to follow. 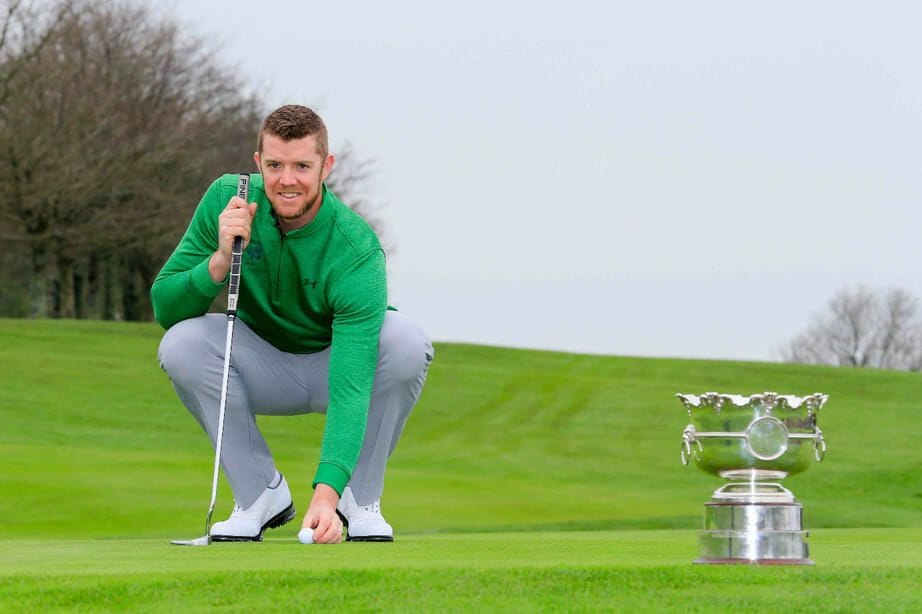 Off-Season & Practice/Training:
How has your training gone in the off-season, and what’s your plan to warm up for this year’s Flogas Irish Amateur Open?

I’ve just returned from Florida where I was playing on the GB&I team in the Concession Cup which has been a big eye opener for me.  I fought my swing all week on a golf course that demands absolute precision and unfortunately I was a little bit off all week.  It didn’t help that I was up against Stewart Hagestad [Masters leading amateur 2017] three days in a row… what a player he is.  I came away from that thinking that I need to work harder.  Golf is a funny sport, he was in the field in the Flogas Irish Amateur last year but looked like a different animal this time around.  I have played the West and I will play some scratch cups around Cork and I’m really looking forward to going back to Tralee to defend the Kerry Scratch Cup.  It’s a great event on a super golf course.

My mind never rests in general…. Did I take a break? I tried to after the home internationals but sometimes when your office has a swing studio breaks can be tough.  I guess the answer is no. I tried to, but it didn’t happen.

How would you rate your swing now – given that you spent another winter working on improving it?

I rarely like a swing I see on camera.  It is so much better in certain parts since I’ve started working with Noel Fox.  Phase one was to improve impact which was last year, we are tackling backswing and marrying the two right now which is tough, but I have to commit to the change.

Are you a tinkerer?  Will you keep working on your swing or do you think you’ll reach a stage where you’re happy?

I love studying technique.  I am always watching videos of my swing and swings of others. I have no problem taking a video of someone’s swing whom I may be competing against, if I can learn from another swing and how it produces a ball flight I am happy, I am learning. I’ll always strive for technical perfection… or as close as I can get.

The Irish Team:
You made the Irish Team last year – everybody else made a big deal about it, saying it was 10 years overdue.  How did you feel about it when you got the call?

I was delighted to be on the team and was happy enough with how I played.  Being part of a winning team is always nice.  There are some really good players in Irish amateur golf at the moment, it’s nice to be winning with them wearing the green.

What was the Home International win like, was the team experience as you expected (it’s been a while since you played team golf apart from the inter-pros)?

The one thing that I noticed was that the new caps were included and involved and it felt like we’d been there for years.  We had a plan and the plan was to win one match at a time.  In fairness to Tony Goode, he did mention in a team meeting that every ½ point would be crucial, it was a good call as we eventually won by exactly ½ point!

What’s it like being part of the panel this year, any new experiences and have you learned anything new?

It’s great being a member of the national panel.  It was a pity I had to pull out of the South Africa trip.  It was great to be selected but nearly 2.5 weeks away from my business commitments was too much for me.

Ireland are on a drive for five – how exciting is that, and are you hoping to be part of it?

Yes, that would be nice.  I’ll be focusing on my own bubble for the season in terms of my personal goals and if it’s good enough to retain my place on the Irish Team, then I will be more than ready.

O’Keeffe Golf Performance:
How’s the day job these days and is there still a big demand from golfers?

Work is going well.  I love the health and fitness industry and it’s nice to have a golf fitness arm to our business.  In addition to a large number of individual clients I’m working with college teams, club teams and now also with the GUI and the Munster Under 16 panel which is great.

Is balancing a full-time job with elite amateur golf possible for you do you think?

Yes – but it is challenging.  I obviously can’t play in every event which goes against me in terms of gaining WAGR points etc., but it is what it is.  I sit down at the start of the year and plan out what I can commit to.  I do have a bit of flexibility in my work schedule so I am very lucky in that sense.

You have a lot of content on the OKGP YouTube Channel, is there good engagement, and is it just for clients or can anyone benefit from it?

I use the YouTube channel as a database of video content I will use when designing programs for people.  I like to post videos that people can learn something from, clients like the fact that they can study the exercises while working outside of the training programme with me.  Obviously anyone can watch the videos but I know the real value comes from participating in a programme.

Married life is great. Mary-Claire is a great supporter to me in everything and she knows me inside out. She enjoys the golf events too which is great.  We’re just back from the Concession Cup and while the results didn’t go our way it was a great trip.