Four Irish competitors will tee up at this year’s Concession Cup that will be hosted by The Concession Golf Club in Florida from April 16th to 21st.

Warrenpoint’s Colm Campbell will be joined by Douglas’ Peter O’Keefe in the Mid-Am category while elder statesman, Bangor’s Garth McGimspey and Dublin’s Adrian Morrow have been selected in the Senior and Over65’s categories respectively.
The GB&I team was chosen in the customary way as adopted by Walker Cups and other amateur international matches. Teams are selected by a selection committee based on a list of criteria that includes performance in National and International events together with reference to the WAGR™. For the four Irish on the panel, it only goes to further highlight the wonderful feats of consistency each displayed last year.
Florida awaits and the biennial team match-play competition that features Mid-Am and Senior-Am competitors representing the United States and GB&I. The event promises to showcase top amateur golfers from both regions in the true spirit, character and competitiveness of amateur golf, all for the benefit of charity.

Players will compete over three days through the traditional team match-play formats of foursome, fourball and singles. Each team will be comprised of 14 players separated into three categories: six (6) Mid-Am members (age 25 to 54), six (6) Senior members age 55 and older and two (2) Senior members age 65 and older.
Bob Lewis will captain the U.S. Team with Peter McEvoy taking the reigns for team GB&I. Lewis will lead the U.S. Team in defence of their back-to-back Concession Cup titles. McEvoy looks to steer the GB&I squad to victory and take the Sir Michael Bonallack and William Campbell Trophy across the pond for the first time. In McEvoy, GB&I may have found the man to do just that.

The 64 year old brings a wealth of competitive golf experience to the GB&I team. He is one of Great Britain’s most decorated amateur golfers. His outstanding career includes winning back-to-back British Amateur Championships in 1977 and 1978. Additionally, McEvoy represented Great Britain and Ireland as a player on five Walker Cup teams between 1977 and 1989.
He has shined during his career on two of golf’s biggest stages. He was the low amateur at The Open in 1978 and 1979 and in 1978 became the first British amateur golfer to make the cut at the Masters Tournament.
“It will be a great thrill to captain team GB&I,” said McEvoy. “I’m excited about the strength of our team and we look forward to the challenge of bringing home a victory. Plus, knowing that the Concession Cup is focused on giving back to charity makes my participation all the more rewarding.”
Congratulations to our four-strong contingent and may good golf go with you Stateside. 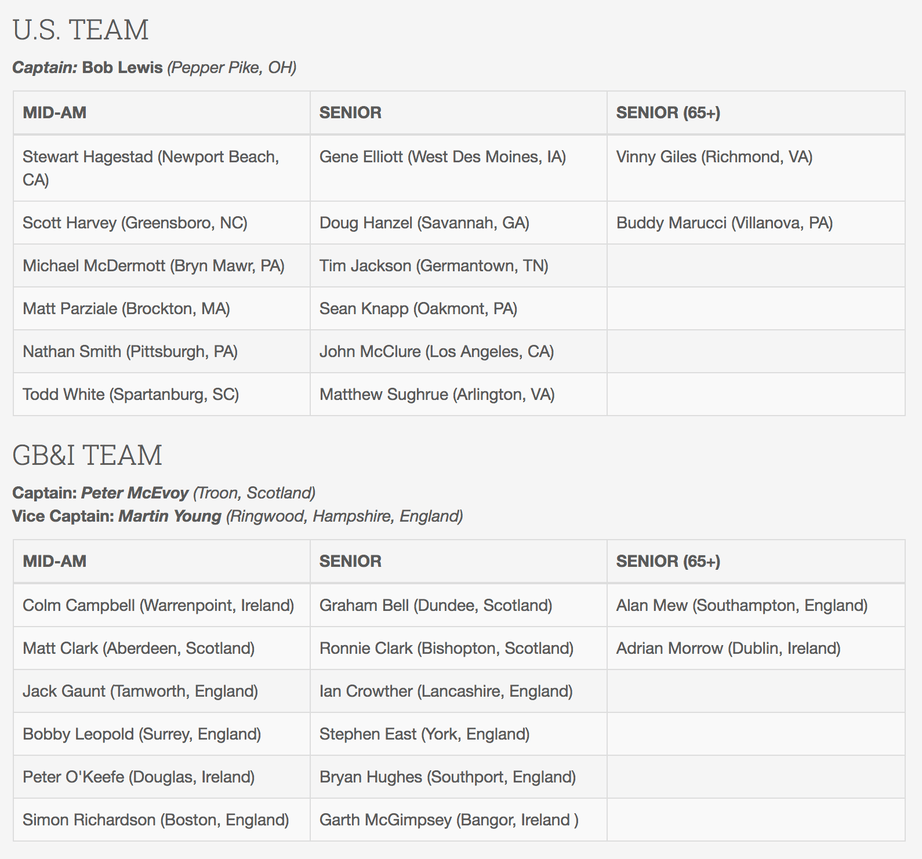