James Sugrue wrote his name into the history books on Sunday as he captured the famous South of Ireland at Lahinch.

The Mallow man joins Mervyn Owens and John McHenry as the only Cork winners in the past fifty years.  Sugrue qualified in the top half of the draw after the 36 hole strokeplay phase, and came through two matches on Friday to reach the final 16.  On Saturday he beat Gary O’Flaherty and John Murphy to set up a semi-final match with Peter O’Keeffe. In a tight match Sugrue beat O’Keeffe on the 17th, setting up a final against Conor O’Rourke from Naas.

O’Rourke had come through an epic 27 hole match on Saturday, believed to be the longest match in the history of the South by many locals.  The marathon test didn’t show on Saturday afternoon, or on Sunday morning as the Nass man motored on to the final.  Sugrue was motoring too although a quick tip from his caddy helped.  Speaking after his win, Sugrue admitted to a key piece of practice that helped him on Sunday.  “I was hitting the ball pretty well but I holed nothing [on the greens] in the strokeplay” said a very happy Sugrue.  “Mark McGrath caddied for me in the matchplay and he actually said it to me.  I have a putting drill so I focused on that and I putted much better in the semi-final and final.”

And the practice was key as Sugrue got off to the perfect start with a monster 30 foot birdie on the first to take the lead.  He extended that lead to two holes on the third hole when O’Rourke made a mistake and missed the green.  Sugrue kept the pressure on when he hit to par five 4th green in two and when O’Rourke missed his birdie putt the hole was conceded.  Sugrue was three up but that was short lived, he got into trouble at the back of the 5th green and lost the hole. 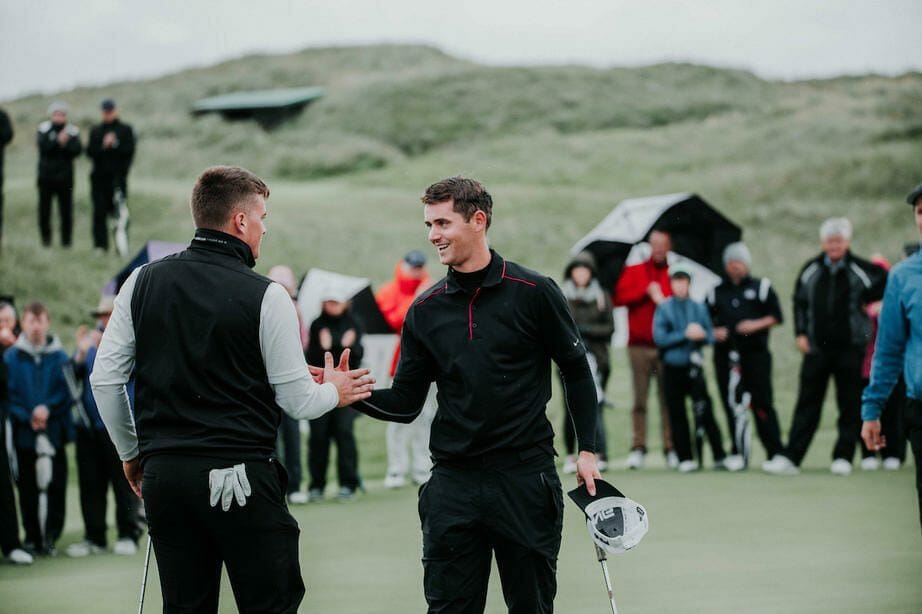 O Rourke and Sugrue at the end of the match

Sugrue maintained his two hole advantage through 6th and a par on the 7th saw him go three up again as O’Rourke couldn’t make par after finding trouble off the tee.  A three putt on eight cost Sugrue and a birdie from O’Rourke on 9 saw James turn on 1 up.  A par on the 10th was enough to give James the win and he holed a great 20 foot putt on the 11th for a half keeping him two ahead of O’Rourke.  Sugrue picked up another hole on the 14th and never looked back from there, winning 3&2 on the 16th to claim the historic trophy.

He now has a special 125th Anniversary Champions dinner to attend Monday night.  Paul McGinley and Darren Clarke are among the previous winners that will be in attendance as the 2017 Champion is feted as the winner of the famous South.