2010 Irish Close Champion and this year’s Leinster Women’s Team Captain Mary Dowling (New Ross) won the 9th hole with a par to level the match against Hermitage’s Ciara Casey in the first of the semi-finals. Dowling proceeded to win the 10th and by the 13th had a 2 hole advantage with 5 holes to play. Casey rallied however, winning the next 3 holes to head to the 17th 1 up. Casey closed out the match on the 17th green, 2&1.

Past International Sarah Cunningham (Ennis) and Paula Grant (Lisburn) would play for the second place in the 2017 Final. Grant, fresh from her successful week at the British Ladies Amateur, was in control of the match from the beginning and after turning 3up, she kept the pressure on, finally winning 4&3.

Chloe Ryan (Castletroy) had just the 7 birdies in her win over Shannon Burke (Ballinrobe) in the first of the Ita Wallace Plate Semi-Finals. Chloe showed a short iron masterclass, taking the pressure off her putter, however she held a substantial putt on the 15th green to close out the match. The second of the semi-finals was nip and tuck throughout, turning at all square. Lauren Walsh (Castlewarden) managed to get in front early on the back 9 but again Lanigan, who will represent Leinster on the Girls Interprovincial Team in Shannon in a couple of weeks, won the 16th with an eagle to go 1up and held on to close out the match on the 18th green.

After 4 days of play, and 78 competitors, the final two; Ciara Casey (Hermitage) and Paula Grant (Lisburn) battled for the title of Irish Close Champion 2017. The first two holes were halved and after a small error from Grant on the third Casey went 1 ahead. A superb shot from Grant on the 176 yard par 3 5th to within concession distance levelled the match once more. The pair traded holes over and back making the turn still level. It looked as though Casey was determined to win when she won the 10th and 11th to go 2up. It was then that Grant showed her experience by birdying the 12th and 13th to level the match and a birdie on the par 4 17th would be enough for her to be crowned 2017 Irish Women’s Close Championship for the second time in her career. 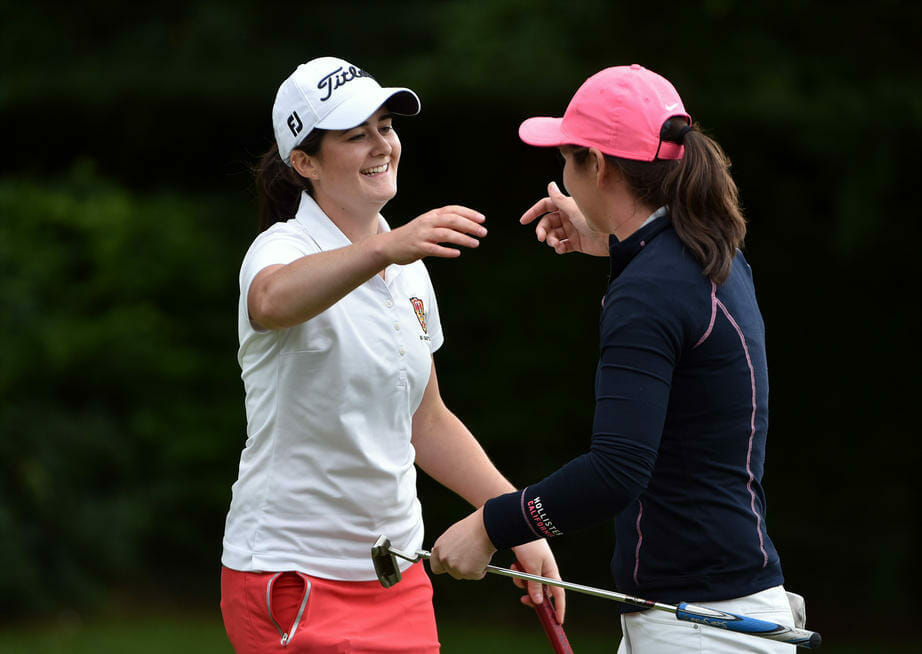 “I’m absolutely chuffed, I can’t believe it really, it hasn’t really sunk in yet but it feels good!” When asked did it feel different to her previous Irish Close win in 2013, in which she bet Lisa Maguire (Slieve Russell) on the 19th in Ballybunnion she said; “I felt more expectation this time but I felt a bit more in control as well, I just felt like I was a better golfer this time around! It feels different but still feels as good!”

Up ahead Chloe Ryan had gone 3up after 6 holes vs. Kate Lanigan. Lanigan then won two holes before the 10th but Chloe won 3 holes in quick succession to go 4up with 6 to play. The experienced international, who will travel with the Irish Team to the European Team Championships in Portugal in a couple of weeks, never let up and the match finished 4&2 in favour of the Limerick woman.

The course at Mullingar has impressed many, none moreso than the Champion herself, “I’ve absolutely loved the golf course, it was set up so well and the greens are lovely, they were getting faster and faster every day! My home course, Lisburn, is a parkland too so I knew the course was going to suit me as you just had to keep it straight off the tee and putt well which is what I did!”