More success for Maguire as she claims ANNIKA Award

It was more top class honours for world number one Leona Maguire as she was named the 2017 winner of the ANNIKA Award Presented by 3M.

Maguire who is going into her senior year at Duke captured the award for the second time in three years after first earning the honour in 2015.
The award is voted on by college golfers, coaches and members of the golf media and Mcguire now becomes the first two-time winner of the award.
“This award is a huge honor for me,” Maguire said on Golf Channel. “It’s something I’m very, very proud of to get the opportunity to win again.”

After Mcguire had opted not to go to the final stage of the LPGA Q-School last year and decided to remain at Duke University to complete the last two years of her psychology degree her results went from strength to strength.
She racked up top-three finishes in her first three starts of the fall series then claimed three wins in spring with her worst finish a share of sixth.
In total, Maguire had three wins, two seconds and three thirds in 2016-17, including her second win in the ACC Championship triumph and a tied for second at the NCAA Championship.
She ended the season ranked No. 1 in the World Amateur Golf Ranking.

She was named the 2017 Women’s Golf Coaches Association National Player of the Year shortly after the NCAAs and has clearly been the dominant player on the US college scene since she produced three wins in her freshman year with just one of her finishes outside the top 10.
In 30 stroke-play events in college, Maguire has had seven wins and 26 top-10 finishes but she’s hungry to improve and hit the ground running as a professional next May after her graduation from Duke. 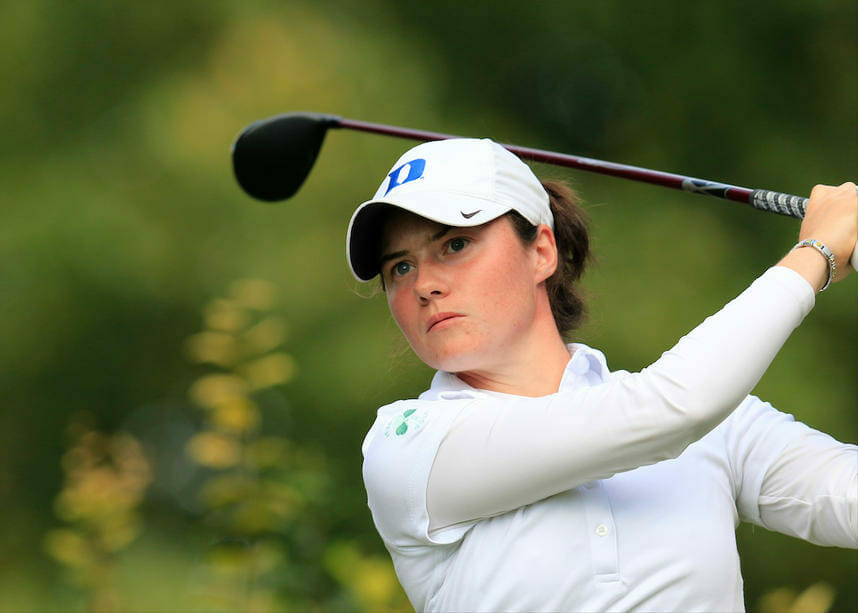 As she prepares to tee it up in next week’s British Amateur Championship before competing for GB&I in the Vagliano Trophy, she has been working hard on her short game and putting so she can contend in the Women’s US Open, the LPGA Tour’s Marathon Classic and the RICOH Women’s British Open before heading back to South Carolina to prepare for her final college season.
At last year’s Olympic Games Leona seen first-hand that it’s the not long driving that will make or break her in the pro ranks and she has changed her focus onto the scoring clubs to hit the ground running.

“I have been working on my putting a lot because my iron play has always been good so I give myself a lot of chances and I want to make the most of them,” Leona said. “The big focus has been on my putting for the last few months.”
“Playing with Lydia Ko in Rio, I could see she didn’t hit the ball that much further than me but from 100 yards and in she was beside the pin every time and then in the hole. That’s the difference.”
“A lot of my practice is on wedges and putting now, playing little games against my sister Lisa and my team-mates and spending more time on the course trying to get a bit better in that department.”

Maguire’s focus now is clearly on being ready to make a smooth transition to the LPGA Tour next year.
“I go back in August but I will play some pro events and be ready to go pro in May next year,” she said. “I will have a pretty full schedule because I have quite a few invites lined up. So hopefully I can get my card that way and make that transition as quickly as possible, so I can get out there with the best of them.”
The Slieve Russell star believes that four years crisscrossing the US to play strokeplay events against the best amateurs in the world is the best preparation possible for a successful professional career.
“The big thing is just going from one tournament to another from week to week,” she said. “It’s like a mini tour in itself, and the three-round strokeplay events are good preparation.
“We only play matchplay at nationals, so it’s really good for getting you into the mindset that you have to compete, week-in, week-out.
“Having your university work as well teaches you to manage your time and practice as efficiently as possible.”
She admits that there will be pressure, but she believes she will be ready.
“Having played quite a few professional events now and travelled week to week in college, I know what to expect,” she said.
“It’s definitely a step up from the amateur game, playing three or four weeks on the trot as opposed to every few weeks in the amateur game.
“That will take a bit of getting used to and it will take a while to get used to new courses and the longer set-ups. But in general, I think if can make my game a little tidier that will help. There is nothing major glaring at me.”

Reigning US Women’s Open champion and former Duke star Brittany Lang is a source of inspiration, but Leona also has the ear of 2014 European Ryder Cup captain Paul McGinley.
“I got to play a practice round with Brittany before she won the US Open last year and she’s always there to give advice,” she said. “And Paul McGinley is great as well and there to answer any questions.”
Pyle & Kenfig is her next stop as she tees it up in Ladies British Open Amateur Championship next week.
“I’m looking forward to whatever comes next” Leona added.
The road to success seems to be paved perfectly for Maguire.