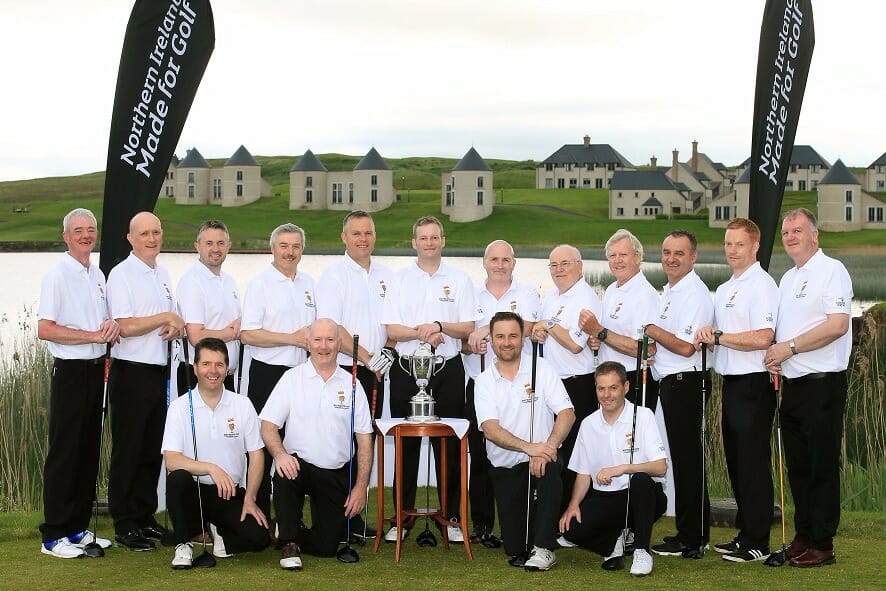 On the hottest day of the year so far the Irish team turned in a memorable performance to retain the Kings Cup against the USA at Lough Erne Golf Resort.

Leading by 30 points going into the 16 singles matches Ireland squeezed over the finish line by a mere eight points as the USA put on a comeback performance.

Under King’s Cup rules, players receive two points for a hole won, one point each for a hole halved and nothing for a lost hole with Ireland having the better of things on the opening day, finishing a series of fourball and greensomes matches with 303 points to the USA’s 273 points.

With the singles left to play, Ireland needed to break the 576 point marker to retain the title but found the USA side in no mood to roll over as they put on a comeback show winning nine of the 16 singles ties but Ireland’s overnight buffer and a superb individual effort from Irvinestown’s Martin Peters (Donegal GC), who beat Joseph Costello (Tijares Creek) 27-9, saw Ireland home.

“Even though it’s friendly competition, there is still a lot of pride involved as you are representing your country and playing for your team mates so I was focused on doing well today,” said the 37-year-old Irvinestown based Peters.

“I got ahead around the sixth and from there on I stayed in control. In match play you have to try and keep the pressure on. Keep getting up on the tee first and finding the fairway.”

International King’s Cup founder, Larry Lunsford was disappointed to lose for a second time but bouyed by a strong fightback, “All I can say is that I am proud of the team for making such a huge comeback on the last day. It was remarkable, better than anything I have ever seen,” he said.

“You know, when we made the turn the teams were level on the day so to make up 22 points over the closing nine holes was a great effort.”