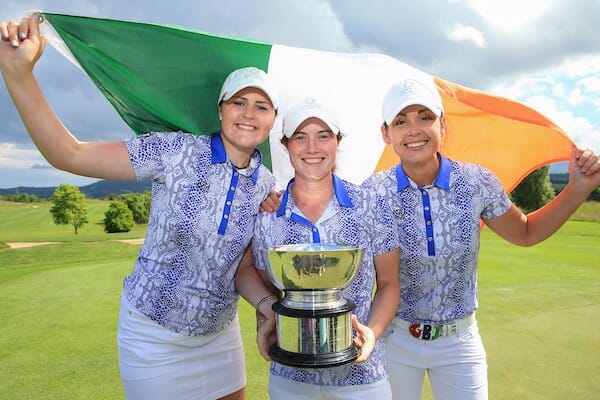 The Great Britain and Ireland team to face the Continent of Europe in the Vagliano Trophy match at Golf Club Bogogno in Italy on 30 June and 1 July was announced by The R&A today.

The team selection is great news for Ireland who have four representatives in total with Annabel Wilson (Lurgan) joining Olivia Mehaffey (RCD Ladies), Maria Dunne (Skerries) and Leona Maguire (Slieve Russell) who will rekindle their player-coach relationship with Elaine Farquharson-Black who captained them for the Curtis Cup matches at Dun Laoghaire last year.   On the junior team Sarah Byrne (Douglas) has been named in the starters with Beth Coulter (Kirkistown Castle) as a reserve.

Elaine Farquharson-Black, who led GB&I to a memorable 11½-8½ win over the USA in the Curtis Cup at Dun Laoghaire last year, will captain the team and the Aberdeen-based lawyer will be looking to reverse a run of five consecutive wins by the Continent of Europe. Claire Coughlan-Ryan continues in her role as captain of the Under-16 team to play in the Junior Vagliano Trophy match which runs parallel to the women’s competition.

Commenting on the squad Farquharson-Black said, “’I am looking forward to a great match. We have an excellent team, with a blend of youth and experience.”

The eight player GB&I team, which has been reduced from nine as in previous years, for the Vagliano Trophy match is:

Not since a 13-11 win over the Continent of Europe at Chantilly twelve years ago has GB&I lifted the Vagliano Trophy. A close match in 2015 ended 12½-11½ at the Malone Golf Club. The junior side were also defeated 10½– 7½ in Northern Ireland.

However, GB&I’s chances may be boosted by the inclusion of Leona Maguire, who is currently the number one women’s golfer in the World Amateur Golf Ranking (WAGR). Maguire, who represented Ireland at the Rio Olympics last year, chose to retain her amateur status and finish a degree at Duke University in the United States rather than pursue qualification for the LPGA Tour.
Sixteen-year-old Annabel Wilson also joins the team as the youngest member.

Alice Hewson, India Clyburn, Gemma Clews and Sophie Lamb from England make up the rest of the team to face the continent of Europe. WAGR number 38 Hewson, the highest ranked player from the English contingent and member of the victorious 2016 GB&I Curtis Cup team, finished runner-up in The Schooner Fall Classic and tied fourth in the English Women’s Amateur in 2016.
Both Hewson and Clews previously represented GB&I in the Vagliano Trophy and made up the England side that competed in the Espirito Santo Trophy at the World Amateur Team Championships. Clyburn is included following her victory in the Mercedes Collegiate with NC State University in 2016.

Farquharson-Black may choose to reunite Clews and Lamb, who plays in her first Vagliano Trophy after winning the British Women’s Stroke Play Championship in 2016, after the pair helped England to retain the Seve Ballesteros Trophy earlier this month at El Saler Golf Club in Valencia.