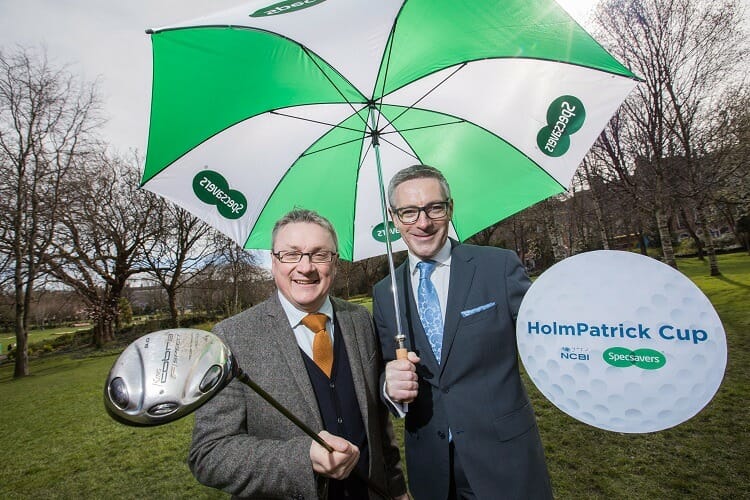 Specsavers have announced a charity partnership with the National Council for the Blind of Ireland, which will include a two-year title sponsorship of the prestigious HolmPatrick Cup and fundraising of at least €30,000.

The national all-island competition was founded in 1932 and is the longest running and largest charity golf tournament in Ireland. The money raised goes directly to fund the NCBI’s life-enhancing services, which help over 8,000 people with sight loss as well their families.

The NCBI Specsavers HolmPatrick Cup will see GUI-affiliated golf courses across the country hold a qualifying tournament, the winners of which will qualify for the county final and compete for a place at the provincial tournament. The four provincial winners will then play at the final, which is hosted at the world-renowned St Andrew’s Links in Scotland.

Speaking at the announcement, vice-chair of Specsavers Ireland Kerril Hickey said: ‘We are proud to support the National Council for the Blind of Ireland, which is the perfect partner for Specsavers. There are currently over 51,000 people in Ireland living with blindness and vision impairment and this figure is rising. As many as 75% of all cases are preventable so we are joining forces with NCBI to help educate people about the importance of regular eye tests. I would encourage golfers of all levels across the country to swing into action and participate in the NCBI Specsavers HolmPatrick Cup to raise awareness, vital funds and have some fun. It is also a fantastic opportunity to play at the home of golf in Scotland.’

CEO of the National Council for the Blind of Ireland Chris White added: ‘The NCBI Specsavers HolmPatrick Cup is Ireland’s longest running charity golf competition and is 85 years old this year. We are delighted to have Specsavers on board as a charity partner for the next two years. Both of our organisations have such a wide reach throughout Ireland – between us we are in every community in the country. That really allows us to focus on our shared priorities, which are the prevention of sight loss and the importance of early detection of through education and awareness of eye health.’

Now in its 85th year, the annual HolmPatrick Cup is named after Edina Conyngham, Baroness HolmPatrick who donated the trophy to NCBI at its inauguration.

NCBI (National Council for the Blind of Ireland) is Ireland’s national charity working for the rising number of people affected by sight loss. Its practical and emotional advice and supports help 8,000 people and their families face their futures with confidence every year. NCBI advocates for people with sight loss to have the same rights, opportunities and choices as others. www.ncbi.ie.

For more information on Specsavers please visit www.specsavers.ie. To sign up to the NCBI Specsavers HolmPatrick Cup please call (01) 882 1939 or visit www.ncbiholmpatrickcup.com.