Dawson and Ireland move into gear at Sotogrande 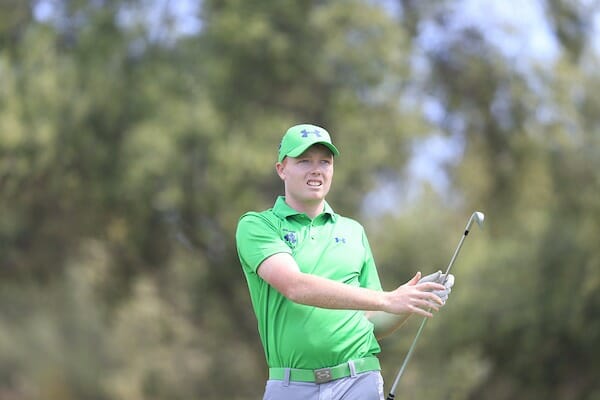 It was a good day for the Irish team at the European Nations Cups in Sotogrande, Spain as Robin Dawson took control at the top of the leaderboard and the team moved into second place overall.

After a some great early season form Robin Dawson is once again the master of his own destiny as he sits on top of the leaderboard in the individual standings following rounds of 71 on day one and a best of the day 69 on day two. He is joined on four under by Jack Davidson of Wales and these two hold a commanding six stroke lead over third placed David Booth, also from Wales.

Scoring on day two seemed a bit easier than day one with conditions calming slightly, although the greens were still running exceptionally fast. and overnight leader Markus Braadlie from Norway followed his leading opening score 68 with an 80 to fall back into fourth place.

Stuart Grehan (Tullamore) had a good day as he recorded a level par 72 which moved him up the leaderboard considerably from 36th to T8 position on +6, while Alex Gleeson (Castle) carded a 75 to finish T19 on +8. Ireland’s other competitor, Kevin Le Blanc, didn’t have the best of days as he finished with an 81 to add to his opening day 79 and lies in T58 on +16.