Snow and heavy rain rendered the course unplayable and after consulting with course staff, Tournament Director Dave Prendergast had no option but to cancel the final round with the results from 36 holes declared.  Murphy finished on a total of 138 (-6) for the 36 holes, four shots clear of James McVicker (Knock) who took second place.

The ladies competition was won by IGM contributor Mary Doyle (The Heath).  Doyle led both rounds, an opening 71 (-3) was followed by a 75 in testing conditions.  She finished on 146 (-2), six shots ahead of second placed Shannon Burke (Ballinrobe).  Rachel McDonnell (Elm Park) was third one shot back from Burke. 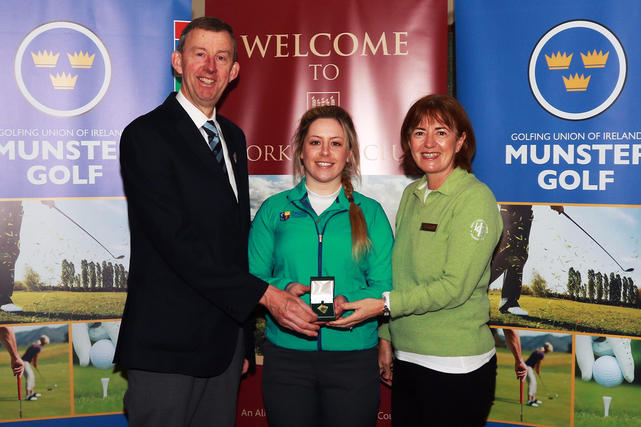 It was Murphy’s second Munster title, the Irish Boys international won the Munster Boys title in 2016.  “It feels good, it’s a great start to the year” said Murphy.  “It’s a long season so it’s a confidence boost to get an early win.  Monday was a little disappointing, especially on the back nine.  Yesterday I was happy to be on -4 through 10 as I wasn’t playing my best.  I missed a few chances on the way in yesterday, I hit a poor tee shot on 16th but scrambled a par which kept me on track.”  His 68 in the second round tied for the lowest score on the day, keeping him ahead of the field.  Murphy has a busy few weeks ahead as the season gets into full swing: “I’m playing in St Andrew’s next week for the Bursar’s Tournament and then I’m playing in London in the Berkhamsted Trophy.  After that I’m off to the West of Ireland, it’s my first time playing in that so I’m looking forward to the challenge.  It’s busy but I’m looking forward to these events as my game is in good shape.”

The winning team was Maynooth Scholars (B), comprised of Eanna Griffin, Cathal Butler and Kyle McCarron.