The ins and outs of golf cub membership

The value of being a golf club member has waned in recent years. People don’t see it in the same way as 10/15 years ago. The recession is the key culprit and it is little surprise that people stopped paying their subs. After all, which is more important: paying your annual sub or paying your mortgage?

Golf clubs themselves have to accept some of the blame. First came the enormous entrance fees and then, in a matter of months, it found reverse gear as entrance fees were removed almost altogether. Members who had paid thousands to join a club found that a month later new members didn’t have to pay anything. How could that not lead to internal problems!

And now, with no entrance fee, there is nothing to stop golfers jumping from one club to another, taking advantage of the best deal on offer. Why wouldn’t you? You save money and you get to play a different course. This is one of the biggest challenges facing golf clubs today because there are so many tempting offers (see below) that it is easy to hop from place to place. Yes, a great club can hold on to members if the course is good and the social harmony of the members is strong, but ultimately money talks… and the ‘itinerant golfer’ has taken to joining a club with friends so that any sense of inclusion is irrelevant as they stick to their clique.

Entrance fees serve a purpose. They may not be popular and they reinforce that air of exclusivity that surrounds the game, but they serve a purpose. Most importantly, they build loyalty. If you pay €5,000 to join a club then you’re not walking away when your first year is over. Just the opposite. You’ll be invested in the club and the course. You’ll want to see it thrive because you want to play somewhere that is as good as it can be. I’ve been a member at Greystones for as long as I can remember. I played there with my grandfather as a six year old. I was a junior, a student and now a full member. There is a definite sense of belonging.
I’m not suggesting that every club should have an entrance fee but clubs do need to look at ways to make membership and the very idea of membership more attractive. As someone who worked in marketing for years, I can tell you that loyalty is hard earned and easily lost. Understanding who your audience is and what those people want is the key to building loyalty. (Surveys serve a purpose in this regard.)

The Next Move
If you’re thinking of joining a club or moving club, or if you’re a club looking at a membership drive here are 18 questions to consider:
What are you looking for in a club, how good is the course, how well is it maintained throughout the year, is drainage an issue, are temporary greens in play for five months, is it a genuinely friendly club and clubhouse, what is the age profile of the members, can you get lessons, will your kids be welcomed, how easy is it to get a tee time at weekends, what are dress code/mobile phone policies, how close are you to a town, what extra-curricular activities are there, how good is the food, how strong are the teams, what about levies and future improvements, and what do members of neighboring clubs think of the club/course? In addition, what programmes are run for new members?

This is not a definitive list. What one person wants from a club is very different to what somebody else wants. Clubs that understand and accommodate such differences will find it easier to hold on to members and attract new ones.

Attracting New Members
Offering cheap subscriptions is like offering 50% off a pack of Jacobs biscuits. Customers will lap it up… but when Cadburys make the same offer next week and the Jacobs offer has ended, which brand do you think these people will buy?

If you offer a €400 sub in year 1, which then rises to €800 in year 2, why wouldn’t a golfer pack up after year 1 and head to the club down the road offering that same €400 deal. That €800 second year fee has to come with something extra to show new members that there is value in membership.

Many of today’s offers focus on giving 16 months’ membership for the price of the annual sub. They may kick off in September/October, and last till December the following year. Or, as outlined above, there is the sliding scale of increasing fees. Clubs that are part of hotels often offer special B&B rates or half price gym memberships. Some clubs will offer free green fees, which will encourage a new member to bring friends… who then may join the club too. Other clubs see opportunities by combining forces with courses elsewhere in the country to offer reciprocal playing rights – something which benefits all members.

Juniors and ladies are popular targets, as are couples, and golfers within these groups can expect generous welcome deals/discounts. So can the Under 30/35 cohort.
Existing members who convince a friend to join will often receive a discount on their own annual sub. Less is made of creating family memberships which is disappointing as this is an excellent opportunity for golf clubs, both for on-course activity and in-clubhouse expenditure.
The CGI continues its great work around the country introducing new blood to the game. The feedback from the clubs which have hosted ‘Get into Golf’ events is extremely positive with all reporting new members. One great example is Royal Tara’s eight week programme which attracted 64 new members. Ireland has well over 400 golf courses and if the success rate enjoyed at Royal Tara was repeated across just 50 clubs, the game would be richer by 3,200 members. Their case study is on the CGI website.

Loyalty Swings Both Ways
Golfers need to appreciate that their loyalty is essential to a club’s continuing success. The reverse is also true. Golf clubs have got to get the idea that membership is a privilege out of their heads. Loyalty to members needs to be part and parcel of membership every year… for every member. Make membership mean something and show them that membership has its rewards. Here are some thoughts:
Greystones run ‘new member’ evenings where new and existing members mingle. It is an easy and friendly introduction to the club.
Clubs could arrange free lessons/activities for children of members during the Easter break. At the end, hand out leaflets for the summer junior camps with a discounted fee for anyone who books early.

Castlemartyr recently held an exclusive members night, where the legendary Peter Alliss discussed his life in the game and behind the microphone with Greg Allen. It was standing room only. Greystones invited Karl Morris, the performance coach, to discuss the mind-set required to shoot lower scores. 200 members attended and it proved so popular that Karl was invited back for a second evening. These events were complimentary. So too was the time Padraig Harrington was invited to speak at the club. 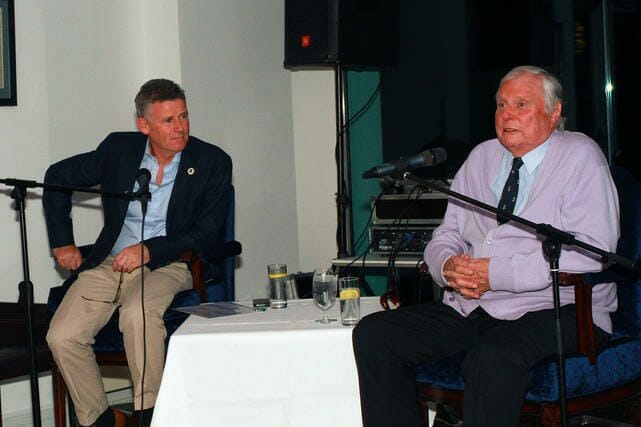 Image thanks to Cork Golf News

Then there are poker nights, live bands, summer barbecues, wine tastings, etc. The fairways and greens may be the key focus for every member but there is plenty of room on the periphery to make membership a more full-bodied and sociable experience.
Golf clubs should look at embracing families more. Think about it: family life is one of the biggest reasons golfers give up the game when children are young. Membership and playing golf are therefore hard to justify, but if a club makes itself family friendly (through Kids menus, activities and a (monitored) play area), then you might keep your members – and spouses – that much happier. Yes, easier said than done and not all members are themselves ‘child friendly’, but it’s worth considering depending on your membership age profile. Castleknock and Charlesland have an interesting approach with their flexible memberships – see below – where the annual sub becomes a credit which can be used across all facilities… which means it can be used to bring the family to eat.

I have heard several clubs talk about their clubhouses as ‘destinations’ which will attract not only members but also non-golfing locals. All I ask is that the food is worth the journey. I have eaten fabulous food in clubhouses… but I’ve had some shockers, too. Don’t over-promise because it will backfire in a big way.

If you want to keep members happy, don’t run with stroke events weekend after weekend. Mix it up with fourballs, scrambles, V par, even ‘beat the Pro’. Variety is important – look at how much praise the Pros heaped on the World Cup of Golf in Australia, where the tournament was played in a team format.
And now for a radical one: if a club asks a member to pay a €5,000 joining fee, have in place a system which will repay half of that sum after 10 years of membership/loyalty. It’s an idea, that is all.

Finally, members leave golf clubs. It happens. The job for everyone concerned is to understand why. Clubs must conduct an exit interview and find out exactly why. It could help clubs stop more golfers leaving… while also helping them to change something that could attract new members. Assuming it’s not because a golfer has problems with the club itself, give them a fourball voucher and invite them to come back and play with some friends. That fourball voucher doesn’t cost you anything and if they bring friends you might attract a new member from that group. Or leave it a year and then invite them back to see what they’ve been missing. Such things are discretionary of course but generating goodwill among existing members – even those leaving – is important in the loyalty stakes.