The Clare man who ‘fathered’ Professional Golf in America 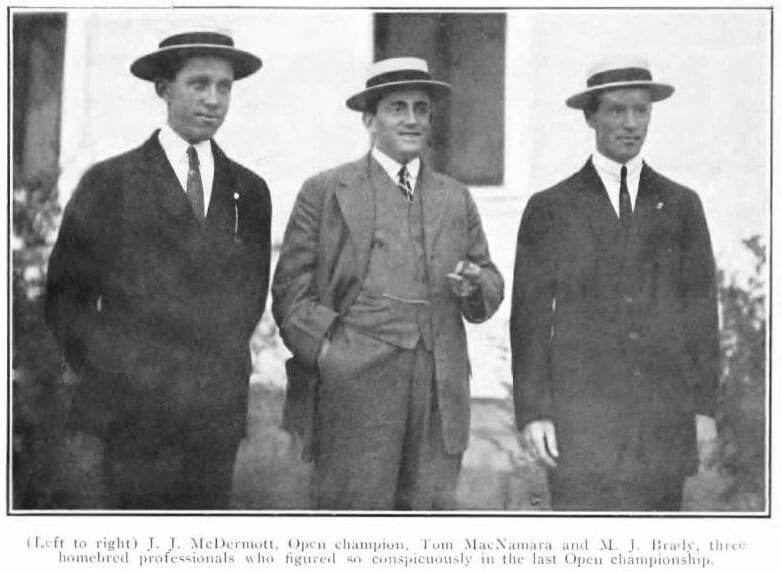 Tom McNamara (1882-1939) was a seminal figure in early US golf. Born in Boston, Tom had strong, family connections with a talented golfing clan from County Clare that began moving across the Atlantic piecemeal in the late-1880s.

After starting out as a caddie, Tom McNamara worked as a teaching professional in Boston until one day a stroke of luck landed him a plumb job as a salesman for Wanamaker’s, a New York department store that controlled the golf wholesale business in America, as well as having the most-in-demand, retail postal sales business.

Golf professionals all over America were opening shops a dime a dozen at the new Country Clubs that were springing up like mushrooms and it was to Wanamaker’s they turned for their supplies of handmade equipment, which was imported (prepaid) in large quantities from Scotland.

Wanamaker’s was also responsible for starting the PGA of America. In 1916, Tom McNamara was instructed to invite all of the leading golf professionals and leading amateurs to a meeting in New York to push the idea of creating an ‘association.’ It was felt that an organised structure would help to grow the game and create more customers for his employers.

The idea of a PGA Championship was mooted from the floor by (ironically) one of the amateurs in attendance and Wanamaker’s embraced the idea, undertaking to guarantee the prize fund. As one of the founding members of the PGA of America, McNamara travelled the length and breadth of the country playing in tournaments, promoting the PGA and the Wanamaker Company. He won the prestigious Philadelphia Open in 1914 and 1915 and the Metropolitan Open in 1912 – both equivalent to majors in their day. He also won the Western Open in 1915, second only in importance to the US Open.

What makes Tom McNamara’s golf career remarkable was his three runner-up finishes in the US Open and a third place finish behind the winner, Walter Hagen, in 1919. In 1909, McNamara was among the first golfers born in the USA to make a strong challenge in the US Open when he finished runner-up to Englishman, George Sargent at Englewood, shooting an almost unheard of 69 in the second round. Tom was also second to the amateur, Jerome Travers in 1915, which meant he took the winner’s cheque. There’s a question for a quiz in Ennistimon: When did a Clare man claim the winner’s prize in the US Open? Answer: 1915, Tom McNamara!

Wanamaker’s decision not to get involved in manufacturing was the reason why they gradually lost their controlling grip on the golf business in the USA. In 1924, Tom McNamara made yet another shrewd career move when he joined the Wilson Sporting Goods Company to manage their burgeoning golf business, and what an outstanding success he made of that too!