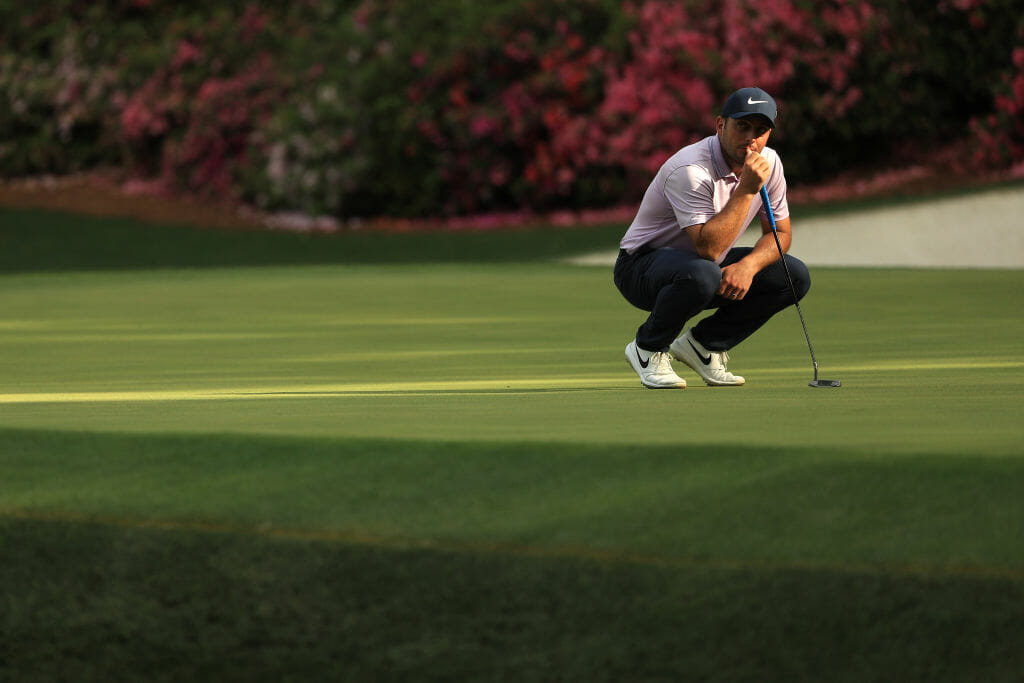 Francesco Molinari had an unbelievable third day and leads the Masters by two shots heading to the final day at Augusta, but the big story of moving day was undoubtedly Tony Finau.

The 6’4”, 29-year old Finau, from Salt Lake City, almost equalled the low round in Masters history as he returned an 8-under par third round 64.

Finau almost melted the internet here last year when he dislocated his ankle on the 8th hole of the Par-3 content and he may well be doing so again on Sunday, but for altogether less painful reasons.

Finau’s 64, one of three 64’s on Saturday, got him into position but he will have to contend with the imposing figure of a certain Tiger Woods as well as the current Open Champion, and one half of the famous Ryder Cup MoliWood pairing, Francesco Molinari, in the final group.

For someone (Finau) who was motivated to take up the game after watching Tiger win the Masters in ’97, playing in the final group with him on Masters Sunday will be a real treat.

“Oh, man, it will be an unbelievable thing for me, and something that I’ve dreamed of for a long time.  As a kid, I always wanted to compete against him and have the opportunity to. You know, I’ve dreamed of playing in the final group with him in a major championship, and it will be quite a cool thing for me tomorrow in the final group of a Masters. It will be a dream come true for me.

“He’s playing against guys that he kind of bred.  We were watching him as teenagers through high school and watching him dominate, and I think all of us relish now having a chance to compete against him.”

On day three Woods was purring, and his 67 was his lowest round at the Masters since his final round in 2011. The Tiger roars were in evidence once again, particularly on the back nine and IGM can attest that there is a definite difference between a Tiger roar and any other roar!

Woods imposed himself on the par 5’s too (3-under for the day), which he hadn’t done on the previous two days and it showed in his overall score of 67 which sees him tied for second, just two shots behind Molinari, well placed to challenge for what would be his 15th Major title.

“I just did everything today.  I drove it well and hit my irons well.  I made some putts. I just let the round just kind of build.  I don’t need to go after every single flag.  Just put the ball in the correct spots so I can have gettable looks and gettable putts.  And I was able to do that and I tried to keep the ball below the hole as best as I possibly could,” said Woods.

As for Sunday, well even a final group tee time doesn’t mean a relaxing morning for Woods with the times moved up because of incoming weather systems; “Interesting threesomes tomorrow.  The reward for playing hard and doing all the things correctly is you get a nice little sleep-in come Sunday, but that’s not going to be the case.  We’ve got to get up early and get after it.”

For Molinari, being in the final group at Augusta will be a new experience but he won The Open Championship when he was paired with Woods at Carnoustie so he is used to the Tiger effect and will be hoping that last experience is a good omen for things to come.

It would be easy to forget how far Molinari has come in such a short space of time having famously caddied for his brother Edoardo here in 2006 when he played with the reigning Masters champion at the time, Tiger Woods, as the US Amateur Champion.

“I wish I had only to worry about him,” said Molinari on learning that he’d be playing alongside Woods. “But there’s a few more I think that are going to come out tomorrow and try to shoot a low one. We’ll see what the weather is going to do tomorrow.

“I played the back nine probably as good as I’ve ever played over here, so really pleased about that.  And then a good save on 18, so nice to keep another clean scorecard.

The statisticians among us will be eyeing the top of the leaderboard as each of the last 29 Masters Champions have come from inside the Top-5 heading to the final round, so you’re going to be thinking that the winner ‘should’ come from Molinari (-13), Finau (-11), Woods (-11), Koepka (-10), Simpson (-9) and Poulter (-9). But, with the weather due to come in don’t discount some of the chasing pack with Matt Kuchar, Justin Harding, Xander Schauffele, Louis Oosthuizen, Dustin Johnson and Adam Scott all sitting in T7 on 8-under.