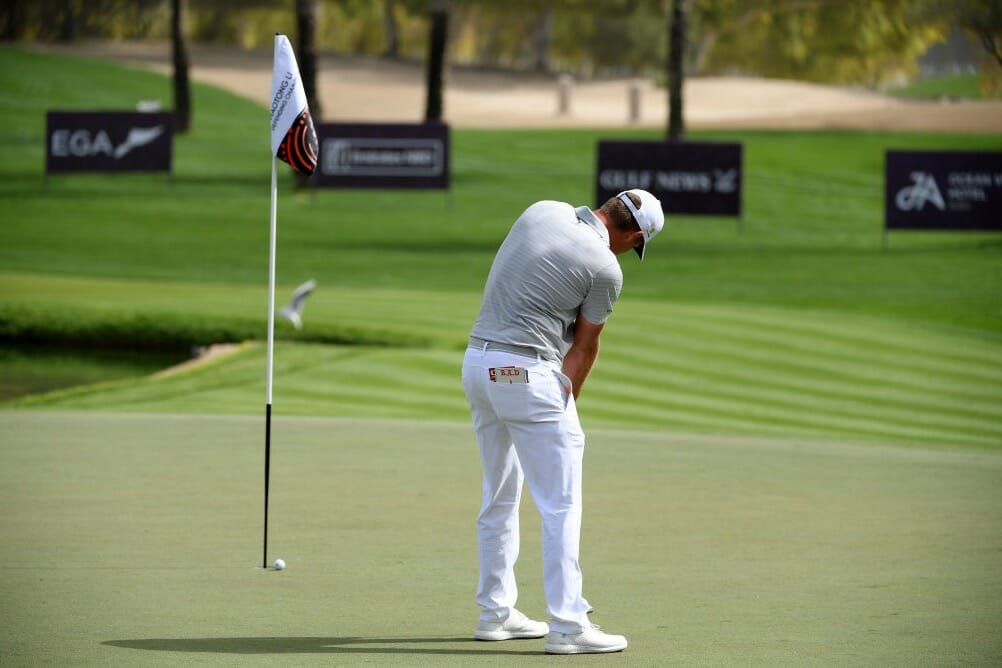 Bryson DeChambeau and Adam Scott have enthusiastically embraced the opportunity to keep the flagstick in the hole for their putts in the top Tour events.

They have done so to good effect, as DeChambeau showed when winning the Dubai Desert Classic while Scott looked impressive on the greens in finishing second to Justin Rose at the Farmers Insurance Open.

DeChambeau has done his homework and delivered his verdict: “Pin in, is an easy one. It’s statistically proven to be a benefit in 99 percent of situations,” he said recently.

“If I have an eight-footer to win a golf tournament, I mean no offense, I can’t really take myself seriously if I kept the pin in. If I have a putt I’m trying to make, that thing’s coming out.”

Former Ladies European Tour player Henni Zuel, now on commentary duty with Sky Sports, admits she has reservations about the new Rule that allows the pin to stay in the hole.

“I just can’t get used to it. It feels there’s just something wrong about it,” she said while watching Scott leaving the flagstick in the hole for a putt at the Farmers Insurance Open last Sunday night.

The big-name players all have their own views, but as January rolls out to a close, how are the majority of club golfers dealing with the “pin in/pin out issue? It’s early days, but for what it’s worth, I like this option.

First, leaving the flagstick in the hole saves time in terms of people marching up and attending the flag for a fellow player and then returning to their own putts.

Second, there’s something visually helpful about it as a target on long putts.

Third, from relatively shorter putts, around 10-15 feet, it can help focus and pace.

I haven’t quite decided whether to leave the flagstick in for every putt, short or long. Some of that is due to other players wanting the pin out while they putt and it’s not important enough for me to ask them to replace it while I go for the spectacular double-bogey!

However I do believe that as golfers get used to the new flagstick Rule, more and more will opt to leave it in – and that includes professionals. If the “leave it in” adherents such as DeChambeau and Scott improve their putting stats, they could change the opinions of die-hard traditionalists among the professional ranks, not least because a growing body of evidence suggests that there are benefits to keeping that flagstick in the hole.

Close to home, Fintan Brennan, the esteemed Course Superintendent at The Links Portmarnock, conducted his own experiment. Fintan, a competitive three-handicap golfer and Chairman of the Irish Links Initiative, rolled 100 balls down the Greenstester– an R&A approved device for assessing the reliability and performance of greens which was devised by he and his brother Ray.

The Greenstester delivers a rolling ball onto the green from a constant angle, through a specially curved plane, which ensures no ball bounce. The ball is released by a special mechanical device, thus requiring no human intervention and constant delivery speeds.For Brennan’s experiment, the device was set up six feet from a hole and the green speed was running at 9.5.

“I left the flag in. Delivered 100 golf balls; ten of them missed the hole completely just because of a bad delivery or a bad bounce when it got on to the green; 90 of them went in, having either hit the flag or caught the edge of the hole,” he said.

“After that test I’d say for anything outside eight feet or thereabouts, I’d leave the pin in. For me, anything inside eight feet, if the wind is blowing the fact that the flagstick is kind of moving would be the main reason for not leaving it in.

“If you run it up to two feet, I’d just knock it in with the flagstick in,” said Brennan.

The Links Portmarnock Superintendent also referred me to a survey carried out by the website MyGolfSpy.com. You can check it out for yourself, but the bottom line from their survey was:

“Don’t let the tradition of pulling the flag out while you putt get in the way of shooting lower scores.”