50 years of memories – Whelan and the Links

This is the strange story of a small group of men who went golfing in 1966 and who didn’t come home for forty-five years. Well. Not quite true.  They came home for fresh socks and jocks, to check the post, to make sure that their families were comfortable and to change their spikes before heading back to the links.
Because they were all golf addicts and they were the men who unwittingly founded by far the most significant and stylish golf society Ireland has ever seen, when they resolved to meet for more good days of golf they styled their grouping The Links.

They got started by accident between October and December 1966, which is why this story is being written now to mark their fiftieth anniversary, when Christy O’Connor Snr, Noel Fogarty, Jimmy Kinsella, Walter Sullivan, Paddy Finnegan and Cecil Whelan went for a game at Baltray.
They had a great day and so the talk in Baltray’s most comfortable and welcoming 19th, where the pints have always been superb and the steaks just out of this world, got around to the possible formation of a society to promote a series of Winter golf events for professionals and low handicap amateurs and they felt that they might raise a few bob for charity along the way.
Little did they know that they were about to go delightfully crazy and promote events which attracted many of the greatest players and greatest show business personalities of the 20th Century while raising zillions for charitable causes.
Their fund-raising final tally when they closed for business in 2011 was an astounding €12 million!!!! Unthinkable.  Even unimaginable. 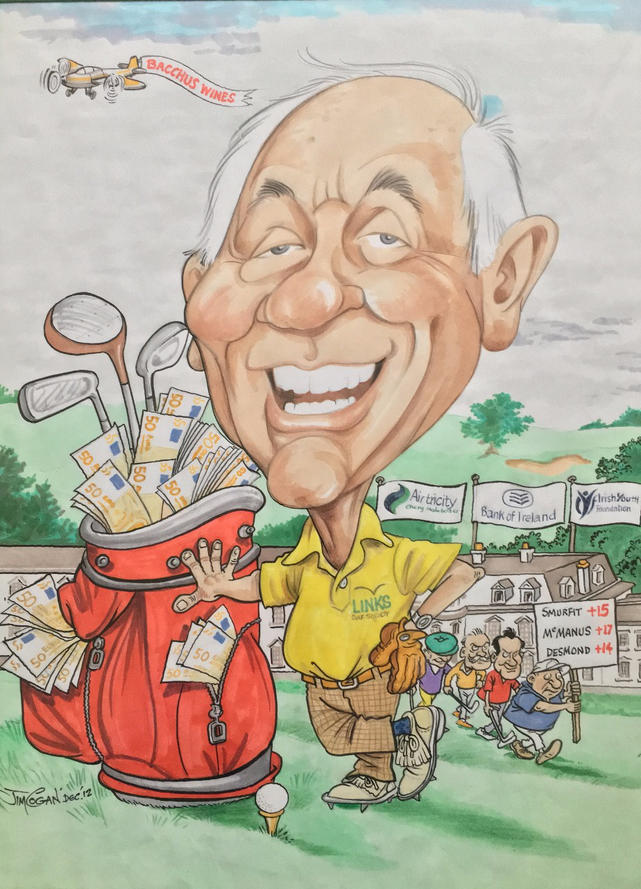 The men at Baltray in 1966 didn’t have any idea of what was to follow.  They just enjoyed playing a great links in great company and resolved to invite others to join in the fun.  They had thirty players in their first outing and it took off fast as there were eighty at the next meeting which generated IR£25 for charity and by year’s end they had given Cappagh Hospital  IR£300 which equated to about 20% the value of a house in Dublin back then!

Another way of putting that donation in perspective is by looking at the prize-money won by Christy O’Connor Snr:  five tournament wins boosted his haul to IR£4,500 in 1966; two wins and a second saw him bank IR£3,500 in 1967; and three wins and two thirds made his bank manager really happy in 1968 as he earned just over IR€7,000!

In over thirty years of stellar golf, twice No. 1 in Europe where he was twenty-three times a winner besides winning over sixty other events, only once did he win over IR£10,000 in a single season. That was 1970 when he won the world’s biggest ever first prize of Stg£25,000 in the John Player Classic at Notts Golf Club.

The excitement around the great deeds of this great man did much to enthuse his followers and when Jimmy Kinsella started to win regularly in Ireland and added the Madrid Open of 1972 everyone cherished an invitation to an outing of The Links which persisted on playing all their golf on links and for several years Baltray and Dollymount were the venues of choice.

As the years went by it just grew and grew. This was due in no small part to the inspirational leadership of Cecil Whelan who devoted untold hours to the development of ever bigger and better events and ever grander social events.  He was the ultimate golf impresario.
Once the links began to organise events, such as the Val Doonican Pro-Ams, as distinct from private outings for close pals, Whelan hit a new gear and started to travel to events like the British Open and the PGA Championship canvassing stars to come and play in Ireland.  No one was safe from his gently persuasive approaches and Christy Snr. did everything he could, possibly to the detriment of his concentration on play in major events, to help with introductions.

Everyone enjoyed Cecil’s style and, recognising his love of the game and of people, those stars who could not come quite often sent donations towards the cause.  His indomitable spirit was infectious and he generated many’s the laugh and became a legend as a good fellow, such as the time that the catering tent blew down in a storm at the British Open and Cecil, who had developed a taste for them, dived under the canvas to salvage a small supply of custard pies!
But behind the banter and the suave approaches Whelan was an amazingly gifted organiser and the mind boggles at the miracles he achieved at those major events.  Persuading a player to come to Dublin on the final evening of the tournament, or the next morning if the player was detained for a presentation ceremony, was the easy part.

Once the agreement was in place he had to make travel arrangements for the players and their entourages, caddies and wives and maybe a manager or two, to get into and back out of Dublin; arrange for accommodations and ground transportation; provide gifts and help rearrange the players’ plans for the journeys which they had planned before being diverted to The Links!
All the time he smiled.  He glided calmly from one person to the next and from one question to the next.  At the golf course.  At the venue for the big dinner.  At the airport. Nothing ever seemed to bother him and never was a bad word spoken.

At home, The Links was an institution by 1970.  All the leading Irish amateurs and professionals from that time until the winding-up of The Links in 2011 played when invited and worried a little if the invitation did not come.  Bankers and businessmen wanted to be associated with The Links and were generous sponsors and bidders at charity auctions.
International stars loved to come to Ireland and play for The Links and none bigger than Bing Crosby who played at Hermitage. Bing, an avid golfer, remained a fan until he died on a golf course in 1977.

As the years went by The Links transmogrified into a being as much social, cultural and philanthropic as a golf movement.  Along the way it moved from a total focus on golf on the links in Winter to the inclusion of venues geared to hosting big social events and who were willing to help the cause.  So play moved to Mount Juliet, Carton House and most of all The K-Club where Dr. Michael Smurfit became a great admirer and supporter of Whelan and all his events along with businessmen like Dermot Desmond and JP McManus. 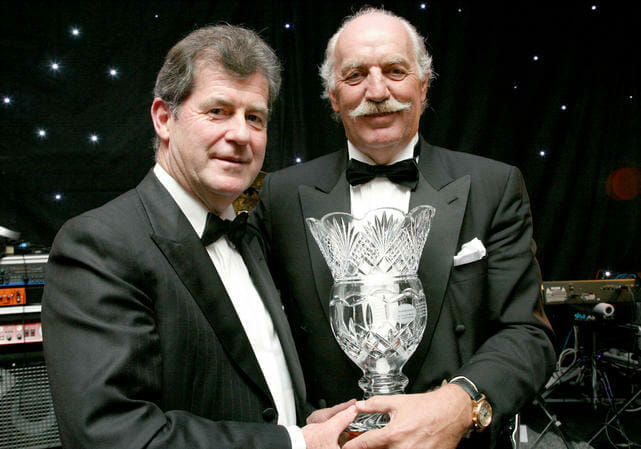 JP McManus & Dermot Desmond at the final Links outing in 2011

Whelan had proven himself to be true, fair, constant, considerate and a genius.  So it was that there wasn’t a dry eye in the house when he decided to disband The Links in 2011, in its full glory and running strong. In his parting speech that night at the K Club Cecil said,

“I have been very pleased to hold the position of Secretary of the Links Golf Society for the past 45 years. In this position I have been fortunate enough to meet and work with some of the most successful people in sport, business and entertainment. What impressed me most was the immediate positive response that each and every one gave when asked for their help.”
“For some it was financial support and others it was their company’s resources but everybody gave us that most precious gift, their time. To everyone who played their part in allowing the links to become what it did, may I say – Thank You. We have all been part of something special.”
Even at the end his judgement was impeccable … he knew when to hold’em and he knew when to fold’em.