by Bernie McGuire, Albany, The Bahamas
The appearance of a carton of beer in the fridge of the Hero World Challenge media centre reminded me of Rickie Fowler.

American Kevin Kisner celebrated just a second PGA Tour ace in his career in holing out, using a 6-iron at the par-3 12th hole on day three of the Hero World Challenge.

There was no brand new Hero motorbike nor the keys to a luxury Albany apartment but just the honour on the next tee, on route to Kisner posting a 77 and slumping to a share of 19th place in the $US3m event.

No sooner had Kisner completed his round and a case of Sands Light beer appeared in the media centre fridge and with a note to say it was with the compliments of Kisner. 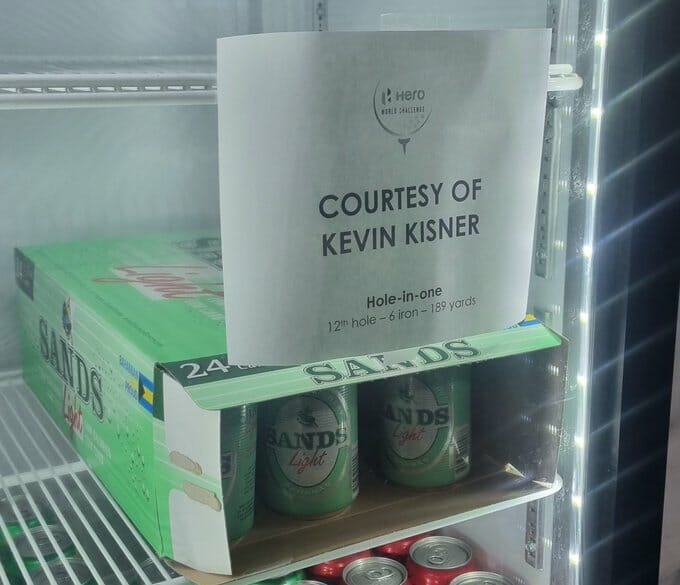 Strangely, there was a similar scenario on day two of this week’s co-sanctioned South African Open when Irish tour rookie Tom McKibbin aced the 11th hole on the Blair Atholl course in Joburg.  There was not a spectator to be seen (looking at TV coverage) of McKibbin’s maiden Tour ace nor was there a gleaming new car on show or a pot of cash, not even a bottle of bubbly.

Nonetheless, McKibbin arranged for a couple of cases of beer to be delivered to the media centre, no doubt, much to the delight of the media as were the beers that Kisner arranged to be delivered here today at the Hero World Challenge.

It’s not the first time players such as McKibbin and Kisner go to such measures as there’s a long history of celebrating a tournament ace with the media.

Though the best was Fowler as his management team, each time Ricky won a tournament, would arrange for a case of champagne to be delivered to the media centre.  This was the scenario for both his DP World Tour wins – 2015 Scottish Open and the following year’s early 2016 triumph in capturing the HSBC Abu Dhabi Championship.

“I guess it’s almost become a little bit of a tradition now,” said Fowler of the bubbly. “Got to celebrate a win. No better place to start than with all you guys.”

Check out the photograph above and you can see this writer right in the front row raising a glass of bubbly in Rickie’s honour.

And while Rickie’s had five PGA Tour wins it’s been a long time between champagne toasts since his last victory at the 2019 WM Phoenix Open.