Mark Heinemann may have grown up playing golf in his native Wrekin Golf Club in Telford in England but the Shropshire native has established himself as one of the premier PGA Professional’s in the southwest of Ireland.

Heinemann came to Killarney Golf and Fishing Club in January 2002 and twenty years later he has become a golfing legend in the town.

A jack of all trades, Heinemann has become an elite golf coach while he is also a master craftsman when it comes to repairing clubs proving the old methods still have a place in the modern game.

The Head Professional began his golfing career as an assistant pro in Shropshire Golf Club in 1992 before completing his PGA qualifications in 1999 alongside David Drysdale and a certain Ian Poulter. While searching for a job he came across an ad in the PGA magazine to work as assistant to Tony Coveney and he decided it would be just the ticket.

A brave leap for a youngster in November 2001 and little did he think he would still be there two decades later.

“I actually had an operation on my left foot so I arrived wearing a surgical boot and had to lend a size-12 shoe from a friend of mine,” explained Heinemann. “Tony wanted me to hit a few shots and safe to say I didn’t hit the ball my best but he called me back three weeks later to say we would start in January 2002.

“In one of my first ever rounds in Killarney with one of the senior members he said to me. ‘You need three things if you are going to live here: a set of golf clubs, a bicycle and a boat,’ so I have all three. If you have those three things in Killarney you are sorted.”

Heinemann served as head assistant to Tony for three years before moving to Skellig Bay GC – now known as Hogs Head in Waterville – in April 2006.

Coaching has always been Heinemann’s passion no matter what age or level of ability and he has been a full-time coach since 2012 when he launched his website GetGolfing.ie, before returning to Killarney Golf and Fishing Club in 2019.

The Englishman has dipped his toe into various coaching roles. He was the ILGU Area coach for the southwest from 2013 until 2018 and High-performance support coach for a number of years which took him abroad with some elite female amateur golfers.

Heinemann has also served as Boys coach to Co. Kerry and coaching juniors is one of his passions and he can often be seen coaching in local schools or running summer camps over the holidays.

“For me. it’s not just about hitting the ball there is physical, tactical, mental, technical, lifestyle aspects that everyone can improve. I have been back at Killarney doing teaching, custom fitting and club repairs.

“I launched my website Get Golfing.ie in 2012 to sever as a central point of contact and information source for my customers. This has evolved over the years to now incorporate online lessons, online bookings, online shop for training aids and video tips & drills.. I now also have Assistant Professional Pádraig Maher from Caherciveen working alongside me and he is already developing a reputation as a fine coach.

Back in 2013, in order to take his level of coaching to the next level Heinemann invested in a new golf swing studio in Killarney town. This is an indoor facility of 100 sq.m where he invested approximately €170,000. In addition to indoor and outdoor putting greens, he has installed state of the art technology including Flightscope launch monitor, SAM Putt Lab and Boditrak pressure mat He also has his own workshop for customising and repairing clubs. “This allows me to work into the depths of winter we can come in here in December wearing shorts and a t-shirt and get some good work done without the elements of outside” states Heinemann.

A change of Management in Killarney Golf & Fishing Club at the beginning of 2019 provided an opportunity for Heinemann to join the club he knows so well as Head Professional. Synergy Golf oversee the day-to-day running of the golf operation while Heinemann has been tasked with overseeing the development of the Golf Academy. This is located on what was formerly know as the Lackabane course.

Over the past 3 years substantial investment in the region of one million euro has helped restore Killarney Golf & Fishing Club to the top tier of Ireland’s parkland golf courses. Over €700,000 has been invested in a new fleet of John Deere machinery, with another €300,000 spent on clubhouse, front entrance and the pro shop.

“My ultimate aim for Killarney Golf Academy is to see it develop into the premium golf learning and practice facility in the country. We’ve come a long way towards that goal since 2019, now having premium quality 2-piece golf balls, top quality mats, 4 short game greens, indoor and outdoor bays along with a full custom fitting studio where we fit for Callaway, Cobra, Ping and Mizuno.

“There is no doubt about it, while we do wish the Covid pandemic never happened, it has been a benefit to the game of golf as we now see large number of newcomers taking up the sport and players returning to the game of golf. Our junior membership it at its highest ever level with over 170 boys and girls actively play golf at Killarney Golf & Fishing Club. In order to capitalise on this fresh interest we have put together a 5 year junior development plan with the aim of creating a pathway for children to get from the pre-membership stage all the way through to national panels.

“We want children to come through the ranks and represent the club on high performance panels in the future and get some support from the golf club,” he said with the optimism in his voice audible. 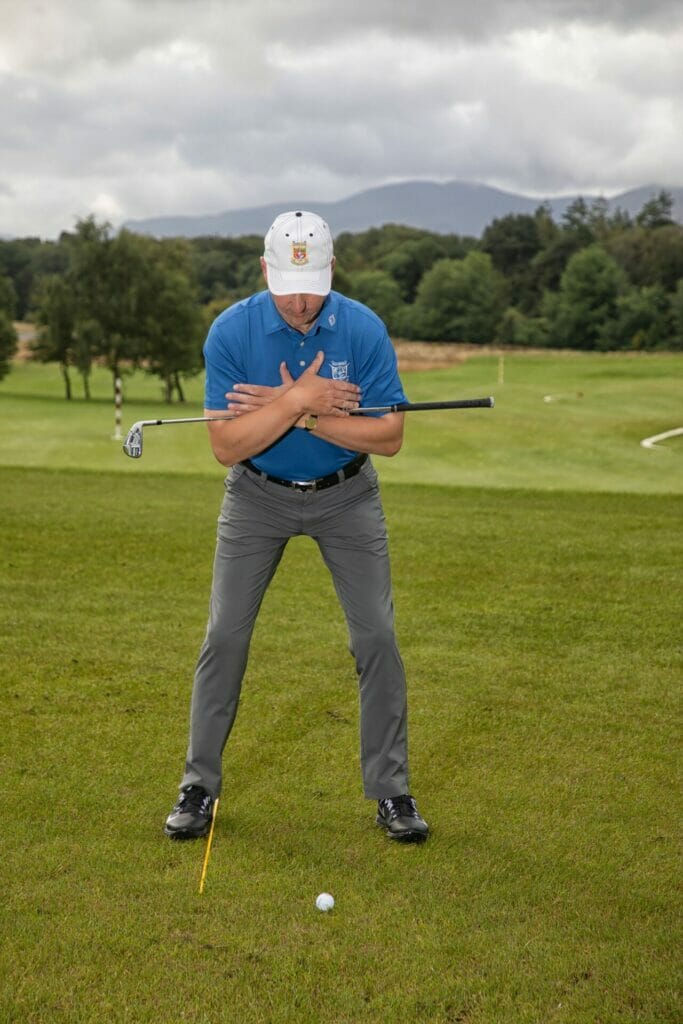 Heinemann now splits his time between the Swing Sudio and the Golf Academy in Killarney Golf and Fishing Club.

Whilst Killarney Golf & Fishing Club has been performing well on the Ladies and Girls fronts at National level in recent years, its 20 years since we had a male representative with Simon Gallivan  the last boys international to represent the  club back in 2002. This is  a drought which the 48-year-old intends to arrest after devising a five-year-plan for the development of juvenile golf in Killarney in tandem with the improvements made to the academy facilities.

“We are up against GAA here from three or four years of age. Soccer, rugby and basketball are also very popular in this part of the country too.. We are seeing a lot of children come through the door with the summer camps and school initiatives that we do.

“I started a five-year plan in 2019 and we are only getting going now after COVID which has created a pathway to get children from pre-membership stage all the way to national panels. We have cadet membership, novice, junior, advanced junior, elite junior.”

It would be unfair to call Heinemann old school, but he is certainly a throwback to yesteryear. Repairing golf clubs in the modern day has become a dying art, however the passion for the trade still burns brightly with him and he has spent many long evenings grinding away in his workshop mending all sorts of golf clubs from your Callaway Rogue’s, Ping i2s to hickory clubs.

“I do loft and lies, tips, grips, shafts. I can change the weight in clubs, lengthen and shorten them. Club repairs is a dying art. I was one of the last guys to pass through PGA training in 1995 where we were still working with wooden woods.

“People want to just replace their clubs rather than have them fixed. I think I am the only person for 50 or 60 miles that does repairs so I am quite busy with that. A client of mine recently brought in  some wooden PING eye2 woods and I tried to explain the benefits of moving to a modern model but he wasn’t having it.”

“The grips were shiny and rock hard and he was using black electrical tape to hold the club and shaft together so I replaced the grips and rewhipped them with whipping twine. I hadn’t done that for two or three years.

The Shropshire man doesn’t get much opportunity to play within the PGA Region given all of his commitments and projects but he does enjoy playing golf with his wife Jill and his twin girls Leah and Aoibhín.

Heinemann has enjoyed a good playing career to date, making eight Irish PGA Championship appearances where he rubbed shoulders with Pádraig Harrington, Shane Lowry and Peter Lawrie while he progressed to Final Qualifying for the Open Championship on three occasions without breaking the barrier.

He turns 50 in 2024 and already he has cast an eye towards the Legends Tour. One thing that can be said for Mark Heinemann is that he is always thinking ahead and rarely stands still!