The rewards, the doors that now open for the golfer wearing green shoe laces

Seamus Power is now relishing the many rewards and the many doors that will open to him in capturing a second PGA Tour victory with his one-shot success in brutal conditions at the Butterfield Bermuda Championship.

The 35-year-old Waterford golfer created a unique slice of PGA Tour history in joining Rory McIlroy as back-to-back Irish-born winners, a first in the history of the Tour.

Power’s win earned him a two-year Tour exemption to the end of 2025 but then it’s more like a three-year Tour exemption, winning as he did in October 2022 and in the sixth event of the 2022/23 wraparound schedule. This is very much in contrast to his maiden victory in July last year, a win that materialised towards the end of the 2021/22 season.

As well, his win lifts him to a career high of No. 32 on the world rankings and the assurance not only of a return invitation to next year’s Masters but the certainty of starts in the other three majors of 2023.

Then there’s the FedEx Cup money-list, with Power bumping McIlroy out of fifth place on the money-list though that may be temporary as he joked soon after winning.”Irish golf is in a great place at the moment with Shane (Lowry) winning at Wentworth, Padraig (Harrington) winning all over the place and with Rory (McIlroy), of course, winning last week and while I’m ahead of Rory on the money-list, I think it will be a losing battle,” he said (smiling).

“It’s great for Irish golf. We have Leona Maguire on the LPGA as well. It’s a good time for Irish golf and hopefully, you know, you’re always hoping it’ll kind of inspire some more junior golf in Ireland.” 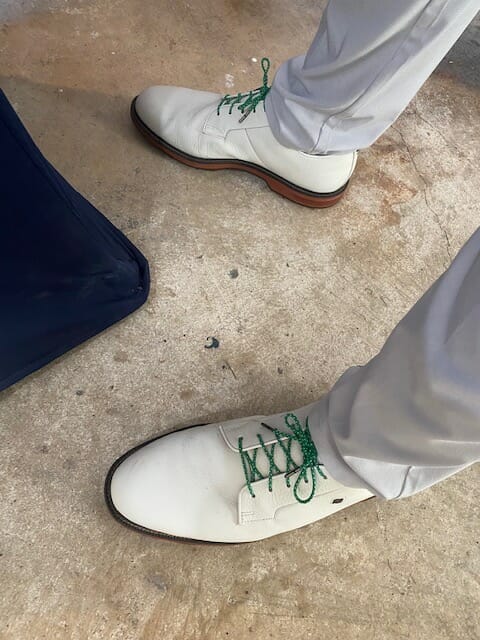 “All of a sudden like you’re looking at changing your schedule and you’re going to add Maui and tournaments like that, and even knowing that you’re going to be in the Playoffs and all this kind of stuff,” he said.

“It makes things a lot simpler, that’s for sure. You’re not looking — not as if you’re doing it all the time, but you’re sometimes looking over your shoulder a little bit, especially because I was up maybe in the 30s and just hadn’t played great since like the middle of the summer. So, as you said, just slipping down, down.

“And you know the cut-off for the top-50 is coming up soon, there’s not much golf left in the year, so it’s nice to get away from that, for sure. It’ll definitely clear your thoughts, clear your mind going forward.

“It’s just really nice. It’s kind of a funny thing. I didn’t really pay attention to world rankings until I got into the top 50 in the world and now it has become very, very relevant.

“I was close to the match play and then obviously the cut-off for some of the majors start approaching. So, it’s nice to be able to kind of get a bump away from that 50. It’s nice. It opens so many doors.”

There’s also an event taking place late September next year in Rome that is beginning to excite the Irishman and particularly after chatting with European Ryder Cup captain, Luke Donald last week in their Bermuda Hotel.

“I spoke briefly on Wednesday night with Luke at that party in the hotel, so we chatted about the Ryder Cup briefly,” said Power. There’s a new event, the Hero Cup in January in Abu Dhabi. He was just telling me some of the details about it, GB&I vs. Europe team event and just some of the options I might have.

“As I said to him, like my — before this week, like how I played in that was going to affect some of my schedule, so obviously this helps a lot, gives me more flexibility going forward.

“So, it’s something I’m going to talk to him about again now that I have a little bit more freedom to play where I want. It’s going to be — yeah, I’m going to talk to him and see what he recommends. You might as well see — you know, if it doesn’t match up, it doesn’t match up, but I certainly want to ask his opinion and I don’t want to come next September and finding out if I would have done this, I would have been on it.

“So, it’s something, this certainly , but I’m going to talk to Luke and see what happens.”