Gary Hurley secured a Challenge Tour card for next season while Jonathan Yates ended his Alps Tour campaign on a high with victory at the season ending Grand Final in Modena.

Yates shot a three-under 69 to win by two strokes on fourteen under par to take the €10,000 first prize.

Yates had established a three shot advantage heading into the final day and he was rarely threatened although local challenger Stefano Mazzoli briefly closed the gap to the minimum after six holes.

Naas man Yates was always in control and three birdies in four holes before the turn saw him close out his front nine in 33 and take control again.

It was a calm and assured performance which he described as his best round of the week as he showed great mentality to hold off Mazzoli early on.

“Today was my best of the week, he said. “My game was very, very solid. Stefano started really quickly and put it up to me early on with some birdies, but I’m very happy with how I responded well to him. It was a great day and a great week.”

Yates will head to next months Stage Two of DP World Tour Q School in fine fettle and he feels the standard of the Alps Tour is getting better every year which he hopes will help his game over the winter before he re-evaluates his 2023 options.

“There is no better third tour than the Alps Tour. It’s a fantastic Tour the tournaments and the golf courses are fantastic,” he explained. “The level of golf is phenomenal, I’m going to the second stage of Q-School next then I will re-evaluate my schedule after this week’s result.” 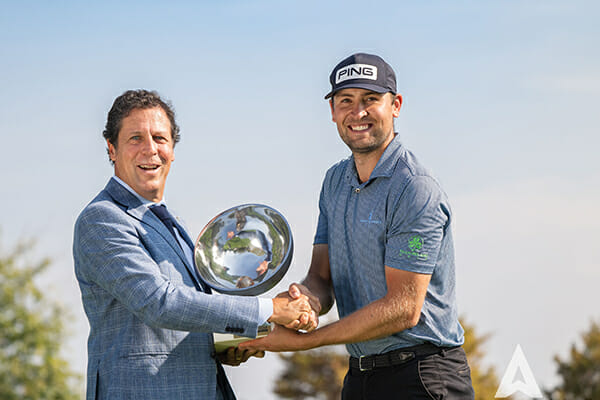 He added another birdie on 13 and a dropped shot on 14 didn’t rattle him and four steady pars sealed the deal as the chasers ran out of holes.

A battling level par 72 was enough for Hurley to make the leap to the Challenge Tour next season as he claimed the fifth and final promotion spot on the Alps Order of Merit with a share of 8th place.

A closing bogey wasn’t fatal but it was back nines of 31 and 32 over the first 36 that kept him alive.

The West Waterford native started slowly today again dropping a shot on the third but he responded instantly with a brace of birdies.

A bogey on 8 saw him turn in 36. The 29-year-old started the back nine rapidly with back to back birdies before a nervy finish saw him give them back on 14 and 18 but it mattered little in the end as he finished on seven under.

Meanwhile away from the drama, James Sugrue shot his third successive 74 to finish on plus six.