East Cork Golf Club made history by claiming the club’s first ever All-Ireland title as they held off a spirited Coollattin comeback at PGA National Slieve Russell.

Both captains named unchanged lineups from those that beat Clontarf and Killymoon respectively in the semi-finals and they treated the large galleries in attendance to some scintillating play in glorious sunshine in Cavan.

East Cork came flying out of the blocks, taking early leads in three of the five matches, aided by Shane Connor who holed-out from the trees for eagle on the opening hole, but Wicklow’s Coollattin were intent not to let the Munster men have their own way and took control of the final two matches on course.

In the third match, despite losing the first hole to an eagle, Coollattin’s pairing of Cormac Redmond and Paddy Myers fought back and took the lead after eight holes before the pendulum swung in East Cork’s favour again after the turn and Connor and Scott Coyle Garde went 3up after 13.

Any early celebration plans were scuppered, however, as Egan and Nolan’s revival gathered momentum and the Wicklow men won 15, 16 and 17 to leave the match all-square playing the final hole.

A superb par on the 17th for Connor and Garde moved East Cork one win away from victory, but with the second pairings tied on the 18th, the fourth tied on the 16th and Coollattin leading in the final match, the tie was balanced on a knife-edge.

O’Brien and Harrigan held their nerve on the final-hole, with the former holing a slippery four-footer to spark wild scenes of celebration from the large and colourful East Cork following who’d made the long trip to Ulster. 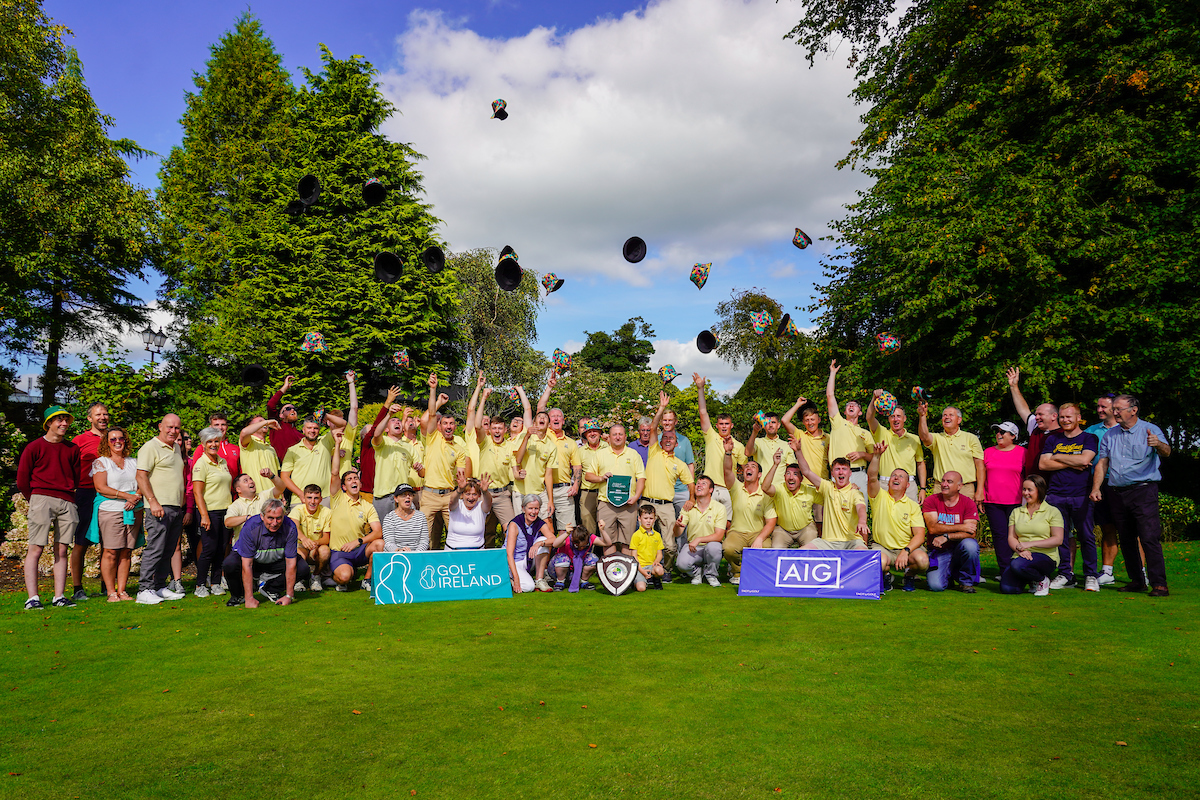 Afterwards, an ecstatic East Cork captain Danny Meade paid tribute to the challenge that had been laid down by Coollattin. “I was very, very nervous out there. Even though we got an early lead, they gave a fantastic account of themselves and fought to the bitter end. We can take nothing away from them, they were brilliant.”

We’ve never had a green pennant [awarded to All-Ireland Series champions], we were in an All-Ireland Final, what, 29-years-ago and came up short and for a while there I thought we were coming up short again, but the lads have all been brilliant and they never let us down. I’ve said since April, it’s not about individuals but players, selectors, everybody was all in this together.”

Harrigan and O’Brien were quick to pay tribute to the hundred-strong following from the Rebel County. “They mean the world to us’” said O’Brien, “many of them are squad players, family members, general supporters, and they all made the four-hour drive up here yesterday and many more today. They stayed in hotels, shared beds, slept in cars, everything to be here today. And they really helped us over the line.”

Harrigan, who lagged his long uphill-putt to four feet, which O’Brien then holed, had rushed to embrace his partner, unaware of the chaotic scenes behind as the East Cork faithful charged towards the green. “I had no idea what was going on behind, I was just fixated on the putt and when I saw it was going in, I made a beeline straight to him [O’Brien].”

Asked about the celebratory plans, Meade wasn’t shy, quipping: “We’ve behaved ourselves all week, but we’ll not be behaving ourselves tonight. We’re going back to Cork and we’re going mad. Midleton won’t know what hit it.”

Meanwhile, a holed-chip from Malone Golf Club’s Louise Coffey settled their tie on the second extra hole against Roscommon Golf Club to set up an all-Belfast affair in the AIG Women’s Senior Foursomes Final after Belvoir Park overcame Elm Park on the other side of the draw.

It was particularly cruel finish for Roscommon who had completed a Connacht Senior Cup and Senior Foursomes double, only to be eliminated in both All-Ireland Semi-Finals in additional holes.

Previously, in the quarter-finals, Roscommon’s Blaithin O’Brien and Anna Higgins triumphed on the 19th against Royal Tara, whilst Sara O’Sullivan held her nerve to sink a slippery three-footer on the last to edge Malone past Mallow Golf Club. Belvoir Park came from behind to pip Ballybunnion in a thrilling contest, while Elm Park were convincing winners over Kilkenny Golf Club.

There will be no double for Belvoir Park however, as Greystones ended their hopes of a Senior Foursomes and Challenge Cup double and it will be an all-Leinster affair between the Wicklow club and Meath’s Headfort Golf Club, who outlasted Tipperary Golf Club in a match that went right to the wire.
The AIG Senior Foursomes final will tee off at 7:45 am and the AIG Challenge Cup final is scheduled for 8:15.