Stuart Grehan picked up his first tour win after he was the last man standing following a seven-hole playoff at the Spey Valley Championship on the EuroPro Tour.

It’s a win that has come at an opportune time for the Tullamore man having turned down Challenge Tour invites including the Irish Challenge at the K Club to prioritise winning on the EuroPro Tour and putting together a promotion push to the Challenge Tour.

This win lifts him into the top-10 on the EuroPro Tour Order of Merit and he is primed to launch an assault on the top-five which would earn him a full Challenge Tour card.

“Turning down that invite to focus on EuroPro has paid off. I’m into the top-10 and have a huge opportunity to get into the top five and the way I am playing you never know I might try get another win under the belt. I’ll keep doing my own thing and see how I get on.

“Challenge Tour is the goal, obviously the top five. Really wanted to focus on that, I’m in a great position now, three events left, playing nicely and one of those events is in Ireland (Tour Championship at Lough Erne) and we will see how things go.”

A crazy tournament had a crazy ending with both Grehan and McElroy – who all but secured promotion to the Challenge Tour – battling it out for seven extra holes while Scotland’s Michael Stewart was eliminated after the third playoff hole.

A birdie on the seventh extra hole – the 1st – saw him edge McElroy to the title which sees him rise to 9th in the Order of Merit and firmly in the race to make the top-5 at the end of the season.

“Dermot hit a lovely drive, he played great golf. I hit a really nice tee shot, 40 yards to the pin hit a nice nippy 56 to three-feet. Dermot missed from 20-feet or so and I was able to get my putt to drop, it was a great feeling!

“I’m delighted, absolutely delighted. I won a few things in Portugal and stuff like that but this is the first win on the EuroPro Tour so it’s great.

“I played well all day and all week. I only had two bogeys and was bogey-free for the last 32 holes of the main tournament and then palyed well in the playoff. The game has been trending that way and nice to get into the playoff and get over the line.

“It was a tough few days with the rain delay and the weather. Myself and Dermot had a five-hour wait and to go and play good golf in a playoff I’m very happy with myself. It could have been over a little earlier if I could hole a putt or two but delighted to get the win in the end.” 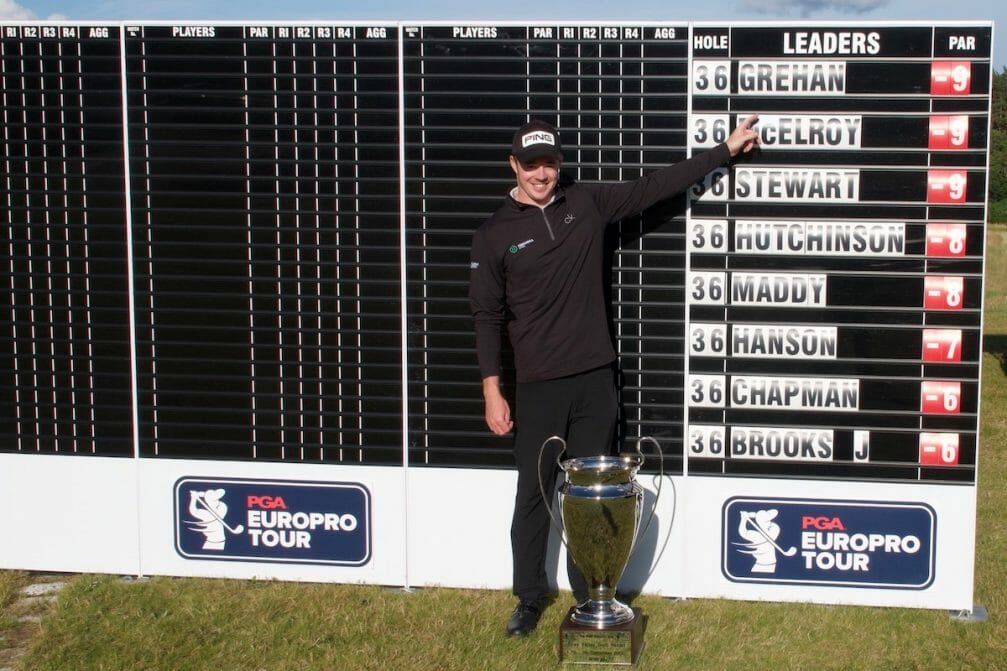 The trio were tied at the top on nine-under after McElroy shot a bogey-free round of seven-under 64 and Grehan a blemish-free 66 to join the Ballymena native and Stewart on nine-under.

A crucial eagle on the par-5 17th catapulted Grehan man into a share of the lead and after passing up an opportunity to win on the 18th he got a second bite of the cherry and took full advantage.

The second round of play was suspended overnight due to inclement weather and with the tournament reduced to 36 holes Grehan returned to complete the last six holes of his round.

Five pars and an eagle were enough to force his way into the playoff alongside McElroy and Stewart but it was Grehan who was left smiling at the end of a long week.

With just three events to go on the satellite tour Grehan is hitting form at just the right time with finishes of 12th and 5th preceding his win.

With the tournament reduced to 36 holes there was no cut with the top-50 and ties earning prize money at day’s end.

Dundalk’s Daniel Mulligan shot a level-par 71 to remain on two-under and a share of 22nd place.

Ronan Mullarney and John Ross Galbraith finished in a share of 60th on two-over while Tramore’s Robin Dawson slipped down to three-over after a 76.

McCarroll and Brennan were tied on +7 while amateur starlet Keeling and Donnelly were a shot further back and Clarke was ten-over.