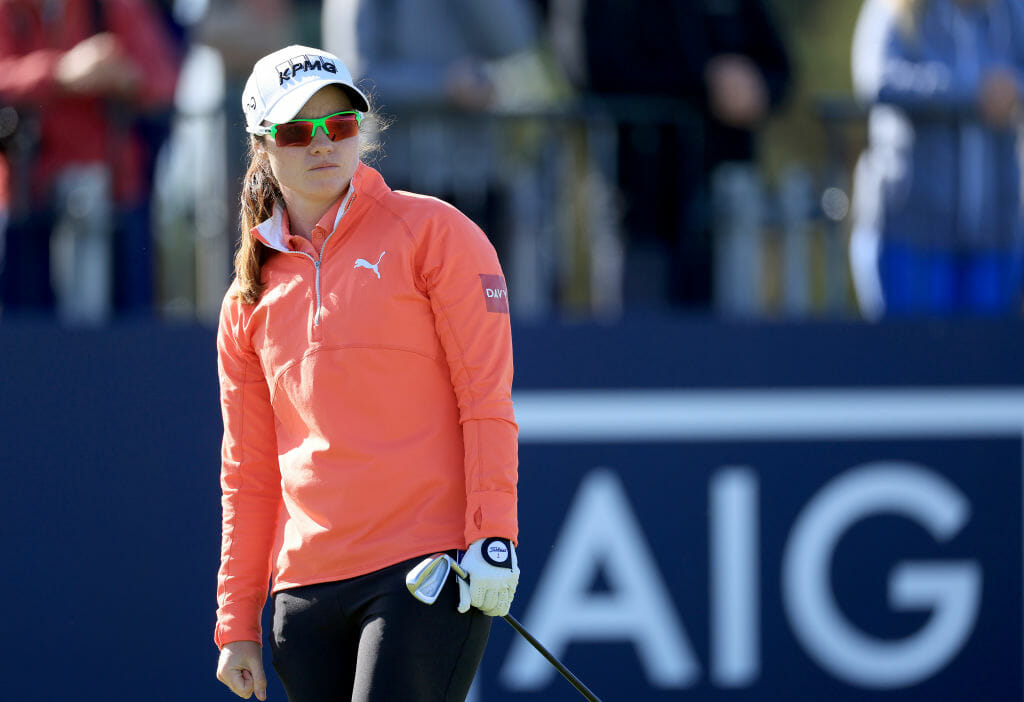 Leona Maguire plays her tee shot on the 16th hole during the first round of the AIG Women's Open at Muirfield on August 04, 2022 in Gullane, Scotland. (Photo by David Cannon/Getty Images)

Leona Maguire produced one of the shots of the day on her opening hole at the AIG Women’s Open Championship at Muirfield but she was unable to fully capitalise on a self-described “solid” first round.

The Cavan woman started with a bang as she bounced a 3-wood up to tap-in birdie range on her opening hole, and she added two more birdies – along with one bogey – to sit two-under-par after 10 holes.

But a rough back nine meant she would card two more bogeys and end the day where she started, a level-par 71 leaving her six shots off early leader Hinako Shibuno.

The Japanese fired eight birdies and two bogeys in a six-under 65 that has her one shot clear of America’s Jessica Korda, with recently-turned-pro Louise Duncan sitting alongside Mexico’s Gaby Lopez for third at four-under-par.

Maguire will be disappointed she couldn’t at least finish under-par after the early promise her round showed, that birdie at the first followed by two more at the par-five fifth and par-four 10th which, along with that dropped shot at the par-three third, had her motoring in the right direction.

But the birdies dried up on the back nine, the par-fours 12 and 15 tripping her up and seeing her end the day with a 71 that has her playing catch-up early.

“I played pretty steady. Hit a lot of greens and a lot of fairways, so it wasn’t easy, could have squeezed another few shots. It was those two three-putts were a little disappointing but other than that it was a pretty solid round I think to start,” said Maguire.

“I think I stayed pretty patient, committed to my targets and didn’t try and force it too much and that’s really all you can do in those winds. It’s a lot of crosswinds and you have to commit to your targets. I feel like I did that.”

Meanwhile, 2019 Open champion Shibuno is off to a rapid start, the 23-year-old birdieing four of her first five holes and two of her last three in a 65 that has her one shot clear after the first day’s play at Muirfield.

Stephanie Meadow is battling to make the cut, though, as five bogeys led to a birdieless four-over 76 that has her tied for 103rd and three shots off the mark to make the weekend.

The Galgorm touring pro picked up a bogey on her opening hole, dropped two more back-to-back at the eighth and ninth to turn in 39 and couldn’t rectify things on her back nine, two more birdies coming at the 12th and 18th.