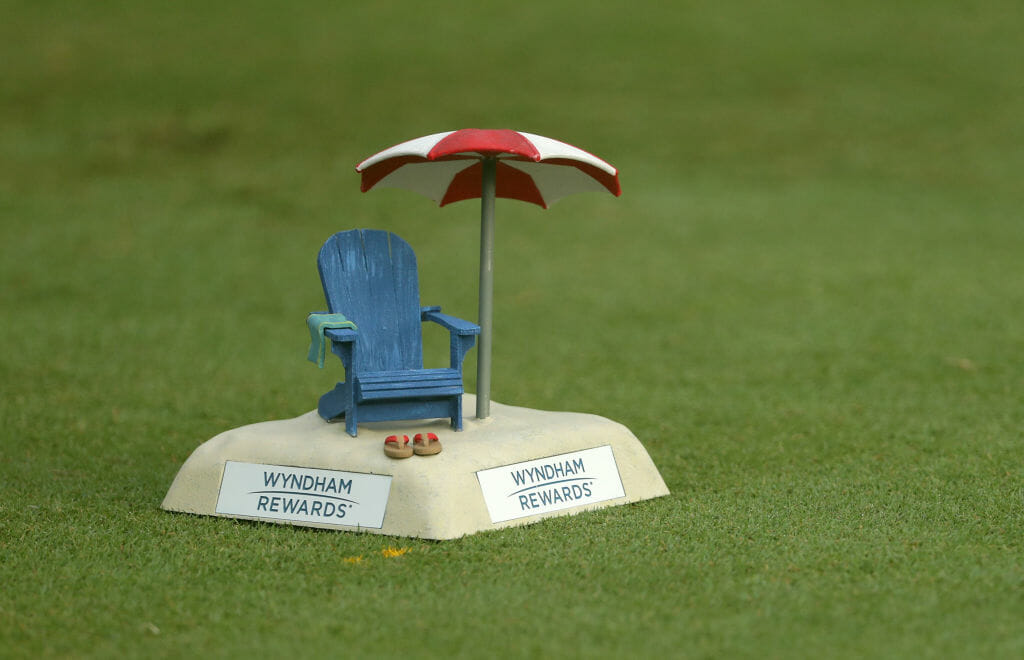 A general view of a tee marker during the second round of the Wyndham Championship at Sedgefield Country Club on August 18, 2017 in Greensboro, North Carolina. (Photo by Streeter Lecka/Getty Images)

Shane Lowry can really play it cool this week entering the bar of the PGA Tour’s ‘Last Chance Saloon’ at the Wyndham Championship in South Carolina.

The Wyndham Championship is once again the final event of the ‘regular’ 2021/22 PGA Tour season and it’s being staged for a 14th straight year at the Sedgefield Country Club course in suburban Greensboro, North Carolina.

The event is famous for its margaritas and the sounds of Jimmy Buffett throughout the spectator village and with fans of Buffett knowing it was in 1977 he released his hit song ‘Margaritaville’ featuring that remarkable opening line ‘Nibbling on a sponge cake, watching the sun bake’.

We had one of those really hot and humid ‘sun bake’ days when I was last at the event in 2017 but then how good was it to be sipping on an ice-cool margarita ahead of reporting on, and should I dare mention his name, Henrik Stenson winning with a then record-setting 258 four-round tally. Remarkably, Stenson’s prior Wyndham results had been – MC, MC & WD. He was also in great quintessential Stenson form at his post victory press conference with your author grabbing a photo of Henrik cheekily ‘peeking’ through a handle of the trophy. 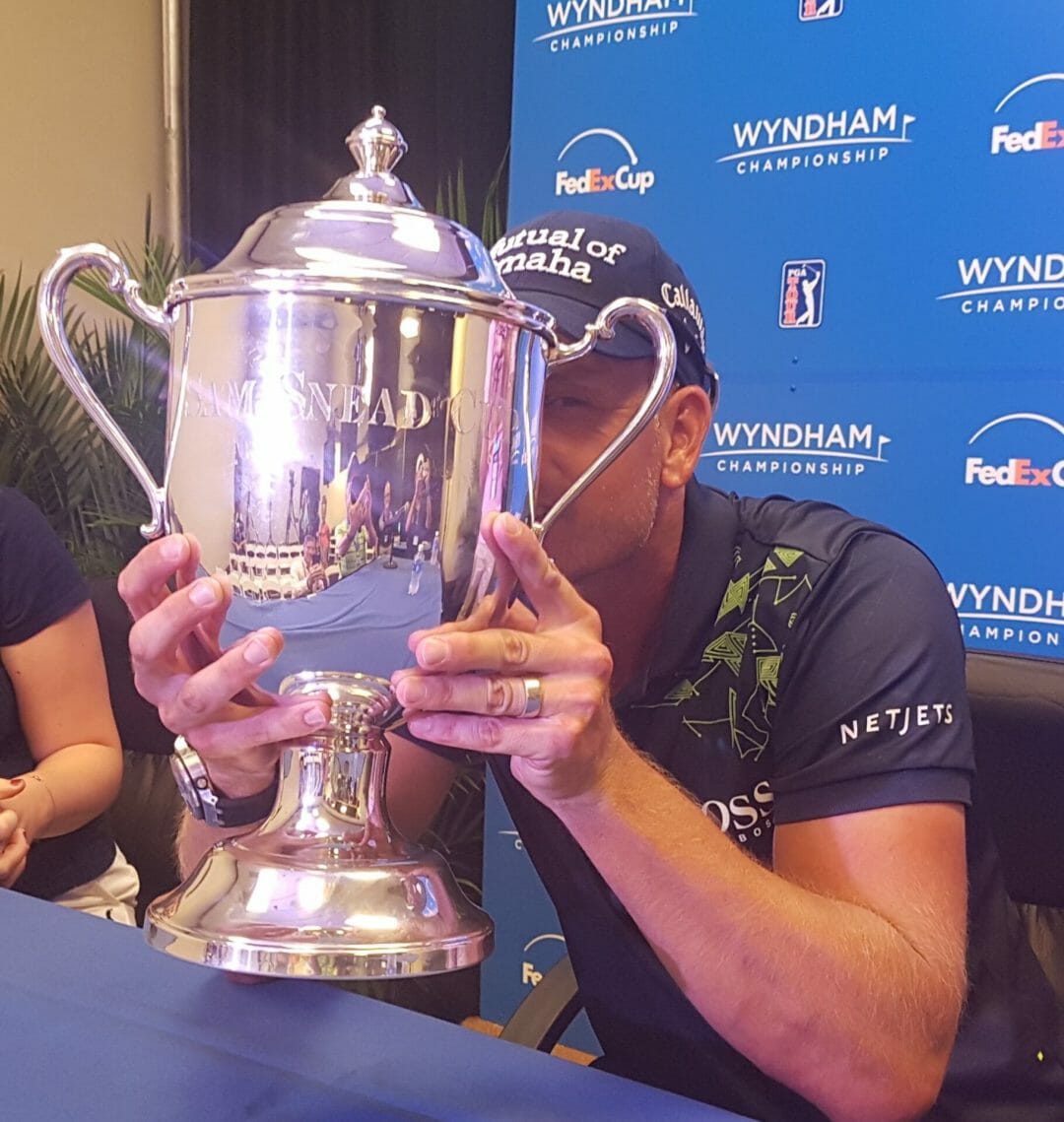 For most inside the ropes that week it’s a ‘cool’ event and that’s more evident as the ‘Wyndham Rewards’ tee markers feature a miniature red-and-white beach umbrella, a mini adjustable blue beach chair and a tiny pair of flip flops laid out in a beach scene.

However, for many others teeing-up in this week’s $7.3m tournament, it will be an anxious four rounds for the field that I am going to place into three categories.

FIRSTLY – There’s those guys who are currently outside the top-125 who seek to retain full PGA Tour membership and they include the likes of North Carolina native and past US Open winner Web Simpson.  Simpson is 126th on the FedEx Cup standings and normally would need to be among the top-125 come Sunday night if he’s to retain his Tour card. However it’s a sad first this week in the Tour’s history, as all those LIV golfers among the top-125 such as Brooks Koepka (106th) will come off the list at the end of the Wyndham. All Simpson needs to do is make the cut and he’ll be fine for season 2022/23.

And talking of battling to retain your Tour card, how about Seamus Power?  Power has chosen not to tee-up this week for a first time in five prior straight nail-biting Wyndham years for a very simple reason. He doesn’t need to be at the Wyndham.   Currently 25th on the FedEx Cup standings the Waterford golfer’s probably chilling out in a full-size beach chair and shading umbrella. It’s Power’s luxury knowing he could very well qualify to contest all three ‘Play-Off Series’ events for the first time in his pro career. What a wonderful turnaround in fortunes for the affable Irishman compared to the anxiety of his opening four visits to Greensboro.

SECONDLY – Koepka’s scenario will help the likes of Aussie Jason Day in ending the Wyndham among the leading 125, as it will mean Day, should he not be overtaken in his current 115th standing, will qualify for next week’s opening event of the lucrative FedEx Cup ‘Play-Off’ Series and that’s the $15m FedEx St. Jude Championship in Memphis. Another LIV player to be pulled off the list is Day’s compatriot Matt Jones, lying 62nd on the standings.

THIRDLY – I’ve put Lowry in the third category.  He’s had a cracking season after bravely finishing runner-up after a last hole cloudburst robbed him of victory at the Honda Classic ahead of three straight thirds, starting with third at the Masters.

Lowry’s efforts in his 15 events earned the Offaly golfer close to $3.3m this year in PGA Tour prize money.  What Lowry hasn’t done is win. He gets that chance this week in returning to the Wyndham since his share of 23rd in 2020.

Shane?  Just to let you know. I’ve already got my hand up for margarita for the victory toast while there’s a Jimmy Buffett song just a dime away…

HOWEVER: After a few weeks post the 150th Open back home in Ireland,Lowry’s return to the US has not gone to plan with him first posting a tweet advising his luggage and golf clubs were missing on a flight out of Dublin, and asking Dublin Airport for help.

Lowry was travelling from Dublin to Chicago and then connecting with a flight that will take him to Charlotte in North Carolina and a short drive to Greensboro for this week’s Wyndham Championship.

In posting a first tweet, Lowry exhibited his frustration by adding a hilarious short video clip from Father Ted to highlight his concern.

That was posted around 1pm early afternoon Irish time Tuesday and then about an hour later, with Lowry then in North Carolina he posted a follow-up tweet saying:

Update…Thanks to the lads at @DublinAirport who confirmed my bags are in Chicago.@AerLingus @fly2ohare @united can you help get them to me in Greensboro?

But two hours later at 9.30pm Irish time there was another worrying tweet with Lowry posting  a picture of his suitcase and his golf bag with the message:

Bags still missing at Chicago airport @fly2ohare @united! Anyone there able to help find them. There will be rewards 🙏🏻🍻🥃☘️🤞🏻 pic.twitter.com/6vq6IbkhBV