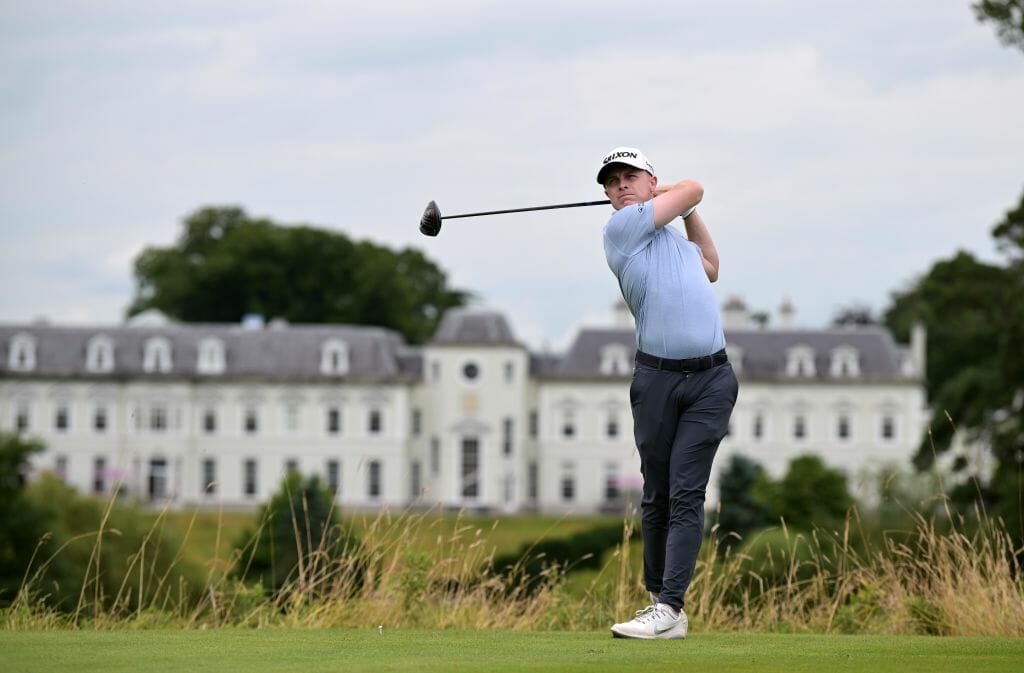 Conor Purcell hailed a strong day around the greens for his seven-under 65 at The K Club as he finished the opening day of the Irish Challenge just a shot off the early lead.

The Portmarnock man dazzled with five birdies and an eagle to hold a share of second place and is the best Irishman in the field after the opening round, one shot back of Switzerland’s Joel Girrbach.

Starting at the 10th, Purcell birdied the first and last holes of his opening nine – including chipping in for birdie at the par-five 18th – and he rode that momentum into his inward nine, which yielded three more birdies and an eagle at the par-five seventh.

And it was that work around the green that the 25-year-old was left hailing after his round, claiming that was what kept his momentum alive to go on and post a low score.
“I had a couple of nice saves and a few momentum keepers,” said Purcell. “I hit it over the back on 18, it wasn’t a very nice shot and I managed to chip it in so that flipped things around.
“It was stress-free from there for a few holes. I had a basic wedge shot on the 5th hole from 90 yards and I nearly flubbed it straight into the bunker. I chipped it to nine feet and holed it for par and then went birdie, eagle. It’s little things like that that keep the round going.”
Girrbach set the early pace with an eight-under 64 at the Palmer South course, eight birdies, an eagle and two bogeys giving him a one-shot advantage over Purcell, Italy’s Stefano Mazzoli and France’s Gary Stal, who all carded 65s.
One shot further back, Kinsale’s John Murphy also had a strong start to his tournament as seven birdies and a bogey has him in a share of fifth place after a six-under 66 and, going out in the afternoon wave after Girrbach and Stal had already returned to the clubhouse, he adopted a patient approach.
“I saw going out that there was an eight-under and a couple seven-under so you knew scoring was going to be low,” said Murphy.
“That might add to the pressure a little bit, you definitely expect a lot of yourself going out there but I managed to stay patient and I took my chances when they came.”
Galgorm’s Tom McKibbin looked to be on for a big week as well after seven birdies in his first 17 holes and with the par-five 18th to come, but a poor drive led to a drop a long way back and a double-bogey meant he would finish three back after a five-under 67.
“Just didn’t hit a great tee shot and we were discussing whether it crossed, we weren’t really sure. Better just to be safe and drop it back there rather than making a mistake. It is what it is,” said McKibbin, who is 30th in the Road to Mallorca standings.
“I played nice today. Seven birdies thru 17 is very nice. I knew the course was pretty scoreable after the first round and the practice rounds. Overall it was a good day. I’m out nice and early (tomorrow), so hopefully there’s not much wind. Should be another good day.”
Castle amateur Robert Moran had an excellent round as six birdies and two bogeys led to a share of 15th after a four-under 68, where he is joined by The Island’s Paul McBride, who had an identical scorecard, and Saadiyat Beach-based Gary Hurley, who had an extra birdie and bogey.
The rest of the Irish players in the field are battling to make the cut, however, with the mark currently lying at one-under-par as scores went low at The K Club on day one.
Mallow’s James Sugrue, Rosapenna’s Ruaidhri McGee and Donabate’s Gavin Moynihan are all at level-par after 72s, with Naas’ Jonathan Yates, Galway’s Ronan Mullarney and Ballymena’s Dermot McElroy all a shot further back having opened with 73s.
Wexford man Rhys Clarke and Malone amateur Matthew McClean fired two-under 74s in their first rounds, Kilkenny amateur Mark Power and Naas’ Conor O’Rourke signed for a pair of 75s, with Michael Young and The K Club’s own Liam Grehan at four-over following a 76 apiece.
Waterford’s Robin Dawson opened with a 77, as did Dublin’s Charlie Williams, with PGA Catalunya’s Luke Donnelly at six-over after a 78 and North and South of Ireland champion Hugh Foley carding a 10-over 82.
SCORING