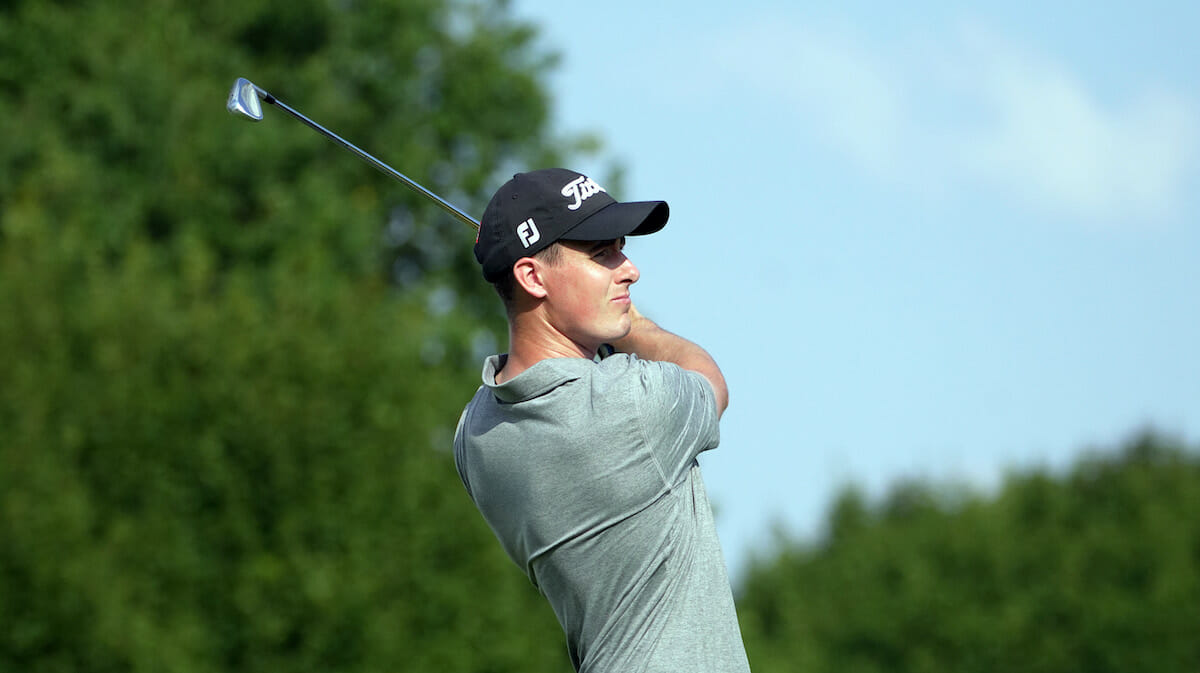 Gary Hurley was pleased to produce the golf he’s been playing all year in front of a decent home crowd after posting a four-under par 68 on the opening day of the Irish Challenge at the K Club.

The West Waterford pro started from the tenth tee and was fiver-under at the turn courtesy of five birdies. Hurley sandwiched a first bogey of the day in between birdies at 3 and 5 to move to six-under on the round before signing off with successive bogeys on 8 and 9, leaving him inside the top-10 on four-under and four back of the early clubhouse lead.

“I played some really nice golf today,” Hurley reflected. “I had nice support out there following me around which was great, I haven’t had that in a while so it was nice to play some of the golf I’ve been playing all year.

“I’ve had a tough few years at the Irish Challenge. I generally haven’t played well at the tournament but I’ve always had great support at home so it was nice to play well in front of them and give them something to cheer about.”

Hurley had spoken before the tournament about a change in behaviour that has reaped rewards this season. Not only did he break through with victory on the Alps Tour but he’s been super consistent and sits inside the top-5 on the Order of Merit knowing that should he stay there, he’ll earn Challenge Tour promotion next season.

That behaviour was on full show on the opening day on the Palmer South where Hurley walked with an air of calm, accepting the bad shots, of which there were few, en route to posting an ideal start.

“I’m separating the shot outcome, anything to do with where the ball is finishing. I’m reflecting on my process rather than reflecting on what’s happening with the ball,” Hurley explained of a change in approach that has influenced his life away from the course as well.

“A bit more chilled, bit more relaxed, less anxiety ridden which is great. But all those nerves are still there, they don’t go away. I just choose to accept them for what they are and I choose my own narrative on the course: What I want to be, how I want to think, what I want to do. And that’s pretty much what I changed.”

If you want an example of how Hurley has changed, you only have to listen to how he describes finishing bogey-bogey. It’s safe to say it wasn’t about to dampen his day.

“Even the finish, I was brilliant there,” Hurley said of a three-putt bogey on 8 before chipping out from the fairway bunker on the par-4 ninth and taking ‘5’.

“I bogeyed the last two holes but it doesn’t really matter, it’s not that important in the grand scheme of what I’m doing. I was engaged in every shot completely for however many shots I played those last few holes in.

“[The old Gary] He might’ve said he was having such a good day and now it’s not. But you could flip it around, finish birdie, birdie and shoot four-under and you’d be a different person so why do you choose to be despondent when you finish bogey, bogey?

Hurley trails Swiss star Joel Girrbach by four shots after he opened with eight birdies and an eagle to set the early pace with an eight-under 64 in ideal scoring conditions on Thursday morning.