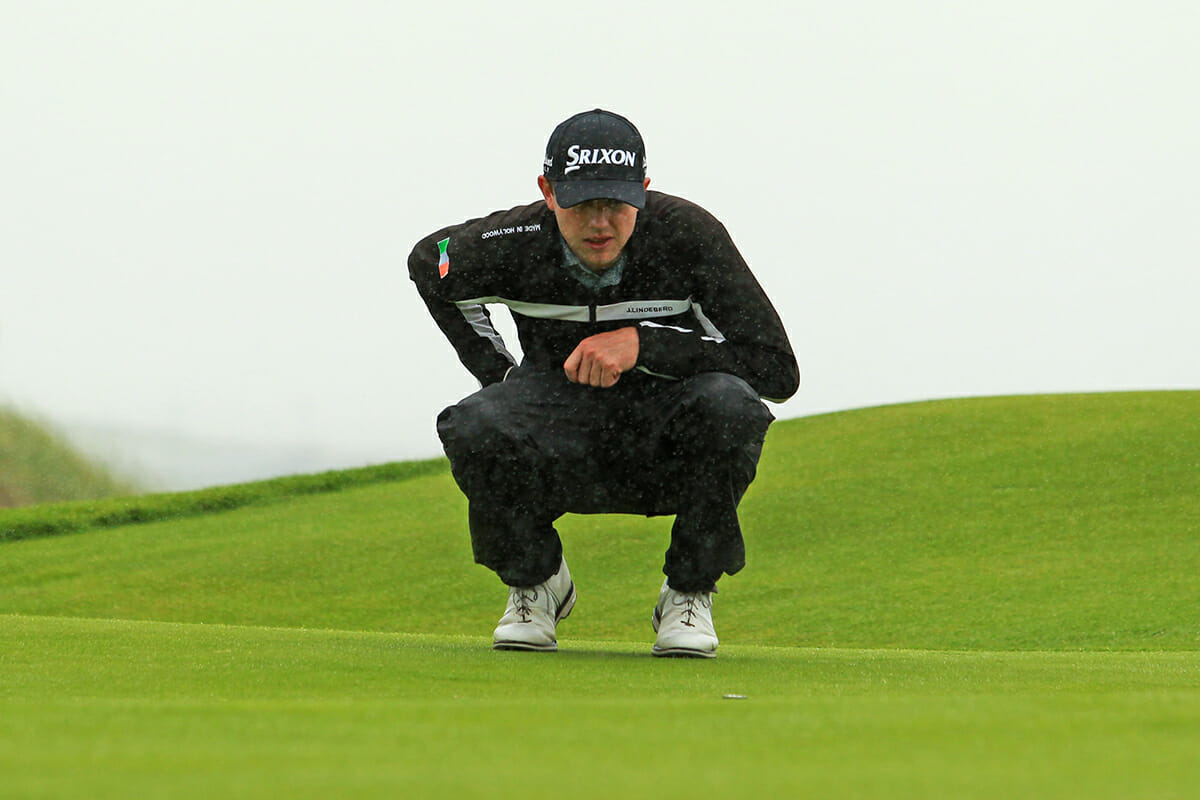 Hugh Foley (Royal Dublin) in action in the quarter-finals at the South of Ireland Championship at Lahinch Golf Club. (Image: Niall O'Shea)

Royal Dublin’s Hugh Foley has no intention of resting on his laurels as he targets a place on the 2023 Great Britain and Ireland Walker Cup team at St Andrews.

Foley was speaking after adding the South of Ireland Championship at Lahinch to the North of Ireland title he won in Portrush last weekend which took his major tally to four in three years having won the West and the Irish Close.

Competition for places on the Irish squads is extremely high with East of Ireland winner Alex Maguire being left out of the European Team Championships while fellow Home International winners Jack McDonnell, Marc Boucher, West of Ireland winner Alan Fahy and Peter O’Keeffe have also been left out of squads this term and Foley knows he must keep up his great form to get a sniff of emulating Irish teammate Mark Power next year.

“The Walker Cup is the pinnacle of Great Britain and Ireland amateur career. I’m trending nicely. It’s a bit form based as well,” said Foley who became the first player since Darren Clarke in 1990 to win the North and South. “I obviously missed out on last week’s (St Andrews Trophy) team and that definitely gave me a little bit of an edge to get back on the horse the last two weeks.

“I am delighted with those two weeks. It’s form based. I guess there’s a chance I could be picked if it were picked next week I might be on it. That’s the goal but it won’t be the only goal of mine.

“Another goal is to try and win again and win overseas that is vital if you are to get onto these teams.”

The Clontarf native had been enduring a quiet season by his standards which culminated in him being left out of the St Andrews Trophy squad where Power, Matt McClean and Rob Moran tasted glory. His best finish was third at the Scottish Men’s Open while he had missed cuts at the Amateur and European Amateur before he teed it up in Portrush.

However, he has made a habit of putting form to one sind and rising to the top as he did in the West and Close. A change in mindset and some technical repairs with long-time coach Geoff Loughrey – resurrecting his trusty fade – have paid dividends in abundance over the last fortnight.

“Technique wise I changed a little bit. I had a bad shot. I have always faded the ball but I had a bad shot in me which is over the top and a big pull left. So I started to draw the ball to get the club path straightened up. It worked for a little bit and then I found under pressure my body almost rejected it.  So I struggled a bit. I started to struggled under pressure at the British Amateur and European Amateur. I was really down after that but I went back to try and fade it and I’ve been doing that all my life so it didn’t take too long I guess , I put in hard work with my coach Geoff Loughrey I can’t thank him enough.

“I felt like I was so used to drawing it, I could draw it too if I really needed to. So I had way more confidence all of a sudden. My expectations were down so I took the pressure off myself and it all came together at the same time.

“I just thought back on the back nine at the north if I am being honest. And that seemed to work. I tried to stay relaxed, almost as if I was playing strokeplay and just tried to make birdies and be aggressive. And all swings I put together over the last few holes worked,” added the 25-year-old who just needs the East of Ireland and Irish Amateur Open championships to complete the set on his illustrious CV.

“East, the Irish Amateur. There are two left but the St Andrew Links is on the same time as the East which is unfortunate. So I won’t play it, I guess. But the Irish Amateur at The Island, that would be nice. But it is all form. We’ll see.”