Clarke and Broadhurst set for final day battle at Gleneagles 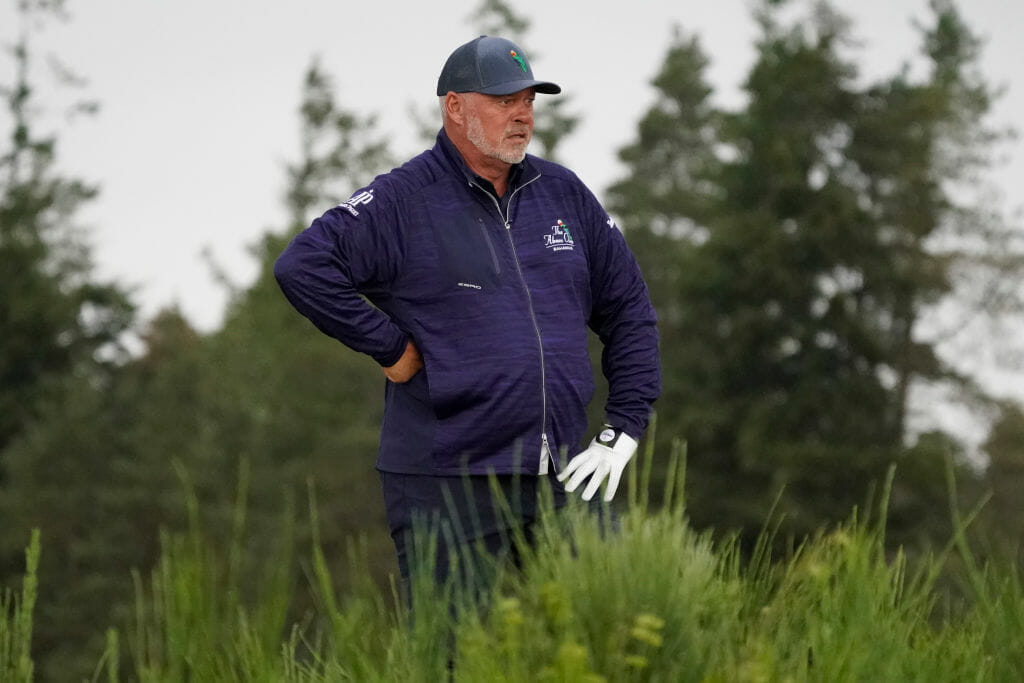 Darren Clarke in action during Day Three of The Senior Open Presented by Rolex at The King's Course, Gleneagles in Auchterarder, Scotland (Photo by Phil Inglis/Getty Images)

Darren Clarke birdied the last to join Paul Broadhurst at the top of the leaderboard ahead of the final round of The Senior Open Presented by Rolex.

The Northern Irishman entered the third round with a two-stroke lead but, despite giving himself chances, could only post a one under par round of 69 as England’s Broadhurst went three strokes better to share the lead on nine under par at Gleneagles.

The Englishman, who won the Senior Open in 2016, responded to a bogey at the 12th with a trio of birdies from the 13th to card his four under round of 66 and put the pressure on Clarke with the rain getting heavier as the day went on.

Clarke dropped back-to-back shots on the 12th and 13th but steadied the ship to par his way in before his closing birdie ensured he would take a share of the lead into the final round where he will bid to add The Senior Open trophy to the Claret Jug he won in 2011.

“I’ve gone out there and I’ve played nicely all day,” said Clarke.

“I’ve given myself chance after chance. I’ve hit good putts. They just haven’t gone in. I’ve hit 17 greens leading the tournament and played lovely. At least one decided to go in at the last.

“Everybody has practised and we got some rain today and I lost my speed today. I think that’s what happened, and I got away with that tee ball on No. 12, and then got a hybrid onto the green and three-putted. I just lost my speed there. It was difficult with the moisture on there. But it’s the same for everybody.

“It would be pretty cool to have both of them sitting beside each other, you know what I mean. I would love to win the Senior Open as well as the main Open.

The duo are one stroke clear of New Zealand’s Steven Alker and American Jerry Kelly, both Senior Major Champions, who share third place on eight under par. Eight-time European Number One Colin Montgomerie is the leading Scotsman in a share for fifth place on six under, alongside Australian Stuart Appleby, Thailand’s Thongchai Jaidee and Major Champions Ernie Els and Pádraig Harrington.

Four-time Senior Open winner Bernhard Langer is a shot further back in a tie for tenth place alongside South Africa’s James Kingston.