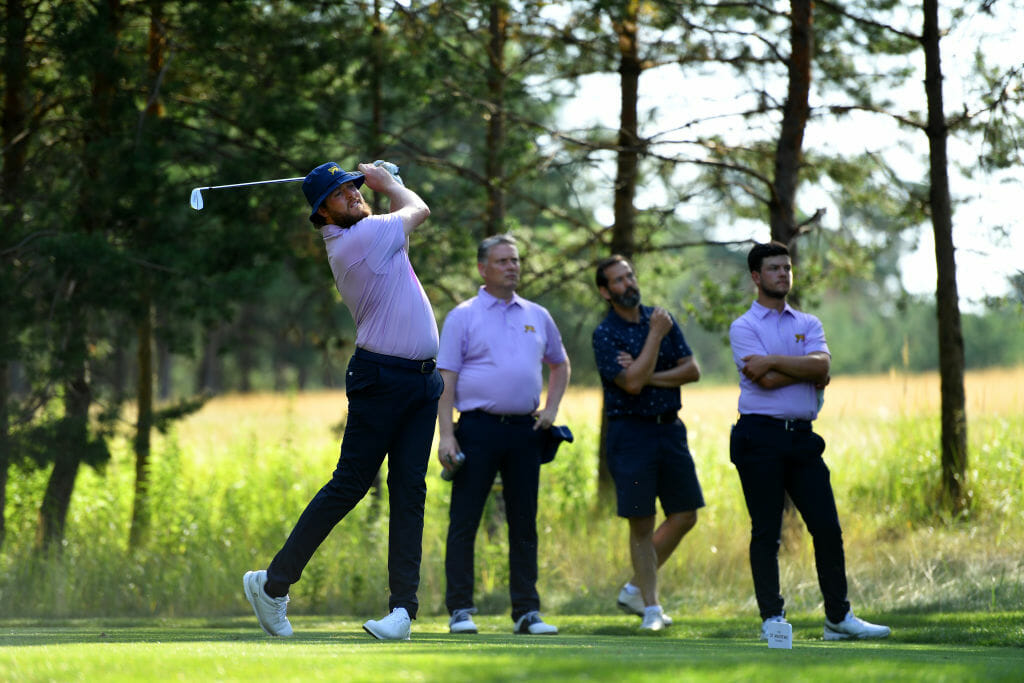 Matthew McClean of Great Britain & Ireland tees off from the 3rd hole during Day One of the St Andrews Trophy at Penati Golf Resort in Senica, Okres, Slovakia. (Photo by Tom Dulat/R&A/R&A via Getty Images)

A dominant singles from Great Britain and Ireland put them firmly in the driving seat at the halfway stage of the St Andrews Trophy after they opened up a four point lead at Penati Golf resort.

A thumping 6-2 win in the afternoon singles matches saw GB&I pull 8-4 clear as they bid for a third title in four editions.

The biennial contest made it’s return after a four-year hiatus due to Covid restrictions with Europe teeing it up as defending champions knowing a draw would see them retain the title they won in 2018.

Mark Power earned a hard fought 2&1 win in his singles match over Portugal’s Daniel Da Costa Rodrigues to set GB&I on their way to a dominant period in the singles ties.

The visitors won four and a half of the next five points to soar clear of their hosts after they had won one, drew one and lost one of the opening three singles matches.

Robert Moran came away with no points from his morning foursomes and afternoon singles matches going down 3&2 and 1DN to Alton Albers in the afternoon.

John Gough won the top singles match to send GB&I on their way while Arron Edwards-Hill came out on the right side of a thumping 6&5 defeat of David Lundgren of Sweden.

The tie was level after the morning foursomes with each side earning a full point in the top and bottom matches while the middle matches were honours even.

Gough whose father hails from Co. Meath partnered Castle’s Moran in the opening foursomes match but they went down 3&2 to German duo Anton Albers and Laurenz Schiergen as the Europeans drew first blood.

Edwards-Hill and Callum Scott came away with a share of the spoils in their match while Power had to be content with a half point alongside Barclay Brown who impressed at the Open Championship last week.