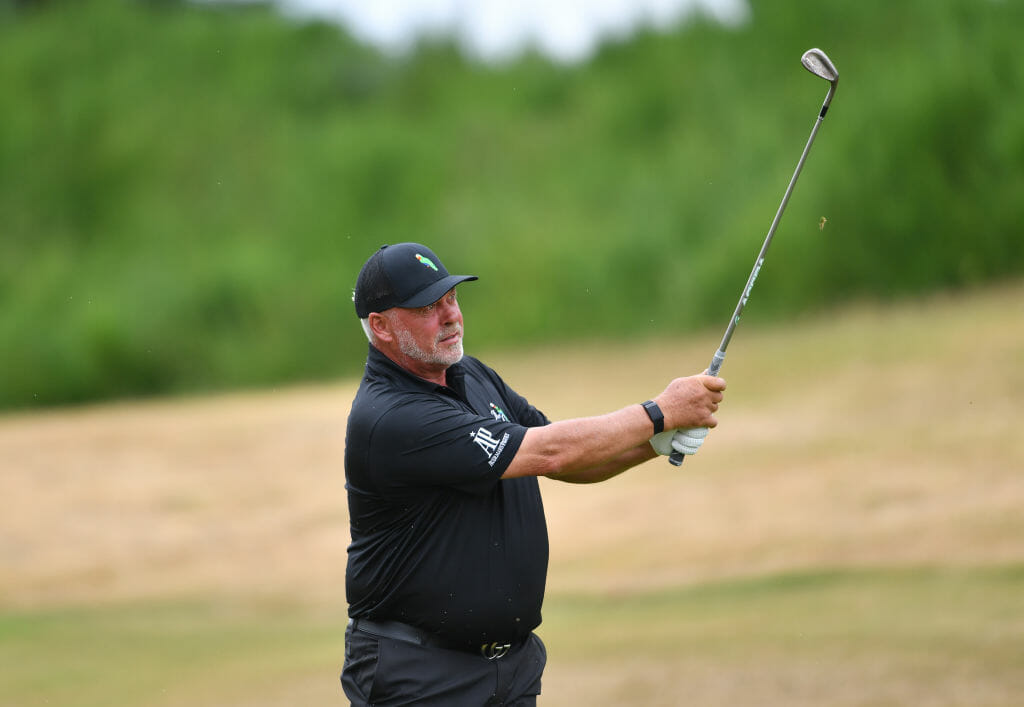 A closing hole birdie delivered Darren Clarke a bogey-free five-under par 65 and a well-earned share of third on the opening day of the Senior Open by Rolex at Gleneagles in Scotland.

Clarke was among the afternoon half of the draw and took great advantage of the much cooler conditions to end his round just a shot adrift of Canadian Stephen Ames and American Glen Day, who brilliantly eagled the last, lead the field on six-under.

Ames, 58, arrived in Scotland having finished runner-up to Kiwi Steve Alker in May’s Senior PGA Championship, and Ames’ best finish in 28 majors for the over-50-year-olds.

Clarke, 53, is making his third Senior Open appearance having finished third a year ago to Welshman Stephen Dodd.

Fellow Irishman Padraig Harrington is just a shot back of his fellow Open Champion having grabbed six birdies in his four-under 66.

Harrington is contesting just a third seniors major, and teeing-up as the reigning US Senior Open champion while he capped his round with a hat trick of birdies from the ninth to 11th holes.

“I’m happy with the score”, he said. “I was very tentative. I putted well and my putter saved me most of the day. Definitely, yeah, I could have been just a little bit, I suppose, yeah I was just tentative with my iron shots particularly.”

Harrington had been a vice-captain under McGinley and has always been a favourite of the course, and that was borne out on the opening day at Gleneagles.

“On 17, I missed the fairway, and that was a difficult shot and maybe I’d have hit the iron off the tee. But I like it off the tee to be honest, and that’s why I’m saying I should have been a bit more aggressive into the greens. I think you can set up a lot of chances out there.

“Also, it depends on the golf course. Not necessarily this golf course because I played with Corey (Pavin) today and he’s probably one of the shorter hitters and he reached the two par 5s and the par 4 today. Wouldn’t be a big advantage on this golf course.

“But it does no harm, either, hitting the shorter iron shots the same distance. It is an advantage but some golf courses, like the U.S. Open, it’s a big advantage”.

Paul McGinley signed for a one-over 71 having picked-up his only birdie at the 10th hole following nine straight pars but then dropping shots at 11 and 13.

Westport’s Sean Fitzgerald, who was second in a 36-hole qualifier for The Senior Open, tailed out the Irish contingent with a six-over 76.