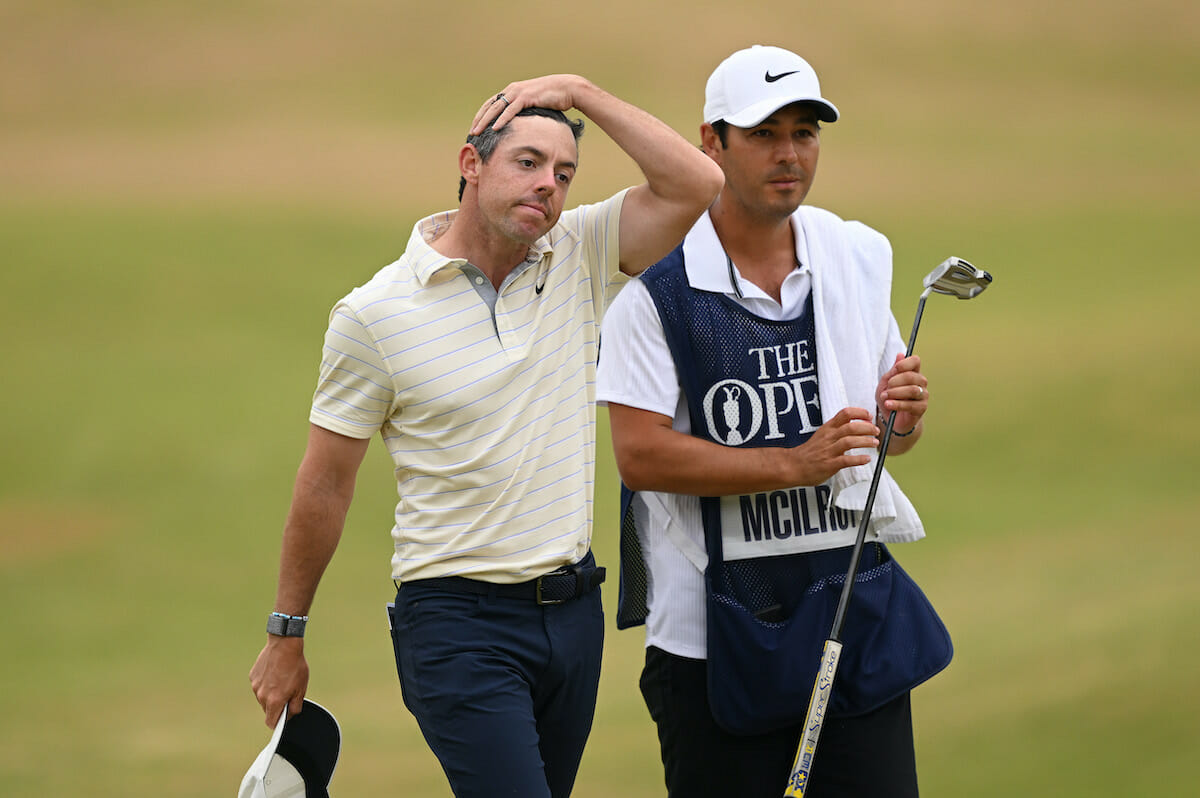 Rory McIlroy’s quest to arrest an eight-year major championship drought came unstuck by a simply sensational birdie onslaught from Cameron Smith as the Aussie roared to his maiden major triumph at the 150th Open Championship.

The man from Down Under reeled off five successive birdies to turn the final day at St Andrews on its head and give this wonderful championship a fitting climax on its 150th edition.

McIlroy eventually finished third on eighteen-under after a disappointing two-under 70 where a cold putter stifled his challenge.

In the end it was Cameron Young who took the runner-up spot with a stunning eagle two on 18 to level with Smith for only moments before the Players Champion rolled in a two-footer on 18 for a twenty-under total and a final round 64.

Smith found himself three adrift of McIlroy at the turn after seeing a short birdie attempt on nine slip by but after holing virtually nothing for 27 holes the mullet-man took the championship by the scruff of the neck and launched an assault on McIlroy with five birdies from the tenth to the fourteenth to move one clear.

The Australian then moved into cruise control until he found trouble on the 17th. His approach looked to have snookered him by the road hole bunker but he holed a ten foot putt for a massive par, that proved to be the killer blow.

In truth, it was a simply awesome performance from Smith who will enjoy the taste of redemption after heartache at Augusta earlier this year. It was a Sunday afternoon that was just ambling along until he stood up and was really counted.

The 28-year-old began the day four shots back and is the first Australian winner of the Open since a certain Greg Norman in 1993 and he is also the first Aussie major winner since Jason Day at the 2015 PGA Championship.

While Smith held almost everything in sight on the back nine, Rory produced a turgid performance with the flat stick, leaving several putts out to the left.

Opportunities on the third and ninth in particular went begging and while a birdie on ten moved him three clear with eight to play, he was unable to find the required birdies on 12 or 14 that would have avoided the desperate situation that unfolded on 18.

The four-time major winner needed to hole-out from short of the valley of sin for an eagle to force a playoff, he missed and in a rather fitting way he missed the subsequent birdie putt to the left as he summed up a frustrating day where he produced a near flawless performance from tee to green but proceeded to the next tee box empty handed.

“Disappointed obviously. Yeah, I felt like I didn’t do much wrong today, but I didn’t do much right either,” explained McIlroy who had led after 54 holes for the first time since winning the PGA Championship in 2014.

“It’s just one of those days where I played a really controlled round of golf. I did what I felt like I needed to, just apart from capitalising on the easier holes — around the turn, 9, 12, 14. If I had made the birdies there from good positions, it probably would have been a different story.

“But, look, I got beaten by a better player this week. 20-under par for four rounds of golf around here is really, really impressive playing, especially to go out and shoot 64 today to get it done.

“Yeah, I’ll rue a few missed putts that slid by. But it’s been a good week overall. I can’t be too despondent because of how this year’s went and this year’s going. I’m playing some of the best golf I’ve played in a long time. It’s not life or death. I’ll have other chances to win the Open Championship and other chances to win majors. It’s one that I feel like I let slip away, but there will be other opportunities.”

In the end, the Holywood native finished third in what looked like a two horse race at the start of the day and while he seemed upbeat about the future there is no doubt this one will sting, after all the pre-round chatter and excitement surrounding him turned to disappointment and disheartened sighs.

Italy’s Filippo Celli took part in the trophy ceremony as he scooped the Silver Medal becoming the first Italian to finish as low amateur at the Open since Matteo Mannassero in 2009.

Shane Lowry capped off a ‘what might have been week’ with a two-under 70 to share 21st on nine-under.

It was another steady effort from the 2019 Open Championship but he is now at the level where not contending is no longer good enough and he couldn’t hide his own disappointment at not putting himself into position to contend after back-to-back eagles on Saturday.

“It’s been a tough weekend,” lamented Lowry who will take a well needed break in Ireland before targeting a run in the FedEX Cup.

I’ve never felt as good coming into a tournament like this. I felt like I could really — this could be my week. It’s not, so I’m obviously very disappointed. I’m going to have two weeks off now, and I’m going to go back to Ireland for a couple of weeks.

“I haven’t had time in Ireland for a long time without my golf clubs, so I’m just going to put my golf clubs away for a couple of weeks and spend some time with my family and my kids and maybe do a little trip in Ireland and enjoy myself.

“TOUR Championship for the PGA TOUR is obviously huge, and got some big tournaments left in Europe as well. So, yeah, I’ve obviously got a lot to play for. I’d really like to get back to well inside that top 20 in the world. I’ve got that to play for towards the end year.

“Yeah, hopefully I can just kind of keep doing what I’m doing and find a bit on the greens, and I’ll be dangerous enough.”

Darwin Escapes professional David Carey can take heart from his Open debut as he finished 62nd after weekend 73s saw him drift out to three-under.