Emotional Woods: This might be my last Open at St Andrews 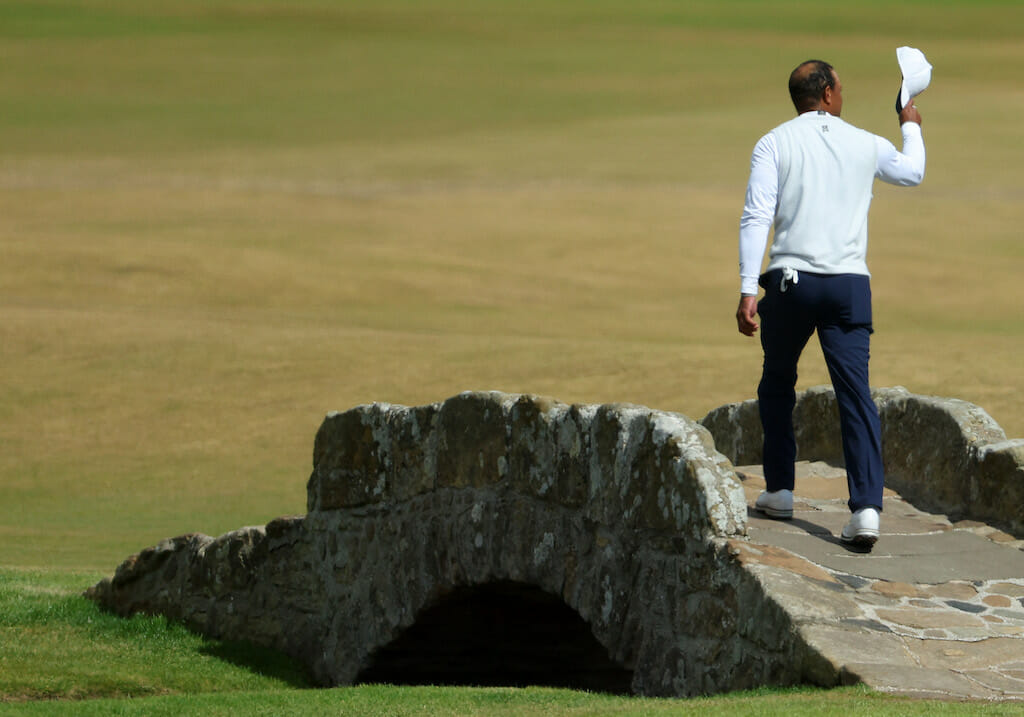 Tiger Woods was emotional after missing the halfway cut at the Open Championship at St Andrews in what he predicts might be his last appearance in the event on the famous Old Course.

Woods was struggling from the minute his opening drive on Thursday found a divot, signing for rounds of 78 and 75 for a nine-over par tally as he looked a long way off full fitness for his 36-holes in St Andrews.

Tiger, we hope to see you at St Andrews again

Twice a champion at the Old Course, Woods looked a shadow of his 15-major winning self as he continues to recover from injury and although he’ll persist with his rehabilitation in the hopes of returning to golf’s top table, Woods believes another Open date at St Andrews might be beyond him.

“So to me it felt like this might have been my last British Open here at St Andrews. And the fans, the ovation and the warmth, it was an unbelievable feeling.

“I understand what Jack and Arnold had gone through in the past. I was kind of feeling that way there at the end. And just the collective warmth and understanding. They understand what golf’s all about and what it takes to be an Open champion.

“And I’ve been lucky enough and fortunate enough to have won this twice here. And it felt very emotional, just because I just don’t know what my health is going to be like. And I feel like I will be able to play future British Opens, but I don’t know if I’ll be able to play that long enough that when it comes back around here, will I still be playing?”

As Woods walked up 18 with no thoughts of stopping on the Swilcan Bridge to say goodbye, it was a hat tip from Rory McIlroy and the general outpouring of affection for the one they call GOAT that got to the normally stoic 46-year old American.

“I saw Rory right there. He gave me the tip of the cap. It was a pretty cool — the nods I was getting from guys as they were going out and I was coming in, just the respect, that was pretty neat. And from a players’ fraternity level, it’s neat to see that and feel that,” Woods said.

“And they all had appreciated what I’ve done here for the years I’ve played — I’ve won two championships here — my British Open success and all my times I’ve enjoyed here in Scotland and playing, I felt like it just came to a head right there as I was walking to my golf ball.”

“I put my heart and soul into this event over the years. And I think the people have appreciated my play in the event. I’ve won it three times. And to have Peter Dawson say it all three times was pretty neat.

“Life moves on. And I think that’s what people understand. And they knew my circumstances this year, of just playing, period. I was very lucky to have had a great team around me to get me to where I was physically able to play three times this year and very thankful to all of them for getting me to this spot.”