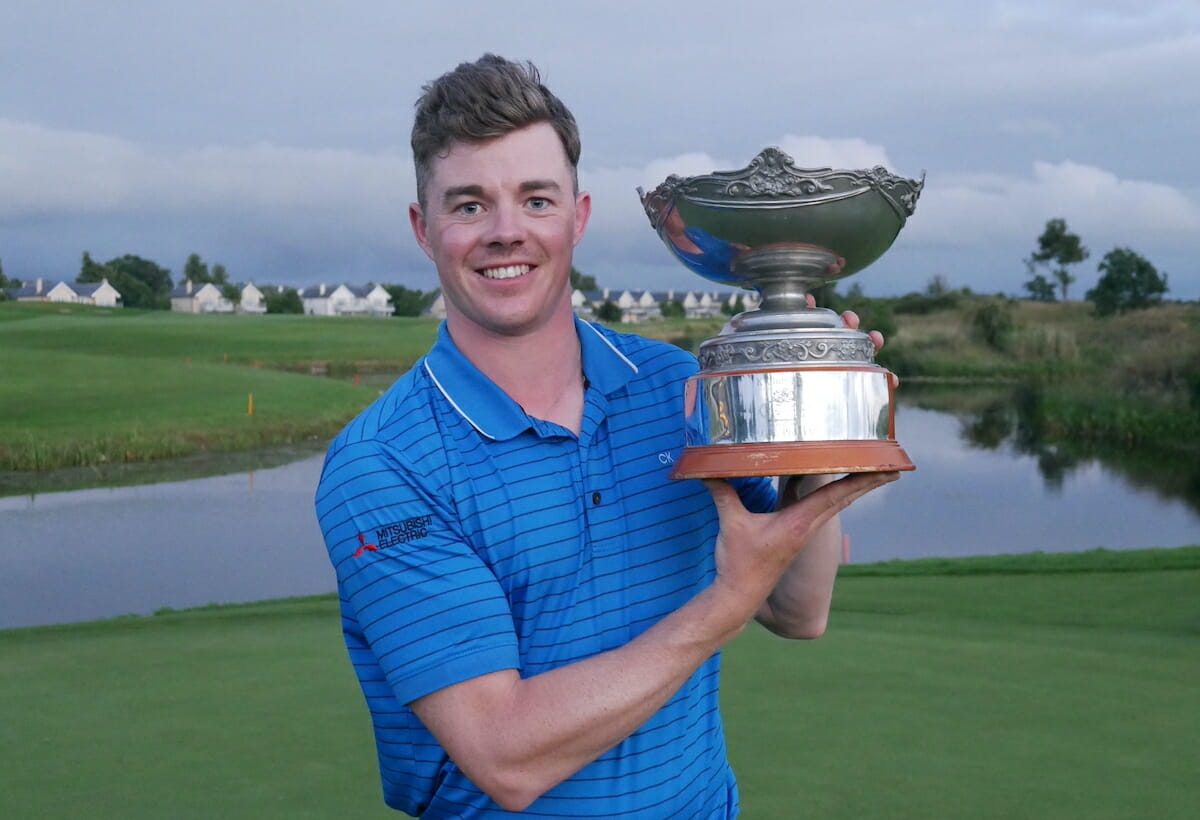 Tullamore’s Stuart Grehan came out on the right side of a ding-dong battle against the K Club’s own Liam Grehan to seal an impressive one-shot victory at the CFM sponsored €100,000 K Club Pro-Am.

Stuart added a six-under par 66 on Palmer South to his opening 67 on the North to set an imposing 11-under par target but Liam would come within a whisker of matching the 36-hole tally; lipping out on his final hole for birdie before signing for a 66 of his own and a 10-under total.

“I’m very happy,” said the victorious Grehan, a regular on the EuroPro Tour.

“I’ve been playing pretty solid the last couple of weeks. Ball striking has been really solid, I just needed to get the putter going but I’ve putted nicely the last few days and hit it well so it was nice to get the job done.”

Holding a slender one-shot advantage entering the final round, Grehan refused to look in the rear-view mirror, powering to the finish line and coming out on top against a field filled with Ireland’s best PGA pros.

“I can’t thank Director of Golf Conor Russell and Ray Moore enough for getting me in,” said Grehan. “I love the K Club, especially the North Course, it’s one of my favourites so I’m delighted.”

With a Challenge Tour date on the horizon on the Palmer South at month’s end, Grehan will be hoping secure another invitation to the K Club to build on this win.

“I’m not too sure if I’m playing it yet but after this, I’m hoping to get an invite,” Grehan smiled. “But it’s nice to get a win. I’m actually flying to Birmingham first thing in the morning. 3.30am alarm so I might have a glass of wine to celebrate this and hopefully there’ll be a few more wins to come over the rest of the season.”

For local favourite Liam, there was plenty of consolation to be found after falling on his shield on Tuesday; his bogey-free final round effort enough to secure his place as the leading PGA pro on the week with order of merit points and more lucrative starts to come off the back of this result.

“I’m delighted with how I played, disappointed with the result but I played really well,” said Liam.

“I knew from going to college in Maynooth with Stuart that I’d need to go low. I wasn’t firing at pins today, I just stayed patient and took my chances when they came for the most part but just fell one shot shy in the end.

“Still, I’ll take a lot of confidence from this for the rest of the season. It’s the best I’ve played in ages and definitely something to build on.”

Route 66 was a popular way of getting home on Tuesday at the K Club with Banbridge’s Richard Kilpatrick coming through to take the last place on the podium on four-under par.

Steven Quinlan (SQ Golf) and England’s Liam Bond were the only other players to finish under par through 36-holes on minus-one.

97 teams teed it up at the K Club but none fared better than Ardee Golf Club’s Brian Kerley and his amateur partners Matthew and Kevin Cummins and Tom Muldoon who prevailed in the team competition with a brilliant score of 195 points.