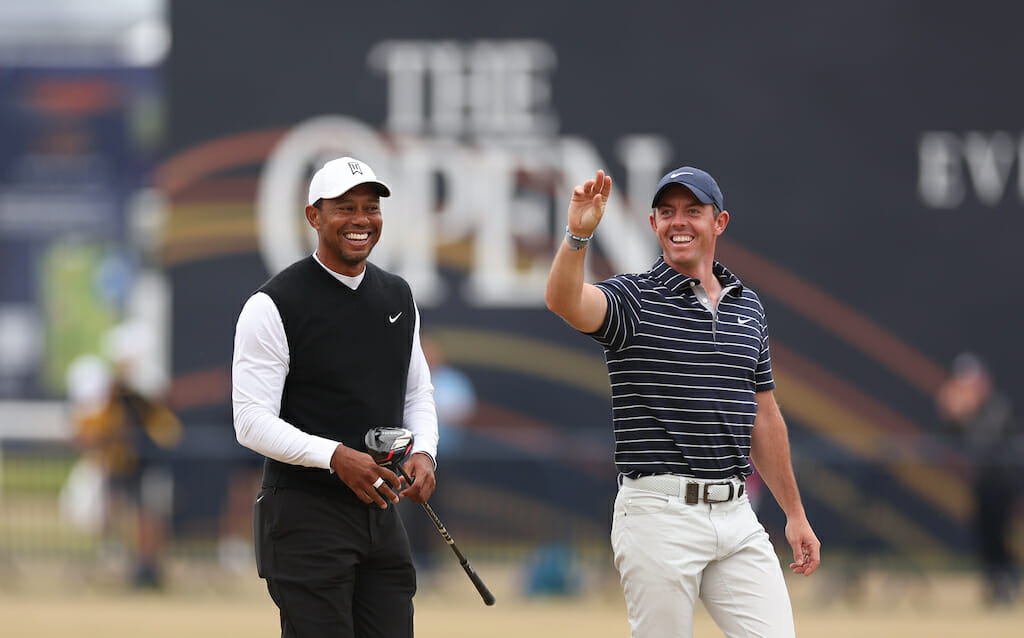 Jack Nicklaus famously said, “If you’re going to be a player people will remember, you have to win the Open at St Andrews”, and while four-time Major winner Rory McIlroy has achieved a lot in the game, a Claret Jug at the Home of Golf has remained elusive.

The last time the championship was played at St Andrews in 2015, the then world number one and defending champion was favourite to claim his second Claret Jug. That was until an untimely injury sustained in a five-a-side game amongst friends saw McIlroy miss the tournament.

McIlroy was asked in his Tuesday press conference at St Andrews whether he believed a career could be complete without claiming a Claret Jug at the Home of Golf. Tiger Woods certainly agreed with Jack Nicklaus’ assessment when asked about the significance of winning at St Andrews but McIlroy wasn’t so sure.

“I don’t know if a golfer’s career isn’t complete if you don’t, but I think it’s the Holy Grail of our sport,” said McIlroy who won the Open at Royal Liverpool in 2014.

“Not a lot of people are going to get that opportunity to achieve that, but that’s what winning an Open at St Andrews is. It’s one of the highest achievements that you can have in golf.

“There’s a lot of great players that have won Opens but maybe not Opens at St Andrews, so I think it’s unfair to say that a golfer’s career isn’t complete without that. But it’s certainly up there with one of the greatest things you can do in our game.”

It’s no surprise that Woods agrees with Nicklaus’ sentiments given that two of his three Open wins arrived at St Andrews in 2000 and 2005. McIlroy played four holes in the company of the 15-time Major winner on Monday evening and despite concerns around Woods’ right leg, McIlroy saw enough in Woods’ movements to believe he can contend come Sunday.

“For those four holes, he was moving better than I’d seen him move in a while,” said McIlroy.

“That was really good to see. Hitting the golf ball and swinging the club aren’t the issue. It’s the walking part of it that’s the struggle. But he seemed to be moving well. Everything looked pretty good yesterday, so that’s encouraging.

“I think the way the golf course is and the way the conditions are, I could certainly see it [Woods winning]. It’s going to be a game of chess this week, and no one’s been better at playing that sort of chess game on a golf course than Tiger over the last 20 years.”

There’s no doubt that Woods has entered a different chapter in his career. In McIlroy’s words, Woods is in the process of ‘winding down’ and appreciating his past achievements, but while McIlroy can acknowledge his own success so far in his career, he remains hungrier than ever to add new memories.

“I’m certainly not at the reminiscing point of my career yet,” McIlroy smiled.

“I look back fondly on what I’ve done so far, but I still feel like I’ve got another decade or more of really good golf left in me. So, yeah, I’m firmly looking ahead and trying to make the most of however long left I’ve got in this game.”

McIlroy arrives to the final men’s Major of the year having top-10’d in all three previous starts. But despite never finishing top-10 in all four Majors in a single season and the consistency that would represent, McIlroy believes he arrives with a game good enough to put himself in the title winning picture again this week. He just hopes his 72-hole score will be good enough to separate him from the rest of the field come Sunday night.

“I’m playing well. I’m in good form. My confidence in my game is as high as it’s been in quite a while,” said McIlroy, who tuned up for this week’s assignment with a game alongside Woods at Ballybunion.

“I can’t go in here thinking that this might be my time. I just have to go out and play a really good tournament. I’ve got to string four good rounds together, and hopefully at the end of the week, that’s good enough to win.

“I’m happy with where everything’s at, and I just can’t get ahead of myself, and just have to make sure that I prepare well the next couple of days and get myself in the right frame of mind for Thursday.”