Saturday leaders in the majority of Open Champions at St Andrews 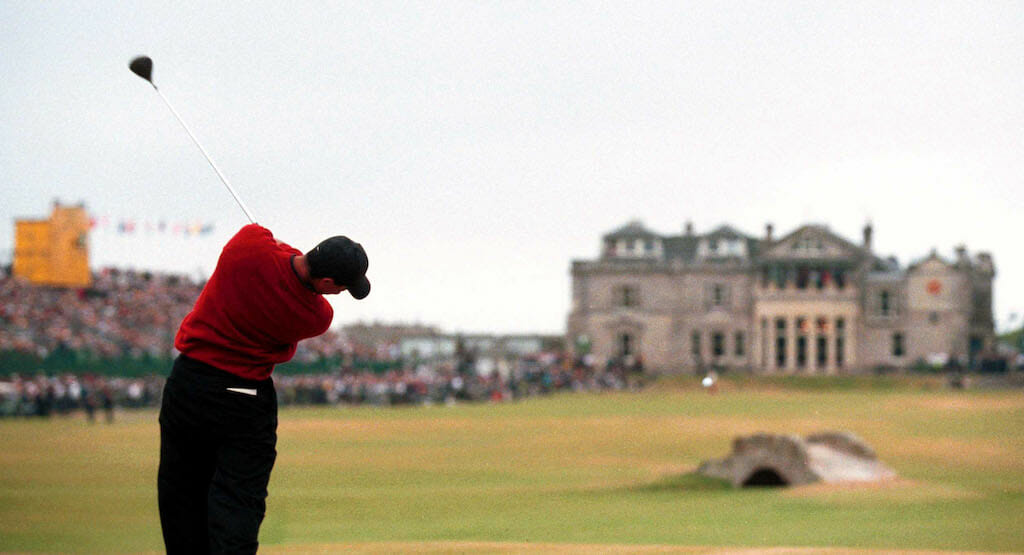 Tiger Woods drives off the 18th green on his way to a victory in the British Open Championships at the Old Course, St. Andrews, Scotland July 23, 2000. (Photo by Harry How/Allsport)

A field of 156 players will tee it up at St Andrews for The Open Championship, but all bar perhaps a dozen at most have any chance of taking home the Claret Jug.

On second thoughts, I might be a tad generous.

Come crunch time on the Sunday afternoon, maybe only two or three will have any realistic hope of getting the job done in the white heat of Championship battle.

And only one man will emerge from the fray having proved himself worthy of special honour that comes with victory in The Open at the Home of Golf.

The last nine holes, the last six holes, the last three holes on The Old Course will gradually weed out the pretenders to the Crown. And don’t be surprised if the Champion Golfer of the Year turns out to be the guy who leads, or co-leads, after 54 holes.

Since World War 2, The Open has been staged at St Andrews 14 times. On nine of those occasions, including two wins by Tiger Woods, the Champion held the lead after 54 holes.

Ironically, Jack Nicklaus who, in many golf fans’ opinion, shades TW as the Greatest Of All Time, not least because of his 18 Major titles, is one of four Claret Jug holders who had to come from behind on the closing 18 holes.

Sam Snead made the running in 1946, the first year The Open resumed after the War.

Snead completed his third round tied with fellow American Johnny Bulla and Dai Rees of Wales on 215, but showed his class in round four by shooting 75 to win by six shots.

Australia’s Peter Thomson held a two shot margin over the field on 209 after three rounds in 1955 and held on to retain his title, edging home two strokes ahead of England’s Johnny Fallon.

The third hosting of the post-War era by St Andrews came in 1957. Bobby Locke of South Africa upheld what was now a tradition – third round leader goes on the capture the prize and the glory. Locke filed a closing 70 to keep Peter Thomson at arm’s length by three shots.

Three years later, the 1960 winner, Kel Nagle from Australia  – yes, you’ve guessed it, he headed the field after three rounds – got safely home, albeit having to hold off a typical charge by the great Arnold Palmer for a one shot victory.

Next visit to the hallowed St Andrews turf for Open fans was in 1964 when “Champagne” Tony Lema of the USA bustled his way through 54 holes to lead the field.  The effervescent American thrilled the galleries by putting the pedal to the metal in round four, finishing the job five ahead of Jack Nicklaus.

Jack atoned for his 1964 lapse in 1970, albeit that he started the Sunday morning two behind pace-setting Lee Trevino. Need we say anything more than two words: “Doug Sanders.”

A putt from three feet to beat the Golden Bear over 72 holes… but Doug wrote himself into golfing immortality for the wrong reasons by missing the putt, and duly lost in a playoff.

Nicklaus came back to St Andrews in 1978 with his eyes on another Home of Golf triumph.

The Bear was hot on the heels of joint third round leaders Peter Oosterhuis and Tom Watson. He turned a one shot deficit into a winning margin of just two ahead of closest finishers Ben Crenshaw, Ray Floyd, Tom Kite and Simon Owen, all of whom tied for second place.

Seve Ballesteros. The 1984 Open. Who can forget the iconic images of the mercurial Spaniard punching the air again and again as he holed the winning putt?

Two behind leaders Ian Baker-Finch and Tom Watson at the start of the fourth round, Seve showed the courage and skill of a matador to skewer his rivals and end up on the right side of a two shot margin.

Britain finally had a post-War St Andrews champion in 1990 when Nick Faldo’s long-cherished dreams of raising the Claret Jug aloft in the Auld Grey Toon finally came true. Faldo had won at Muirfield in 1987 when he shot 18 pars in the last round to crush the opposition.

This one was very special. The Englishman led by five after three rounds and put the proverbial blinkers on to steadily work his way to win with five shots to spare at the end.

The 1995 champion John Daly had a tougher time. First, he had to come from four behind 54-hole leader Michael Campbell, and ultimately needed a playoff to get past Costantino Rocca of Italy who tied him in 72 holes with an outrageous putt from 60 feet.

Tiger Woods was unstoppable in 2000 and 2005. Leader after two rounds in Millennium Year, he became the fifth player in history to record a career Grand Slam, and this at age 24.

Woods was not flattered by the eight shots he finished ahead of his competitors. In ’05, a wire-to-wire winning performance confirmed the supremacy of Tiger.

The 2010 champion Louis Oosthuizen wasn’t too shabby either.  Leader after three rounds, King Louis stomped his class all over the venerable St Andrews turf, ending with a safety margin of seven strokes.

The weather-affected staging in 2015 required an extra day to complete.

Our own Paul Dunne, then an amateur, joined Jason Day and Louis Oosthuizen at the head of the leaderboard with 18 holes to play.

Zach Johnson of the USA lurked closely, three shots off the lead, but finished strongly on the Sunday to earn a playoff in which he defeated Marc Leishman of Australia and Oosthuizen.