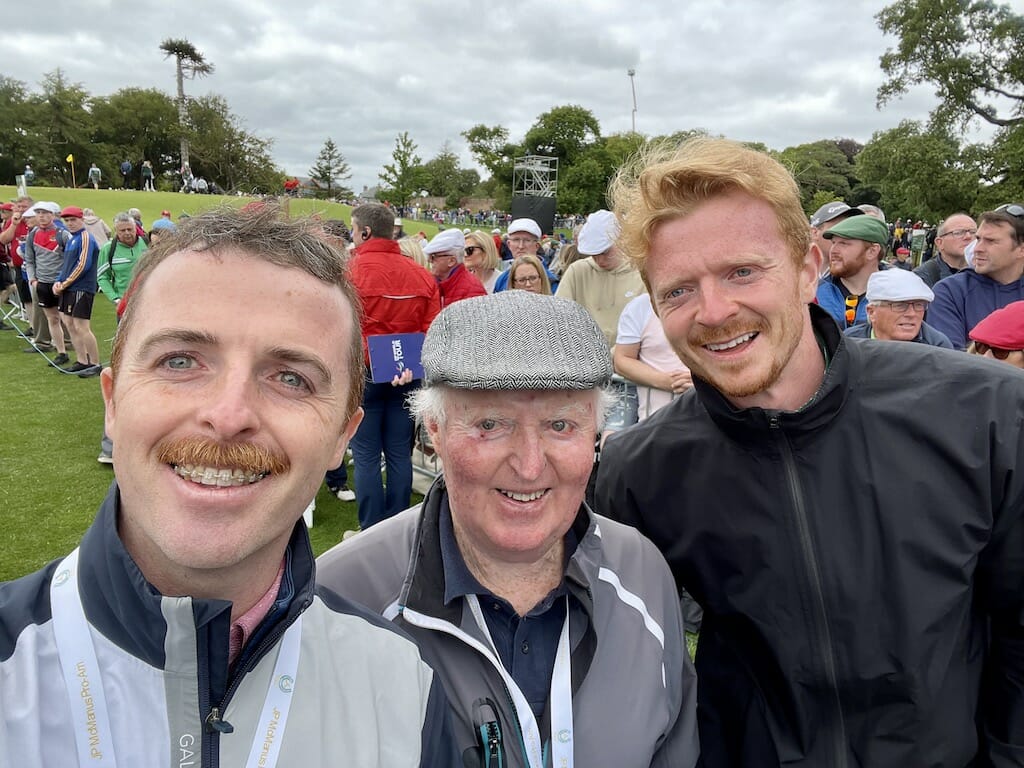 Your writer, the Lord and Ruaidhri the rogue at Adare Manor

Before I get accused of being unprofessional, which I most certainly am, it wasn’t meant to be another bring your dad to work day on Monday at the JP McManus Pro-Am. It just so happens that sometimes these things are beyond my control.

For the record, I’ll admit that we did travel together to Adare, carpooling our way down per environmental instruction as the golfers made their way by chopper and jet. But Dad had his red cap, and I had my media pass, so we parted ways upon entry, him with a free ice cream voucher to cash in, me with a laptop and a date with the media centre – my place of “work” for the day.

Security was on edge; my credentials inspected three times before finding my seat amongst the media, but it was fair enough given my arrival coincided with some fella called Tiger Woods.

Settled in amongst it, we were invited outside for the first official press conference of the morning – Senior U.S. Open champion Padraig Harrington ready to be quizzed. Broadcasters from near and far assembled for the interview. NBC. RTE. Respected journalists. Esteemed members of the press, but sure enough, I wasn’t the first Craven there.

Dad was front and centre.

Now I can’t know for certain how he evaded security but it sure as hell wasn’t his speed. More likely it was a case of mistaken identity, a common occurrence with Dad. Even last week at Mount Juliet, Harrington’s wife Caroline made a bee-line for him in the crowd and gave him a warm hug. “Great to see you,” she beamed, as if backing Padraig to win all three of his Major wins constituted such an embrace.

But these things happen with Dad. When I brought him along to the Irish Mid-Amateur at Thurles last year, a number of players thanked him for all the work he’d done for the GUI. He accepted their gratitude, despite never doing a thing for the union.

You see, Dad’s learned to go along for the ride. When his buddies in the local would be upstanding upon his arrival to the pub, he thought nothing of the guard of honour salute as he’d make his way to the bar for weeks on end. He certainly didn’t see the likeness between himself and President Michael D. when they eventually started serenading him with Amhrán na bhFiann.

So with Dad’s familiar features floating about Adare, security obviously decided that this 78-year old man shuffling his way into the media centre belonged, presidential or otherwise. And because he’d made it this far, we decided to have a free three course lunch to celebrate. “I didn’t like the queues in the tented village anyway,” he laughed. “Couldn’t even get my ice cream.”

Fed and watered, we went out to the putting green where it was a who’s who of stars from sport, stage and screen. Dad shook the world number one’s hand; not Scheffler’s, but Brendan Lawlor’s of course. He appeared on RTE news standing as tall as he’s able behind Shane Lowry’s interview and he was spotted trying his best to figure out his Samsung phone to take a photo of “his girl” Leona Maguire, a regular recipient of his €5 each way bet, only to be told that he was photographing Lisa, Leona’s sister and caddie.

Now the problem with finding yourself in a place you’re not meant to be is that once you leave, there might be no going back. Still, he’d travelled to Adare to watch some golf, so what better way to head to the course than alongside Rory McIlroy, lapping up the applause all the way to the first tee. 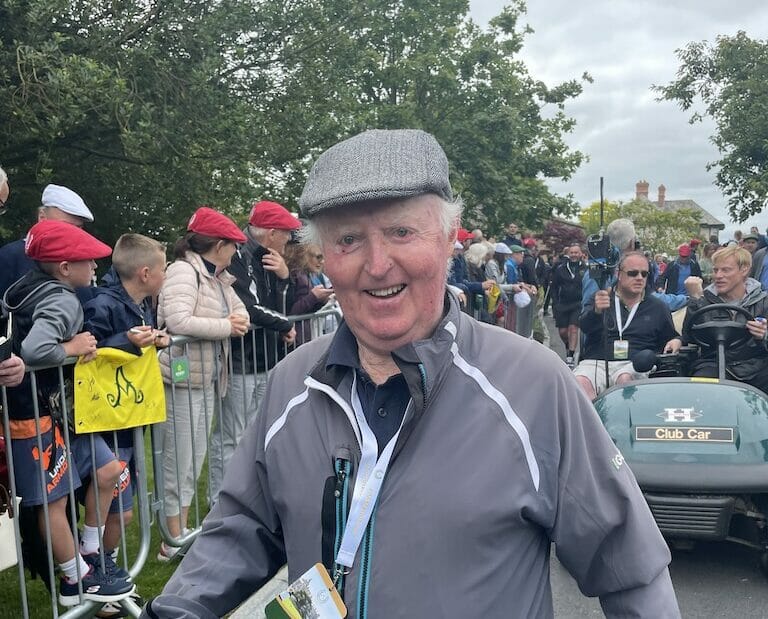 Dad lapping up the applause on the way to the first

Inside the ropes, we were rightly heckled by those who had waited to see McIlroy tee off with an unobstructed view. The galleries might’ve been in awe of Rory’s thunderous drive down the opening hole but I was in total amazement that Dad had managed to get back to his feet after sitting down on his haunches through Rory’s pre-shot routine. If it was Justin Thomas hitting, he might’ve been stuck there forever.

We joined the masses outside the ropes and made our way to the eighth to grab a vantage point to catch the many great players coming through. Bryson, Brooks, Morikawa, Spieth, Lowry, Rahm.. a relentless run of quality as we perched at their landing zone to scope out their approaches to the green.

Dad was content, if not a little spent, but I had one more ace up my sleeve… or on it, to be precise. I’d managed to get my hands on inside the ropes access as a member of the media and having loved the experience last week at Mount Juliet, I wanted Dad to experience it for a couple of holes. Better still, I wanted him to follow Tiger.

At first the old man was uncharacteristically reluctant. This is the same man who snuck into an Irish Open at Mount Juliet in 1993, through walls, bush and trees, despite having a ticket in his pocket. “Twas just for the devilment,” he told me.

But even to his devilish mind, this looked a step too far. The galleries following Woods were massive and Dad thought he’d stand out like a sore thumb. Or worse, he’d stand in the way of the Sky Sports cameras following the one they call GOAT.

As I urged Dad to take the armband of power, the 15-time Major winner pulled his approach left of the green, and as Woods ambled back into his buggy, I lifted the rope like I was helping an ageing wrestler into the ring for one last dance, and to my delight, Dad poured through it.

Now I can’t say I ever thought I’d see the old man sharing a fairway with Tiger Woods but if I did, there’s no way I would’ve pictured Woods being the one in need of the buggy! Dad marched down the right side of the fairway alongside Wayne ‘Radar’ Reilly and a few Limerick hurlers like he’d every right to be there.

And he did, in my mind at least, because he’s the reason I got into golf in the first place, while he’s also provided a fair bit of material for these articles that have tenuous links to journalism. It was the least I could do in return.

When I introduced Dad to Ivan Morris in the media centre, Ivan told him that he’d read plenty about him, but that he always pictured a decrepit old man, and yet here was Dad in the whole of his health.

And I’ll tell you, he didn’t look half bad scaling the uphill eighth alongside Woods. He even managed to side-step Tiger before getting mowed over on the way to the ninth green. The last thing we needed was another story involving an accident with Woods behind the wheel.

I followed the group up the ninth and while I got excited seeing Woods pull driver for a whack off the deck for his second shot, I was giddy seeing Dad standing behind him as if he was Butch Harmon back in the day overseeing his swing: “Ye lifted your head there, Tiger.” 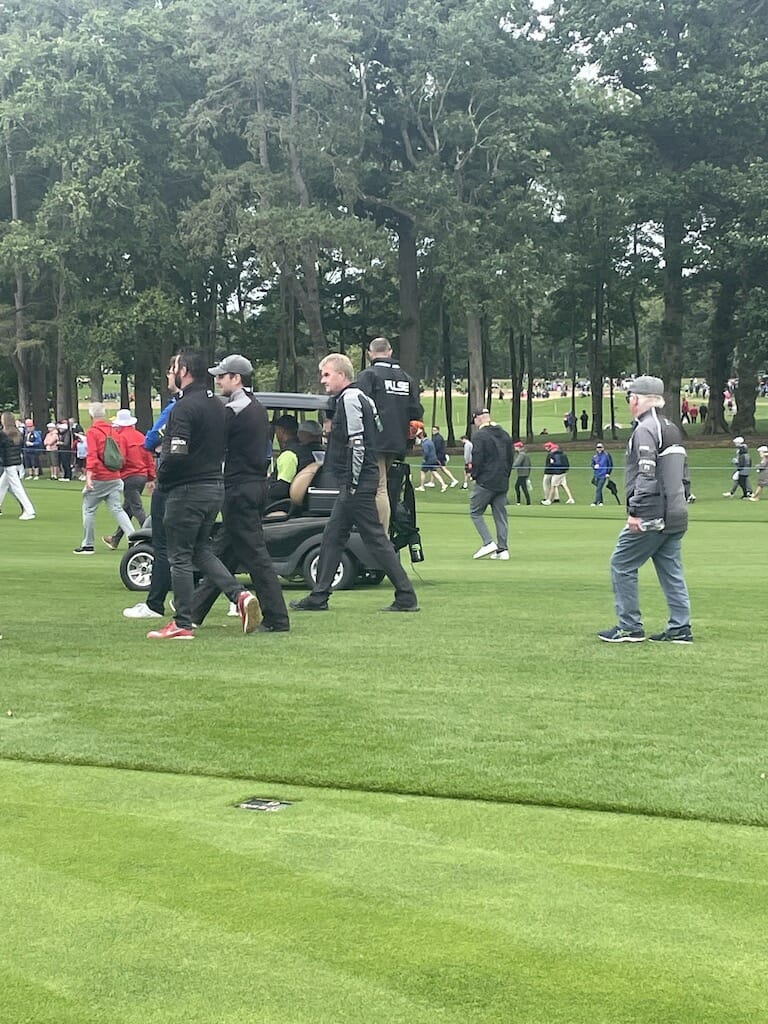 Dad in pursuit of Tiger

He bowed out before Woods made the turn, back to reality outside the magic rope.

“Did you have enough,” I asked him.

“I’m only good for nine holes these days,” he laughed, smiling ear to ear. “Besides, I still haven’t got that ice cream.”

The ice cream on the cake!