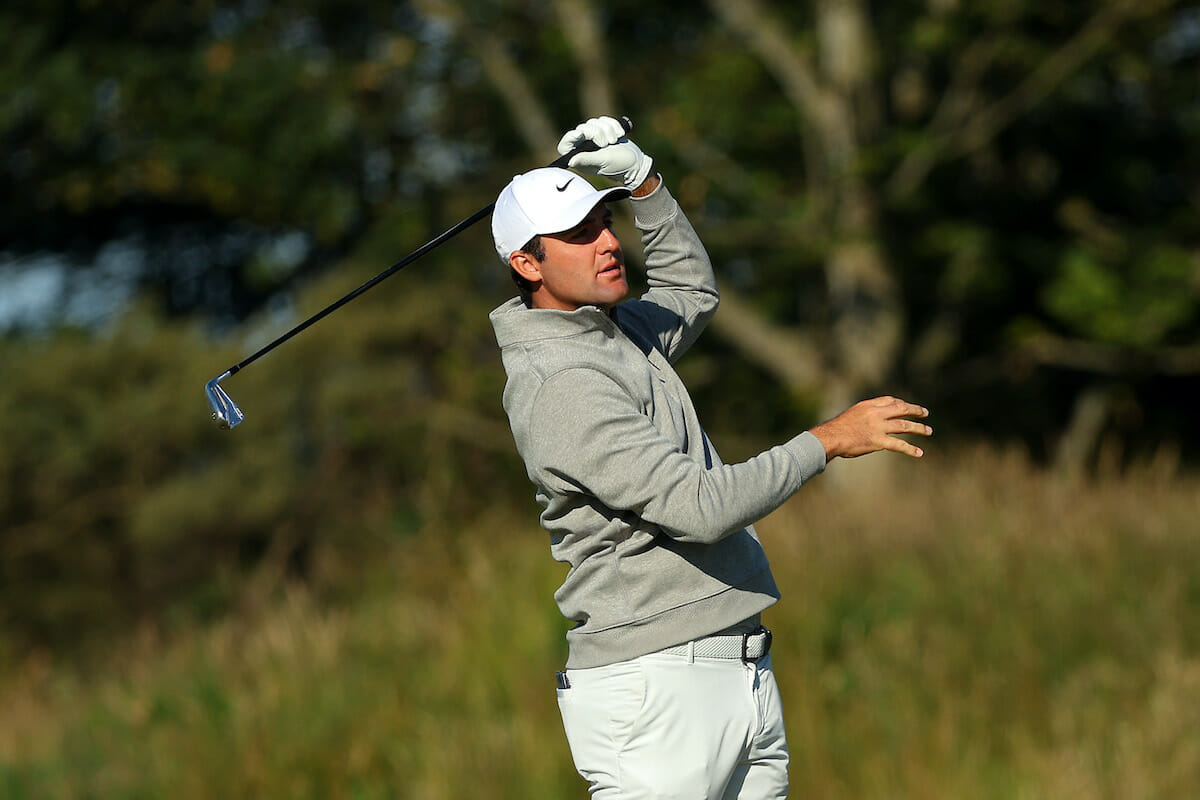 Scottie Scheffler of USA plays their second shot on the 10th during Day One of the Genesis Scottish Open at The Renaissance Club on July 07, 2022 in North Berwick, Scotland. (Photo by Kevin C. Cox/Getty Images)

Not only for double Open Champion Padraig Harrington but the St. Andrews pre-tournament preparations for a golf bag full of fellow major winners were blown off the course on day two of the Genesis Scottish Open near Gullane.

Defending Claret Jug winner Collin Morikawa along with fellow Open champions Francesco Molinari and Henrik Stenson plus World No.1 Scottie Scheffler along with his Augusta National green jacketed members in Danny Willett and Hideki Matsuyama also have to alter this Old Course plans with the weekend off ahead of the year’s final major.

Harrington, after a disappointing opening 74, continued to struggle in the bright but the mentally testing windy conditions, signing for a 76 for a 10-over-par tally. The last time Harrington was anywhere near that score was missing the cut in the 2019 PGA Championship with a 12-over tally at Bethpage Park.

The reigning US Senior Open winner managed just one birdie but also recorded five bogeys and a second double bogey over his two rounds.

You could argue Harrington’s a little golf weary following his maiden senior’s majors crown and then heading home to contest the Horizon Irish Open and the JP McManus Pro-Am.

However, how do we access the efforts of some of the current top-ranked players in the world, including Morikawa heading to the Old Course for the first time in his career looking to defend the oldest major in men’s golf?

Morikawa was driven out the front gates of the Renaissance club with scores of 71 and 74, and similar rounds as American whiz kid golfer Will Zalatoris and Aussie Marc Leishman, who lost in a play-off for the 2015 Open when last at St. Andrews.

Scheffler, with scores of 72 and 73, could manage just five birdies of his two rounds but then posted double the number of bogeys ahead of being asked what he felt he learned from his shortened two rounds.

“I definitely learned a lot”, he said. “I had some trouble kind of going into the greens playing the bounce and judging stuff like that, and you know, I felt like when I wanted — thought it was going to be firm when it was a little soft, and when I thought it was soft, it was a little firm. Got on the wrong side of things more often than not this week.

“Going into next week, if I clear up a few things with the putter, I’ll be ready to go”.

We go down the ‘board’ and Stenson was cut from the $US 8m event with rounds of 72 and 74, Matsuyama signing for scores of 73 and 74, Norwegian superstar Viktor Hovland posting rounds of 74 and 73, Keegan Bradley 72 and 77, LIV Golf’s Ian Poulter 78 and a better second round 72, reigning PGA Champ Justin Thomas and scores of 73 and 77 while Masters winning hero, Danny Willett also blown off the course with rounds of 77 and 73 for a 10-over, yes 10-over total.

Also shooting a 10-over 36-hole tally was Ireland’s Jonathan Caldwell after scores of 71 and 79.

No such concerns for American Cameron Tringale adding a second day two-over par 72 to maintain his three shot lead now at seven-under-par.

The good news also for the 34-year-old Californian is that the players who have enjoyed a three-shot lead or more after two rounds on this year’s wrap-around PGA Tour schedule have gone on to win the tournament.

Four players – the Americans Kurt Kitayama (71) and Xander Schauffele (65) along with the England duo of reigning US Open winner Matt Fitzpatrick (66) and Jordan Smith (69) share fourth at three-under.

Schauffele’s round of 65 was easily the lowest on day two, and on a day when the average round was 72.42.

As such, the 18th at the Scottish Open has now replaced the 18th at TPC Sawgrass as the hardest this year with the last hole at the annual host venue for the Players Championship earlier this year playing to 4.53 strokes.

Jonny Caldwell also had a day to forget as he carded a 79 to miss the cut by seven.