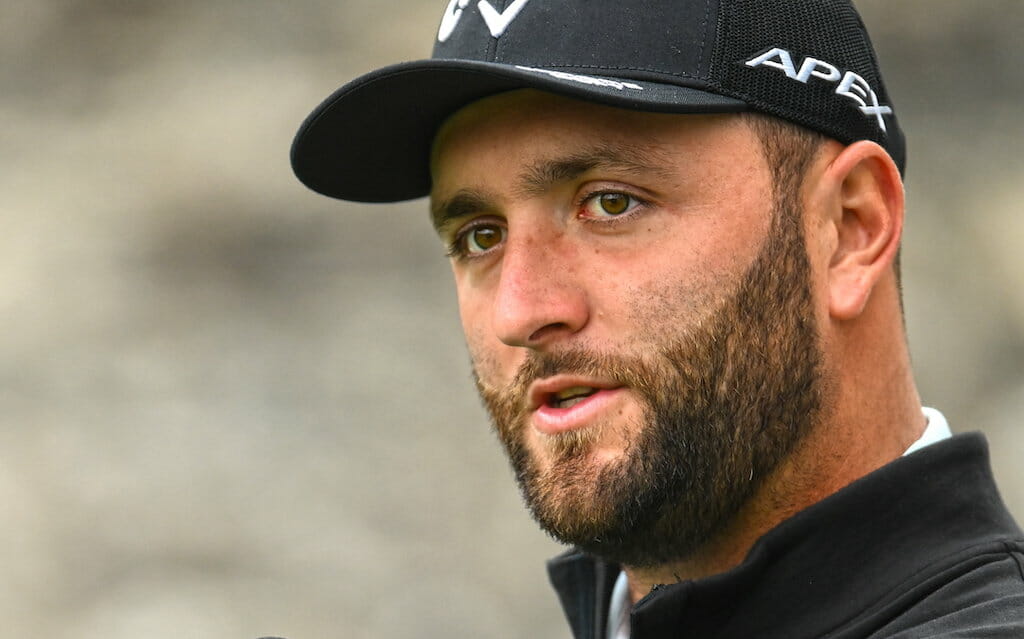 Jon Rahm during a press conference on day two of the JP McManus Pro-Am at Adare Manor Golf Club in Adare, Limerick. (Photo By Ramsey Cardy/Sportsfile via Getty Images)

Jon Rahm feels that JP McManus and the course staff at Adare Manor will need to “de-Americanise” the golf course to suit the European team when the 2027 Ryder Cup arrives.

The Spaniard, who has made two appearances in the biennial contest, said that the golf course is in immaculate condition and while he is a massive fan of the layout, he believes in its current state, it would play into team USA’s hands in five years’ time.

“Fazio has done an amazing redesign of the golf course,” said the world number 3. “It’s beautiful and this golf course can be made as easy as they want and as hard as they want, right. It’s the beauty of a good challenge.

“The course is in fantastic shape. We don’t really see golf courses like this throughout the year, truly impressive and for how much traffic they got yesterday, it still held up. It’s not only beautiful to look at, it plays great. That’s the beautiful aspect of it. The greens are tricky. There’s a lot of run-offs but it’s still fair.

“So it’s really, really enjoyable. They have done an amazing job and the superintendent [Alan MacDonnell] should be happy because this is something that we don’t see every day.

“Now with that said, for a European possibly in that Ryder Cup, they might need to spend a lot of time and resources on de-Americanising the golf course. Because right now, it would be pretty much what you would expect in a Ryder Cup in the US. Based on what I saw in Paris and what I’ve seen in other venues, Ryder Cup in Europe is a little different. They might spend some time and effort to do that obviously to suit our strength,” added the former world number one.

Rahm has become a darling among Irish fans after two fabulous Irish Open victories in three years in 2017 and 2019 and he expects an enormous crowd to swarm through the turnstiles in 2027, creating an atmosphere that could turn the tide in Europe’s favour even if the setup of the golf course isn’t altered.

“But we’ll see. Otherwise we will have the Irish crowd, core of the crowd being Irish, supporting the European team, and we all know how the Irish can create a good after and a good time, and it will be really, really fun.

“All depends on how many people they are allowed to host. They can host as many as they want. They have the ability. Like I just said, I think from the times I’ve played the Irish Open, the Irish crowd is really, really unique. They understand the game of golf and they are thankful and their joy is infectious, you can see it here, you can see it at the Irish Open.

“They show up even if it’s 40 degrees and blowing sideways and raining. I remember watching on TV an Irish Open in Portrush where the weather was awful and 100,000 people turned out for the week. Hopefully for The Ryder Cup where the weather is okay and you can expect a lot of people wanting to come and the atmosphere being quite electric.”

On the Irish Open itself, Rahm was unable to defend the title he won in Lahinch three years ago due to COVID and subsequently hasn’t played competitively on Irish soil since. However, he intends to return and put his name alongside some legendary figures to win a hat trick of Irish Opens including Seve Ballesteros, Nick Faldo and Colin Montgomerie.

“I love playing in Ireland. I will be back some day,” said Rahm before his second round at the JP McManus Pro-Am.