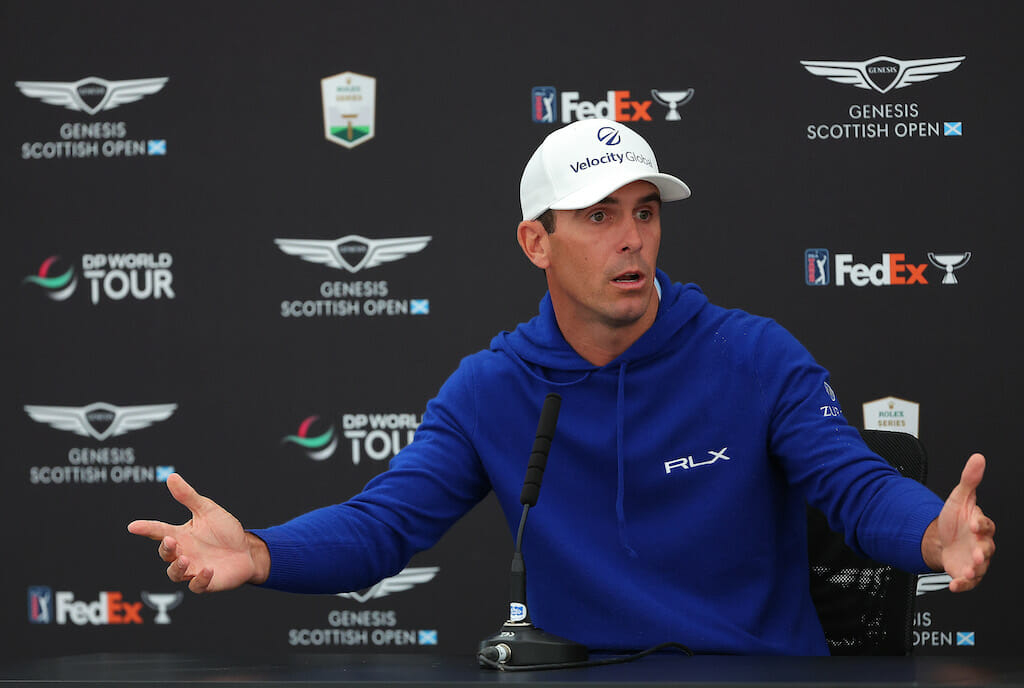 Billy Horschel speaks during a press conference prior to the Genesis Scottish Open at The Renaissance Club on July 05, 2022 in North Berwick, Scotland. (Photo by Kevin C. Cox/Getty Images)

American Billy Horschel has launched a scathing attack on the LIV Golf defectors, declaring the rebellious golfers to be hypocrites, liars, and demanding they cease their criticism of those loyal to the PGA Tour.

Horschel, 35, is a member of the Players Advisory Committee and the reigning BMW PGA and Memorial champion’s remarks are the sternest to be heard from a player of his stature, who has chosen to remain true to the PGA Tour.

The Ponte Vedra-based Horschel was on the official interview list Tuesday ahead of this week’s historic Genesis Scottish Open, again being staged on the Renaissance course to the east of Edinburgh.

And after the ‘Welcome to the Genesis Scottish Open’ opening comment, it was as though Horschel couldn’t wait to fire both barrels at his former PGA Tour colleagues who have jumped ship for the riches of LIV Golf.

Horschel’s comments easily are the harshest to be directed at LIV Golf, and easily stronger in his condemnation than the likes of PGA Tour Commissioner Jay Monahan and DP World CEO Keith Pelley put together.

And from a PGA Tour player perspective, harsher than Rory McIlroy, Justin Thomas, Scottie Scheffler and others combined.

“I believe they made their bed,” said Horschel when asked his reaction to recent developments.

“They (LIV Golf) decided to go on a tour and they should go play that tour. They shouldn’t be coming back over here to play the DP World Tour or the PGA TOUR. To say that they wanted to also support this tour or the DP or PGA TOUR going forward, while playing the LIV Tour, is completely asinine in my opinion.

“To play the PGA TOUR, you’ve got to play 15 events and their schedule is 8 events, 14; so to say they are going to play 29 events a year and still hold membership on the PGA TOUR is ridiculous.

“I know it’s easy on the DP World Tour where you only have to play four events a year outside the majors and WGC events. But my sitting here, being able to talk to the DP World Tour players over the last couple years, having a conversation with them at the BMW International Open.

“Obviously, there’s a multitude of reasons for it but these guys deserve the same set of rewards over here that we get on the PGA TOUR. So it’s unfortunate that those guys made their bed and that’s what they want to do.

“Leave us alone, honestly. They keep talking about PGA TOUR doesn’t listen to them — I’m carrying on to your question because this is something — the last week’s events I’ve been really frustrated by because there are a lot of guys that are hypocrites that are not telling the truth and lying about some things that I just can’t stand to sit here anymore and be diplomatic about it as I have been in the past.

“So, it’s ridiculous to hear some of the comments these guys make, saying, well, this allows me to play less tournaments. I play 30, 35 weeks a year. No one’s forced you to play that many events. PGA TOUR says 15 events minimum, all you have to do is play 15 events and you keep your card in those 15 events then that’s fine. If you want to play better or you want to play more so you get a chance to win the FedExCup, so be it. So be it. No one has made you play that first Playoff event to go miss family obligations. No one has.”

Horschel cited his own personal situation with this week being a fourth week ‘on the road’ competing, while it will be five weeks away from his wife and family by the time he returns home to Florida post next week’s Open across the Firth of Forth in St. Andrews.

“Yes, we are independent contractors; we do sign a contract with the PGA TOUR to meet certain requirements of the PGA TOUR,” he said.

“But we have the opportunity to make our schedule so to say that we have to play X amount of events and they don’t have time off, no one makes you.

“I’m on the road for five weeks. I have not seen my family for three weeks. I haven’t seen them for the last three weeks: U.S. Open, didn’t see them in Germany, I stayed over here in London for a week, I’m staying over this week and I’m staying for next week, so five weeks. That’s what my wife and I decided, when we laid our schedule out, it just worked that way.

“I made that decision to not see my wife and kids for five weeks. Am I crying about it? No. I understand. I’m living my dream trying to play golf professionally and support my family financially.

“So, I’m just tired of these comments. Like go play the LIV Tour and forget about the PGA TOUR. Maybe they don’t want to support the PGA TOUR going forward. Don’t tell me you’re going to play LIV and then go play 15 events on the PGA TOUR and playing 20. That’s not a small schedule, that’s not playing less.”

However, Horschel was asked by Irish Golfer Magazine of the bigger picture reward this week and that being the winner, should he be a non-PGA Tour member, earning full PGA Tour membership.

“I don’t know what the exact word is, no longer alliance; the bond. But like I said, the appeal for someone on The European Tour that doesn’t have a PGA TOUR card, they probably grew up wanting to be part of the DP World Tour and when they got out here, not that this tour is lacking in any way with competitiveness or anything, but you’ve seen the move to the purpose and you want to compare yourself to the best players in the world, PGA TOUR is where you want to go.

“Not every DP World Tour thinks that way. They love it over here but some guys want to go over there and try their craft out on the PGA TOUR. For someone who has that desire, that’s a special moment for them knowing they have a chance to come over on the PGA TOUR and compete at the highest level.”

And Horschel remembers clearly his ‘special moment’ some 13 year ago.

“I was a little bit cocky, and I knew I was going to get my card that week so I just sort of — I’m not a big guy that celebrates or takes it in or gets real emotional about things like that. But looking back now, I’ve been on the PGA TOUR for 13 years. It was an unbelievable time to be able to fulfil my dream of making it on to the PGA TOUR.”