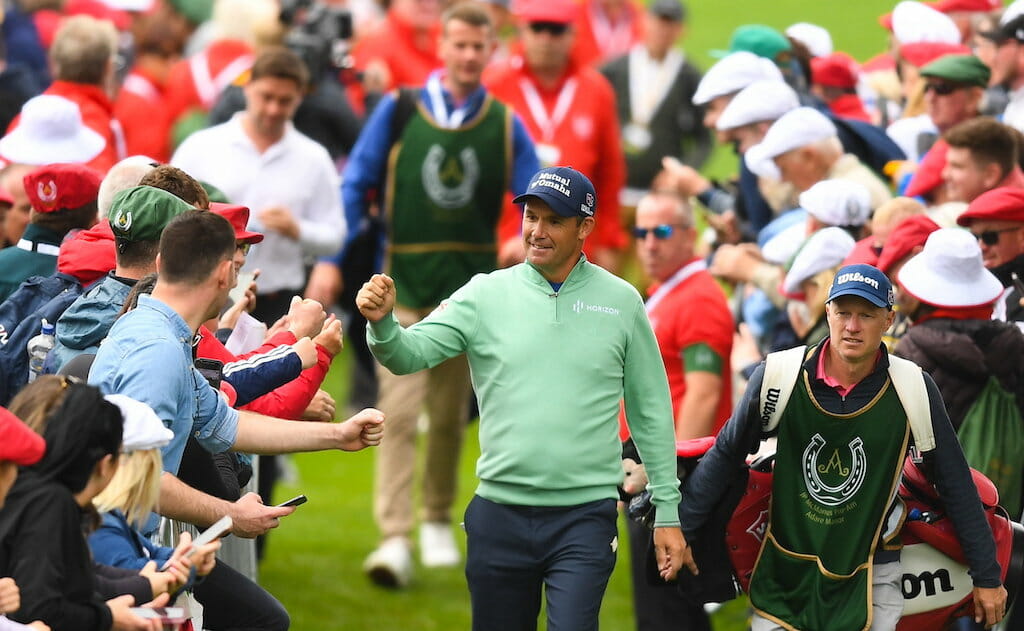 Padraig Harrington walks to the 10th tee during day one of the JP McManus Pro-Am at Adare Manor Golf Club in Adare, Limerick. (Photo By Eóin Noonan/Sportsfile via Getty Images)

50-year old Pádraig Harrington believes his age is no barrier to the possibility of adding a third Claret Jug to his trophy cabinet next week at the 150th Open Championship at St Andrews.

The three-time Major winner, who added a fourth major title from the over-50’s bracket at the U.S. Senior Open already this month, is looking to follow in the footsteps of last year’s U.S. PGA champion Phil Mickelson, who became the oldest Major champion at 50 with his win at Kiawah Island.

And speaking from the JP McManus Pro-am at Adare Manor, Harrington had no doubt that his hunt for a third Open title was within the realms of possibility ahead of his return to the Home of Golf.

“Tom Watson proved that it’s certainly possible,” Harrington said, referring to the legendary American who missed an 8-foot putt to win The Open at Turnberry aged 59.

“I’m sure there’s been others. Phil has done it. Obviously when it comes to a links golf course, it’s even more of a chance at St Andrews.

“Yeah, look, I don’t see myself, or I don’t have a barrier of 50 years of age. In my head the only barrier I have to winning tournaments is a little bit of nerves, how I manage my mental side. So it’s not a physical side that’s an issue.

It’s certainly not backs to the wall stuff for Harrington this week in Adare where he opened with a two-over par 74 on a tough opening day in Limerick. Yet, whatever about the challenge on the course, it’s been anything but testing off the fairway at the stunning Manor that’s been setting the world alight on TV broadcasts around the world.

“The best way of me describing this golf course is, I could turn around to my wife and say ‘look, I’m going playing golf’ and my wife will go, ‘Yeah, fine’,” Harrington explained.

“If I turn around and go and say, ‘I’m going to play golf at Adare’, my wife will say, ‘Yeah, I’m coming!’ It’s the best venue in the world as far as I’m concerned.”

Harrington was asked to explain the pull of JP McManus, the tournament host who’s managed to attract a field the envy of most tournaments around the world… for a two-day Pro-Am in Ireland.

“JP, and his extended friends. There’s a few others involved. If you support JP, he’ll support you for the rest of your life in your charitable endeavours,” Harrington said.

“I have a Paddy Harrington Scholarship to Maynooth University has put 174 kids through scholarships, and that’s fully funded by JP.

“He supports charities all around, and if players support him, he’ll be there for them and plus, if you become a friend to JP, which these players will, there’s very few people, professional golfers, can reach out to and talk to and look for advice from.

“JP, as I said, there’s others whether it’s Joe Lewis, Derrick Smith, Michael Tabor, they are all there involved in the golfing community. These are people that golfers, you know, when they are looking for advice in the world, they can reach out to these people. These are friends that will help them out.”

With the Ryder Cup returning to Adare Manor in 2027, last year’s European Captain Harrington has no doubt that the Limerick venue will prove a massive hit for the biennial contest, from the course, to the infrastructure around it, to the town of Adare itself.

“I think the biggest key is the fact that the locality here, the people of Limerick have taken ownership of Adare Manor,” Harrington added.

“As much as JP is the actual owner, the people of the community have genuinely taken ownership and they will make sure there will be no stone unturned to make sure The Ryder Cup in 2027 is a success for everybody who comes here.

“Look, obviously the European Tour and JP can look after the players and the people on site, but it’s the community that will look after the guests that come into the country.”