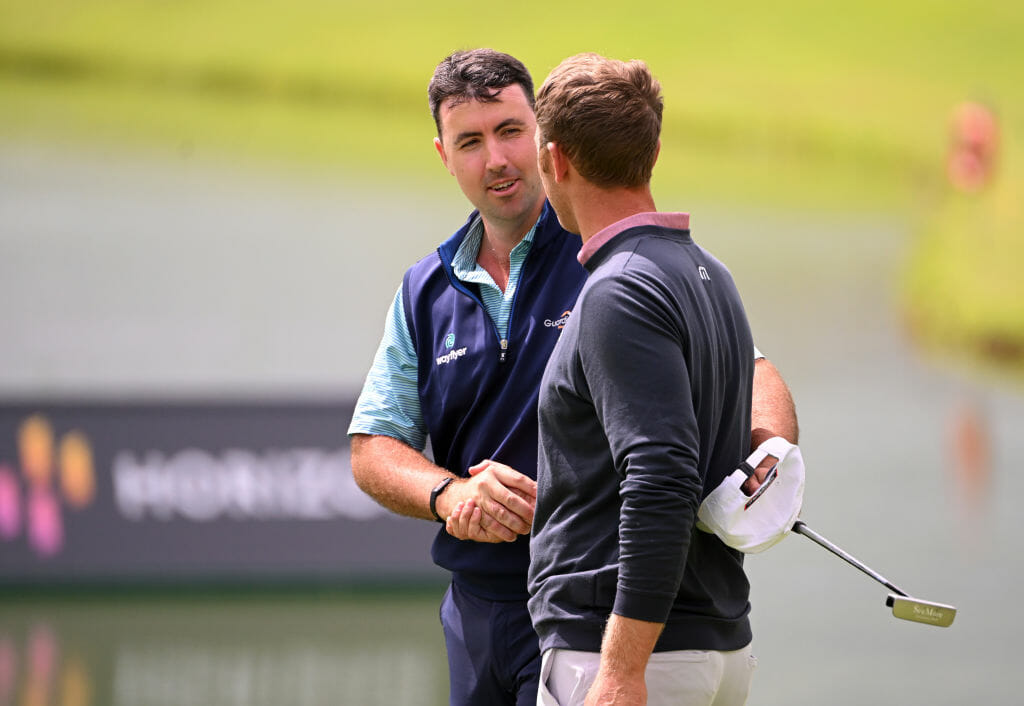 Seamus Power and Niall Kearney both enjoyed solid final days at the Horizon Irish Open after they were paired together in one of the early groups at 7.53 am.

Power shot a four-under 68 while Kearney shot a 70 and they moved to seven and four-under respectively.

For Power the final round in Mount Juliet served as a momentum building purpose after a disappointing third round where he fell out of contention. He was delighted to end his first Irish Open in three years on a high note.

“It was one of the more enjoyable tournaments I ever played,” he smiled. “It was nice to get momentum back today.

“I hit a lot more fairways and didn’t miss many greens. The rough is quite thick so things can get difficult from there, the greens are soft so when you hit the fairway you can take advantage.”

The Waterford native carded sixteen birdies and an eagle in the 72 holes and while he leaves Kilkenny pleased with where his game is at, there is a niggling feeling that this year’s Irish Open is one that got away, particularly on the par-fives.

“It was. Even in the first couple of rounds I had a couple of sixes coming in. I birdied seventeen once, I played the fifth in even so you are leaving four or five shots behind there. That’s sometimes a week, you try do the best you can but I left a few shots out there.”

All roads lead to the Open Championship, via the JP McManus Pro-Am in Adare Manor and Power will ramp up his Open preparation by playing in Royal County Down for the first time before boarding a ferry next Sunday evening.

The Tooraneena man has made three cuts in his first three major championship appearances of his career, including a top-10 at the PGA Championship and he believes his game is good enough to win the Open Championship at the Home of Golf in two weeks time.

“St Andrews is so unique. Playing my first Open there it’s going to be an amazing week,” said Power who teed it up at the Old Course in the St Andrews Links Trophy as an amateur.

“There’s going to be massive crowds like there was in Brookline, Augusta and Oklahoma so you get used to that sort of thing. The Open will be different but I have confidence knowing my game has held up in the toughest conditions I am going in there with a lot of confidence.

“I feel very good with my game it’s an unusual set up because my miss is normally right which doesn’t fit up there pretty good but there’s a lot of ways to play golf!”

Meanwhile his playing partner Kearney continued his fine form on the DP World Tour as he took advantage of another important start.

The Dubliner has made seven cuts in his last seven tour starts as he looks to earn full playing privileges for next season. At 158th in the race to Dubai rankings, Kearney has a bundle of opportunities coming up in the English swing in which he can make serious inroads in the season-long standings.

“It’s been a positive week, another cut made,” said Kearney. “Slightly disappointing weekend, three-under through five yesterday and today and just didn’t drive it on. Played pretty well just didn’t score on the back nine.

“I just have to keep going, once I get the starts just play the same way and see if I can get myself up the Race to Dubai rankings.

“Keep working on weakness and practicing with my coaching team, this week my weakness was not being able to kick on after getting off to such a great start. I’m hitting a lot of greens in regulation, just didn’t get many putts today even though I feel like I putted quite well. It’s marginal.”

It was an enjoyable day for the Royal Dublin golfer having roomed with Power in Tennessee during their youth and he was impressed by the 35-year-old who has been on a journey not too dissimilar to himself.

“It was like being back in a GUI competition, the atmosphere was great and kept both of us going.