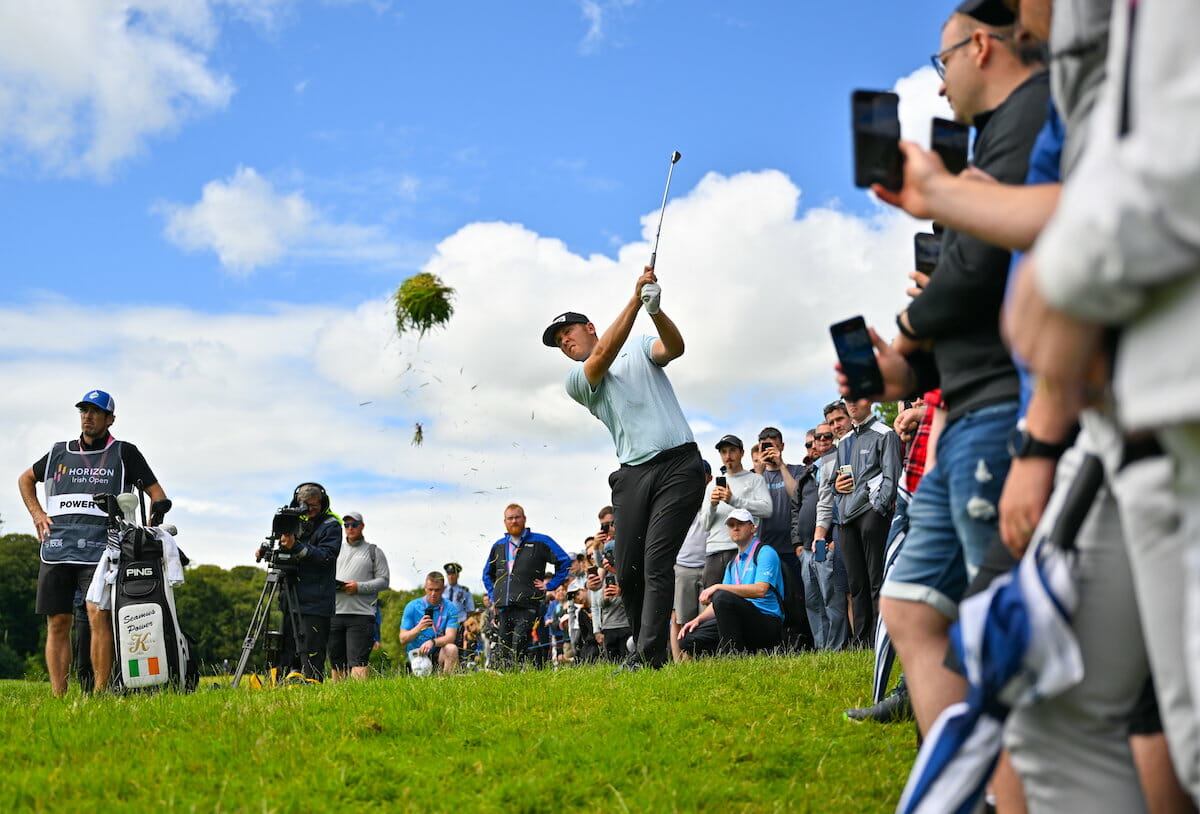 Seamus Power of Ireland plays his second shot from the rough on the 13th hole during day three of the Horizon Irish Open Golf Championship at Mount Juliet Golf Club in Thomastown, Kilkenny. (Photo By Eóin Noonan/Sportsfile via Getty Images)

Seamus Power’s Horizon Irish Open challenge fell flat on its face after a thoroughly disappointing third round of 77 saw him tumble down the leaderboard in Mount Juliet.

Power teed off just three off the halfway pace set by Jorge Campillo but he is a distant eleven strokes adrift new leader Adrian Meronk on three-under.

Things went awry for the Waterford native before he teed off after his third round was delayed by approximately fifteen minutes due to a medical emergency in the crowd thus putting he and Jack Senior on the clock from the start.

It knocked Power off his stride and he was unable to get that quick start he so dearly craved after posting bogeys on the third and ninth to turn in 38.

“It put us out of our rhythm a little bit but you have to learn to deal with that, it’s part of the game you have a set amount of time to get around. No excuses it was just one of those days where everything was poor, lots of bad swings.

“I had a good first couple of holes then just loose shots all over the place. Disappointing but go out tomorrow and see what happens.

“I felt comfortable out there I just hit some very poor shots. The third with a back right pin to hit it in the water is unheard of out there today. That’s golf I supppose just got a little out of focus there at the start and wasn’t able to recover,” added the Tooraneena native.

Things didn’t improve for the 35-year-old as he bogeyed the par-5 10th although he did raise a cheer with his only birdie of the day on 13 which brought a glimmer of hope.

Faint hopes of a Lowry-esque finish were soon dashed as he dropped three shots in his next two holes after a bogey and a double on 15 but he did come home with three successive pars.

It is almost a year to the day since the 2016 Olympian broke through on the PGA Tour at the Barbasol Championship and being in the final few groups at the weekend of an Irish Open was a completely new experience for Power given the context of his career but he refused to be drawn on expectations weighing him down today.

“You wouldn’t want it to happen at an Irish Open but sometimes it does. It was just one of those days that happens a couple of times in a season that you would rather happen when you are 60th but it happens every now and then just got to tighten up some things for tomorrow.

“Tomorrow I’ll go back to simple things and try post the lowest score of the week and see what happens and get some momentum going into the Open.”

A sell-out crowd burst through the gates on Saturday and another capacity crowd is set to battle the showers and the following sunburn and there will be a popular early group with Power paired with Niall Kearney at 7.53 am tomorrow.

Four birdies in his last six holes helped Poland’s Meronk to the top of the leaderboard on fourteen-under as he put himself in another position to notch his maiden DP World Tour win.

The 29-year-old has been knocking on the door of late with four top-6 finishes in his last six starts and a third round 68 has him one ahead of Senior, Fabrizio Zanotti and Jorge Campillo.

It has been a great year for Meronk who became the first Polish golfer to break into the world’s top-100 after a third place finish at the Dutch Open and he can really announce himself as one of the top players on the DP World Tour with a potentially career-changing win on Sunday.

2020 champion John Catlin is looking for two titles in three years from two behind on –12. It has been a disappointing season until now for the American who is without a top-10 on the DP World Tour this season however a return to Ireland has certainly brought out the best in him and a relative home comfort.

“My coach is actually part-Irish as well and this is his first time coming over here to the DP World Tour so it would be extra special,” explained Catlin. “Winning it in 2020 was awesome, he loved that, so hopefully we can do it again. It’s nice having him here, he’s definitely kept me calm and we’ve been able to put some good work in and it’s paying off. Looking forward to tomorrow.

“The Irish fans are second to none. We’ve had some on and off weather and they’ve stuck by us through and through. You come down the last hole and I tried not to look at the gallery so I don’t know exactly how many people were there but I would guess thousands. It’s fun to play in front of them and feed off them. Every time you hit a good shot you’re looking at the gallery and trying to see how they liked it.”

Catlin is alongside Norwegian Espen Kofstad while defending champion Lucas Herbert is a shot further back on eleven-under after a 68.

Shane Lowry, Harrington and Kearney completed their third rounds long before the final groups teed off with Lowry moving to within seven of the lead with a four-under 68.

Harrington and Kearney both got in the house at four and two under after rounds of 71 and 72 respectively.