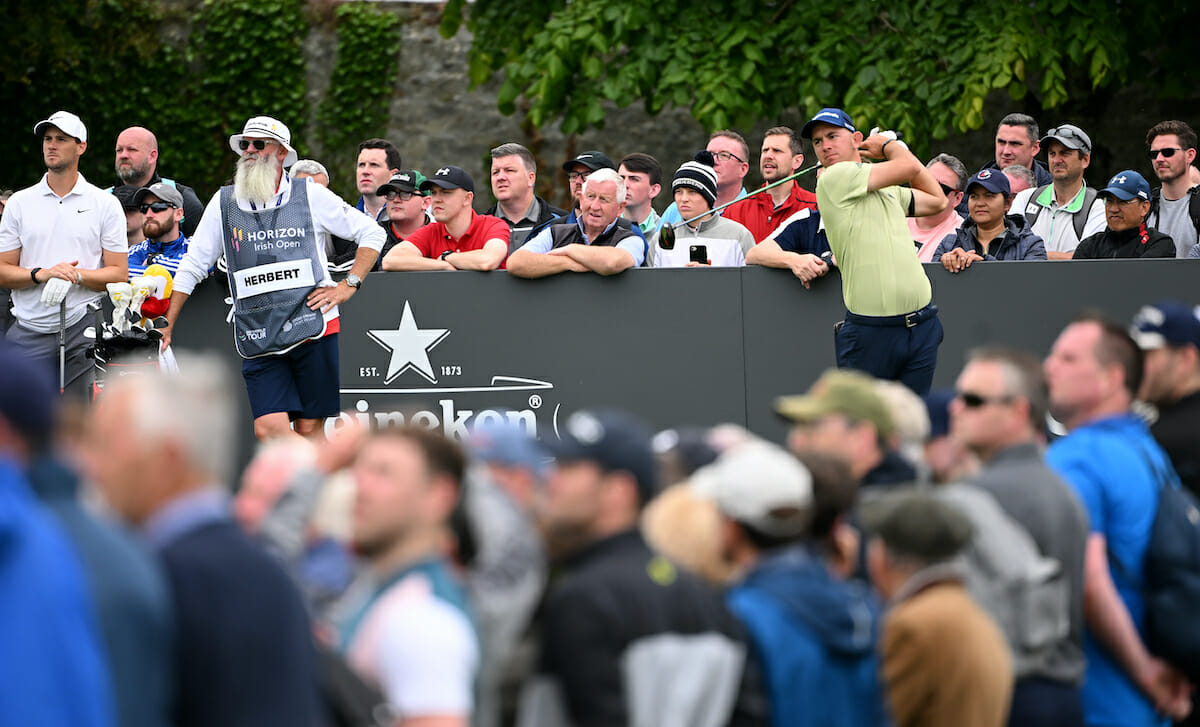 Lucas Herbert tees off on the 10th hole during the first round of the Horizon Irish Open at Mount Juliet Estate on June 30, 2022 in Thomastown, Ireland. (Photo by Ross Kinnaird/Getty Images)

Lucas Herbert can consider Mount Juliet his second home after he pushed himself into contention to become the first player to defend an Horizon Irish Open title since Colin Montgomerie in 1997.

The Aussie posted a third round of 68 to climb to eleven-under and three shy of talented Pole Adrian Meronk.

The defending Irish Open champion had grabbed a share of the lead with a birdie on 17 but dropped his only shot of the day on the last which could be costly.

“I would have liked to get a little more out of the round I felt like I played a bit better than the score reflects but we are in a good position going into tomorrow and there’s no reason we can’t defend our title,” said the two-time DP World Tour winner.

“I seem to like it here I don’t know what it is maybe it’s something in the water.”

Herbert teed off four off the pace but put together an early charge with birdies on the second, fourth and eighth before a sensational birdie on the par-5 10th.

The Australian pushed his second shot miles right, missing the greenside bunker and rolling all the way down towards the out of bounds bushes only to find a sliver of grass beside a fence guarding a workyard.

Having bizzarely asked for the door to the yard to be opened so he could take relief from casual water, his request was turned down but he managed to drop with enough space to take a swing at. his pitch.

Seemingly struggling for a par off the marshy lie, the 26-year-old produced arguably the shot of the week and rolled in a five-footer for the most unlikely of birdies.

“Hopefully nobody puts a plaque where I hit it because it was way right. I was asking if we could open the gate and I got very lucky to just have enough of the corner to have a swing and got lucky with how it came out and fortunately got it up around the green and holed the putt!”

Herbert has had the bulk of the home crowd roaring him on having played with Pádraig Harrington in the opening two rounds but despite Seamus Power drawing the majority of the home faithful, the man from down under was delighted to still attract a sizeable following and while it is clear he has a special place in Irish hearts, the feeling is mutual.

“I feel like an adopted Irishman I have had a lot of support for an international. I played the first two rounds with Pádraig and that was pretty incredible and he was pulling some massive crowds and got so much support so it was pretty cool to have that today as well.

“I had a pretty decent crowd today so very happy to get that support and it feels like everyone is pretty vocal and gets behind me which is very cool.’

Herbert broke through for his maiden PGA Tour win at the Bermuda Championship last year making it three worldwide wins in two years and he has been a regular fixture in the world’s top-50.

The world number 48 is looking to take the next step in his career and become a regular contender in the biggest events including the majors after achieving the highest major finish in his career to date with a 13th place at the PGA Championship in Southern Hills.

“I want to keep contending in the biggest events and I want to come back here and win some of our bigger events on the DP World Tour aswell. I feel in the majors it’s where everyone wants to put their attention I want to figure out how to best contend in them and feel like I am playing a part in those. I had some success at the PGA which was a pretty good feeling and I want to continue to do that.

“I love St Andrews I was extremely happy when I found out last year that I was exempt to play the Open there because it has been on my radar for a number of years so I am very happy to be going back to the Home of Golf to play the Open.”