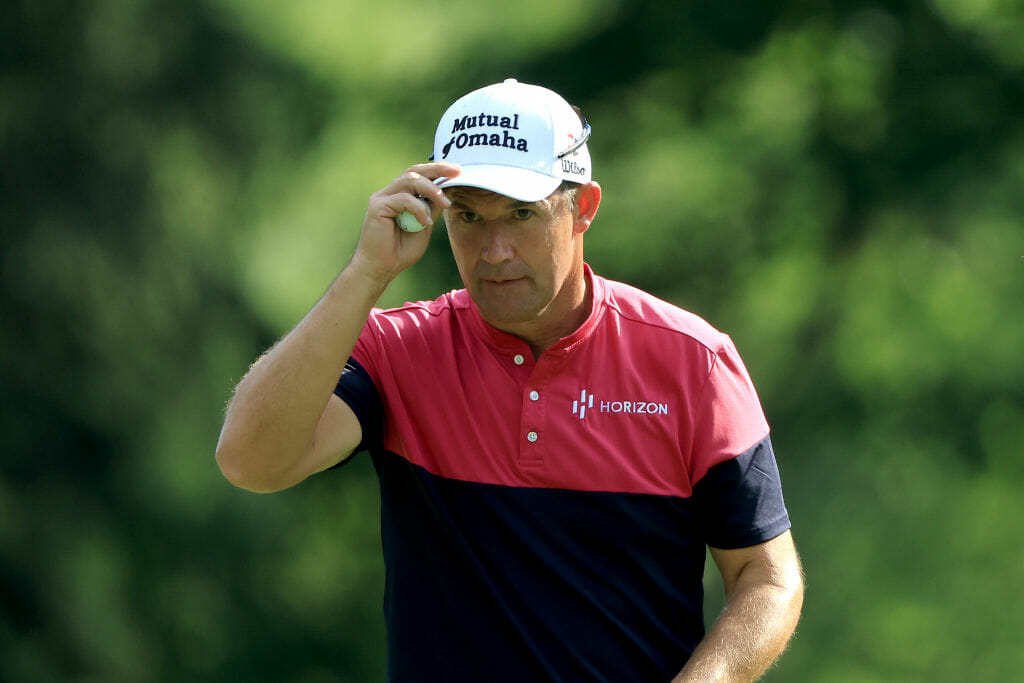 Padraig Harrington acknowledges the crowd on the fifth hole during the second round of the U.S. Senior Open Championship at Saucon Valley Country Club (Photo by Sam Greenwood/Getty Images)

Pádraig Harrington rolled back the years as he shot a bogey-free round of 65 to take the halfway lead at the US Senior’s Open in Saucon Valley.

Harrington, making his debut in this event, holds a one-stroke lead over Steve Stricker and the pair will go head to head on Saturday in the final group with the Dubliner looking to avenge a record-breaking Ryder Cup defeat at the hands of Stricker’s US charges.

The 50-year-old was pleased with his performance over the two days and while he has been surprised by the difficulty of the golf course he feels it plays to his strenghts.

“I played really well yesterday, creating an awful lot of chances. I was happy with the level par even though it could have been a lot lower,” said Harrington who finished his second round with three birdies in six holes to leapfrog Stricker.

“It’s a much stronger test than I expected. This is way, way tougher than our regular Champions Tour events. I knew this was a big advantage to me starting the week, both length-wise and being able to play from the rough if I am in the rough.

“Certainly this is a real strong test. This is a big golf course, well set up. I know it’s gotten a little soft, so the scoring is better because of that. Certainly I’m very impressed with the USGA,” added the three-time major champion.

Harrington has been nursing a troublesome knee having got surgery on it five years ago. The Champions Tour events are usually 54 holes but the US Open is a full 72-hole strokeplay event something he isn’t too keen on as he manages his left knee this week.

“No, the physicality of 72 holes is tough at this stage. I don’t hit as many balls now because of it. I’ve got to take it easier. I carry a few injuries, and you just have to mind yourself.

“I don’t relish 72 holes. I suppose, if this is what you’re really asking, I knew yesterday’s bad side of the draw didn’t make any difference. I knew I had time to catch up, so I didn’t — nobody got away yesterday, and I didn’t do myself any harm shooting par.

“If that’s what you mean, yes. If it’s a 54-hole event maybe you would be thinking, you know, you don’t want to be on the wrong side of the draw. But with 72 holes and it being a U.S. Open, everybody, even myself, when you get in that lead you tighten up and a get a little bit cautious.

“It was one of those, yeah, wrong side of the draw, but it didn’t make much difference,`’ added Harrington who broke his driver this morning.

Darren Clarke missed the cut on ten-over after a seven-over 78.