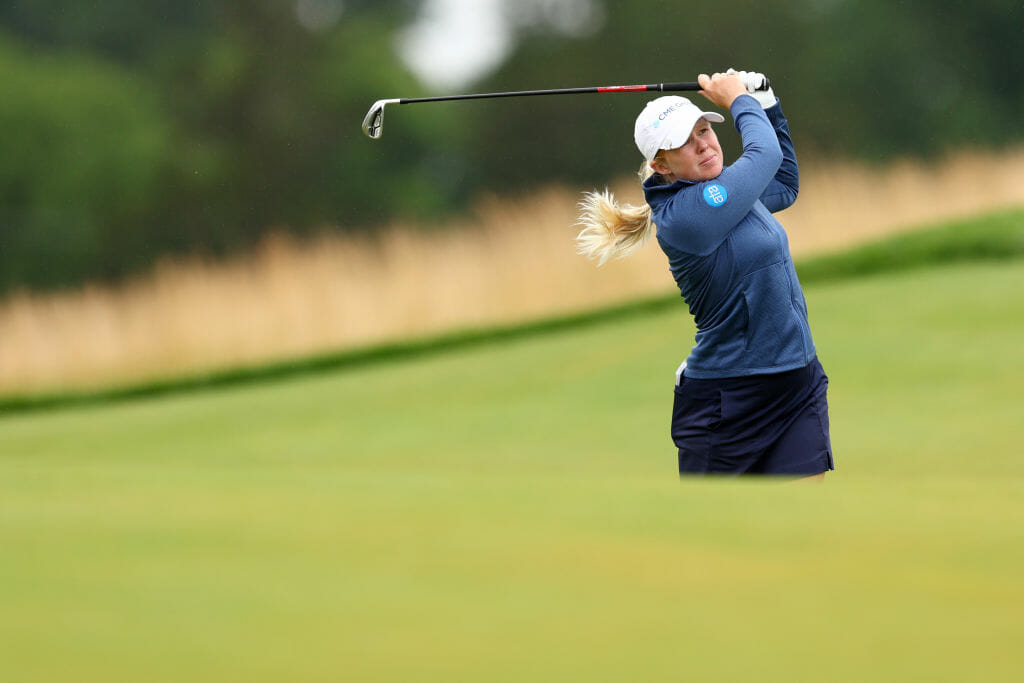 Stephanie Meadow kept up her good form this season as she moved into the top-15 at the halfway stage of the KPMG Women’s PGA Championship as In Gee Chun sprinted into a six-shot lead.

Meadow carded a three-under 69 at Congressional to move to two-under for the tournament and just three shots shy of second place.

Had it not been for three dropped shots late in her first round the Jordanstown native would be firmly in contention. However, she will need a remarkable weekend to make up a nine-shot deficit.

The 30-year-old raced out of the traps with three birdies in her first seven holes before adding another on the 11th and despite a dropped shot on 15 Meadow held her nerve with three closing pars to not only make her first cut in this championship but to be sharing 14th place.

“I played pretty solid. I had a tough finish yesterday, but I played really solid today,” said Meadow.

With conditions being quite different from the first round Meadow was asked what kind of strategy she had employed to cope:

“I definitely could be a little more aggressive today. I mean, I had shorter clubs in. Yesterday we played the first seven, eight holes in kind of drizzly rain. That makes it harder and further anyway.

“Not a whole lot changed. I just made some more putts and just didn’t really make any mistakes”

And as for the weekend Meadow knows the size of the task that lies ahead:

“You’ve got to go low. We’ll see if the conditions stay like they are now, you know, with the greens probably won’t get super, super bouncy, so the birdies will be out there, and it’s up to somebody to catch her.

“She’s (In Gee Chun) a great player, so I wouldn’t be expecting her to come anywhere backwards, so everybody has to go chase.  I think everybody knows that. “

Leona Maguire also made the cut on two-over thanks to a level-par 72 but she is a distant 13 shots back after she traded three birdies and as many bogeys on the Blue Course.

Lydia Ko and last week’s winner Jennifer Kupcho occupy second place on five-under after rounds of 67 and 68 respectively but they are in need of strong weekends to trouble Chun who is in a league of her own on eleven-under after a three-under 69.

Former world number one Ko has been in decent form as of late after a difficult start to the season and she has vowed to give it her all this weekend in the hope the door opens to win her third major and first since 2016.

“I think the last few events I finished well,” the former Rolex Rankings No.1 said. “Whereas at the (beginning) of the year I started (events) well and didn’t finish as well in regard to rounds three and four.

“I think the last couple of weeks it has been a few silly mistakes, a few shots where I lost focus a little bit costing me a couple of shots (that kept me from winning). Other than that, I feel like the game is in a pretty solid place.

“I think it is very difficult to win,” Ko said. “The level of play on our tour is incredible. You can see that by the scores, week-in and week-out. It’s hard to win, but I’m trying to put myself in that kind of position. When you keep knocking on the door, you hope that one day that door will open.”