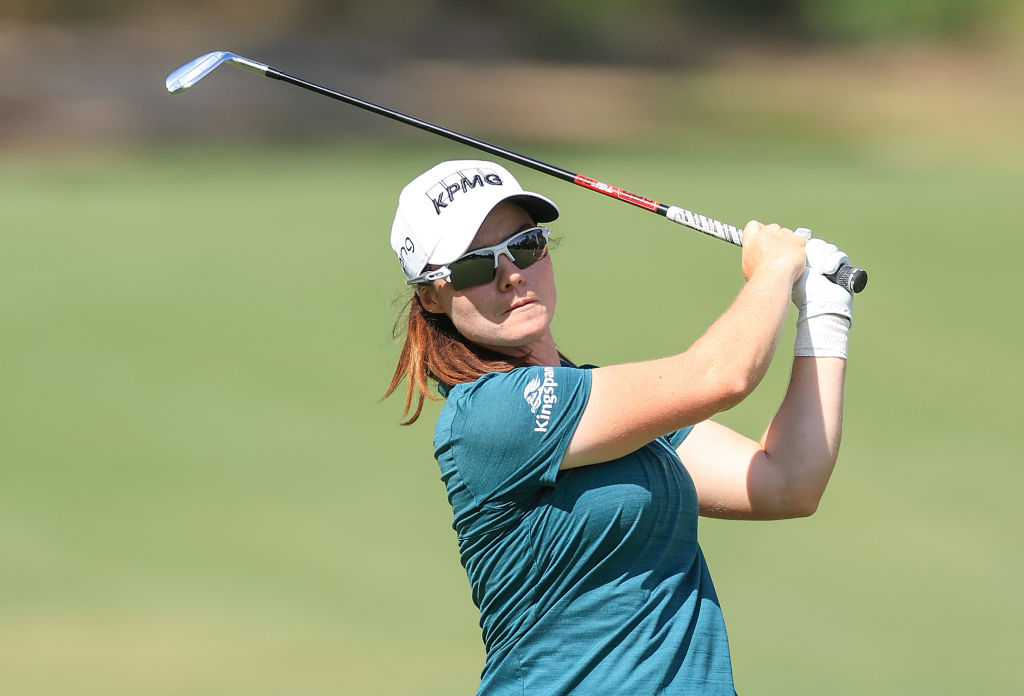 It would be heartbreak at the Meijer LPGA Classic for Leona Maguire as she remarkably clawed back a seven-shot deficit at the start of the day to force a play-off but would miss out on a second LPGA Tour victory as Jennifer Kupcho emerged victorious in Belmont, Michigan.

The Slieve Russell woman produced an incredible final round at Blythefield Country Club, seemingly playing for the best of the rest of the field having started the day seven shots off leader Nelly Korda, but eight birdies and a bogey saw her tie the lowest round of the week with a seven-under 65 that set the clubhouse lead at 18-under.

It looked like it might not be enough as Maguire trailed Kupcho by a shot as the Chevron champion sat at 19-under, with Korda dropping to 17-under with a bogey at the 13th, but a bogey from Kupcho at the 16th and a birdie for Korda at the par-five 18th forced a three-way play-off.

The drama was only just beginning, though, as Korda was eliminated at the first play-off hole as Maguire holed out comfortably for birdie and the World No.2 could only manage a par, but Kupcho should have won it there and then after a glorious approach to four-feet for eagle, only to miss the putt.

Having been given a reprieve, it seemed Maguire might take advantage when she hacked a 3-wood out of the fairway rough to 25-feet for eagle on the second play-off hole, with Kupcho just inside her, and when both missed it seemed that a third play-off hole would be needed.

But after Kupcho tapped in for birdie, Maguire agonisingly saw her three-footer to extend the play-off slide by to hand the title to the American and leave the Cavan woman devastated.

“It’s really special. I’ve been really close but, I mean, this leaderboard was stacked. I think that’s what I’m most proud of, is players that were up there with me. It was a very close battle to the end and I’m proud of it,” said Kupcho.

Maguire’s final round performance deserved so much better, too, a run of three birdies starting at the fourth taking her to the turn at three-under for the day following a birdie at the par-four first and a bogey on the par-four third.

It appeared she was still too far back to challenge for the title as Kupcho, despite a double-bogey and a bogey in her first six holes, reached the halfway point at 17-under thanks to an eagle-birdie finish to her front nine, with Korda – who is only just back on Tour after recovering from a blood clot in her arm – close in arrears at 16-under.

But Maguire stepped on the gas on the back nine, birdies at the par-five 10th, par-three 13th and par-five 14th putting her in position to strike, and she set a competitive clubhouse score at 18-under as she rolled in the birdie putt at the par-five 18th.

And that would prove to be enough as Kupcho, after birdieing the 12th and 14th, dropped back to 18-under by bogeying the par-four 16th, while Korda joined them in the play-off by chipping close and tapping in for birdie on her final hole.

But it would be Kupcho who would eventually prevail, shaking off her first extra hole disappointment to get over the line at the second time of asking for her second win of the season, leaving Maguire needing to shake herself off ahead of next week’s third Major of the year, the KPMG PGA Championship.

She will be pleased with how her week has gone, though, even with the disappointment of not claiming the victory as she snapped a run of four missed cuts in her last five starts, and the manner of her performance – tying Lydia Ko for the lowest weekend performance at 11-under – will leave her happy with how she is trending.