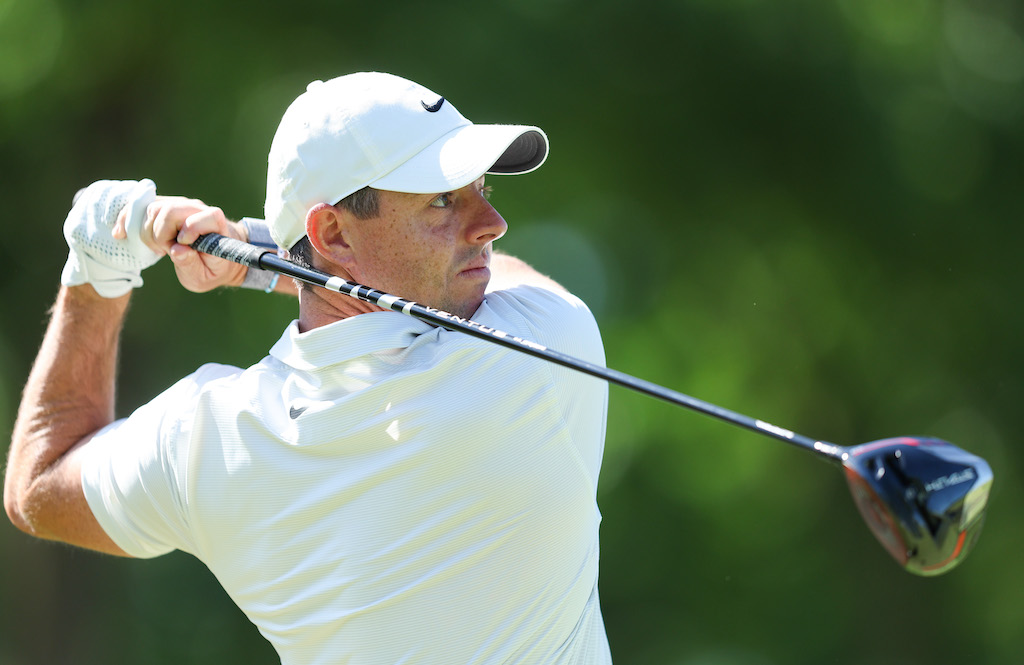 Rory McIlroy is just one round shy not only capturing a second straight RBC Canadian Open title but successfully defending a tournament for a first time anywhere in his 32-tournament winning career.

McIlroy signed for a five-under-par 65 and now heads to the final round of the $8.7m event sharing the lead at 10-under-par with American Tony Finau, who seized an eagle and seven birdies in a career low eight-under 62.

McIlroy’s ‘moving day’ effort was capped with six birdies and just a lone bogey as well as signing for a third round in the 60s after earlier scores of 66 and 68. “Being out in the last group tomorrow sets me up really nice but then I’m just happy to give myself a chance”, said McIlroy.

“Once I saw, I think Tony (Finau) had got to 10 or maybe 11, I think I was on like 8 or 9 at the time. I just said to myself, let’s just try to get ourselves in the final group. Sort of feels pretty similar to last time at Hamilton, I was just trying to get myself in that final group with Webb and I was able to, tied for the lead there.

So, yeah, it just sets me up well for tomorrow. I feel like all aspects of my game are in pretty good shape, so just go out there and try and post a number and see if that’s good enough”

In what is a good omen for McIlroy is the fact that it’s only the second time this 2021/22 PGA Tour wraparound season has produced three rounds in the 60s, and the last been being his opening event of the new season on route also to a last day score in the 70s to capture last October’s C J Cup @Summit.

As well, the tournament-starved Canadians have got behind McIlroy and something that the four-time major champ recognises as he also strives to become the first back-to-back Canadian Open champ since Jhonattan Vegas in 2016 and 2017, while Jim Furyk accomplished the same feat in 2006 and 2007.

“Yeah, it’s unbelievable, the atmosphere out there today was, I mean I can’t remember the last time I played in an atmosphere like that. It was really special”, said McIlroy in addressing the crowd support.

“Walking on to the 16th tee there, the Rink, my ears were ringing hitting that tee shot.

“So, it’s going to be loud again tomorrow and that’s really good fun for us to play in. Just really appreciate everyone coming out and supporting this event.

“Though if I am going to win, I need to set myself a number and be super aggressive. I know I’m going to have to make some birdies out there to win this thing tomorrow. And you see Tony shoot a 62, JT shoot a 63, so you know there are numbers out there to be had. I can’t worry too much about what the other guys around me are doing, I just have to go out there, set a target number in my head and just try to go for that”.

However, it was really not till the final hole that McIlroy produced the wedge play magic that has been missing on the host St. George’s host course, and that was his second shot into the last, and with his ball spinning back to just outside of six-feet from the cup.

And though McIlroy missed the birdie putt, it was the approach shot he’ll draw on if he’s to win the 111th hosting of the Canadian Open. McIlroy made his RBC Canadian Open debut in 2019 and now after a three-year absence, and due to COVID-19 lockdown measures, he’s staring at winning the event for a second occasion in as many starts.

Shane Lowry mirrored McIlroy’s effort with three rounds in the 60s, posting scores of 67 and a pair of 69s for a share of 15th place at five-under-par.

In fact, Lowry had moved ahead of McIlroy in holing a 22-foot birdie putt from the back of the green at the par-4 12th hole however the Clara golfer dropped shots at 14 and 15 to be among 28 players inside the top-20.