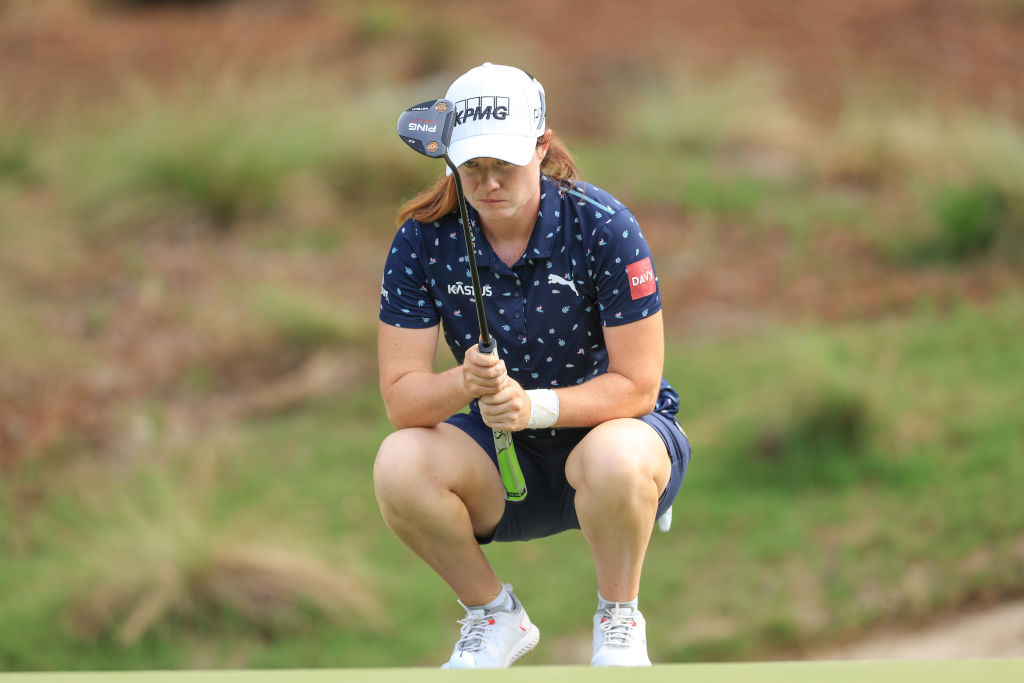 Leona Maguire will head into the weekend at the U.S. Women’s Open inside the top-20 but seven shots off the lead as she looks to launch her latest Major assault at Pine Needles Lodge.

The Cavan woman made it back-to-back rounds of 70 to open the second Major of the year in North Carolina as six birdies, three bogeys and a double-bogey moved her up to two-under-par and into a share of 17th.

“I think I did a really good job at staying patient, staying disciplined, committing to my targets into the greens.” said Maguire. “I Played fairly conservatively, I would say. Made some nice putts when I needed to, and I had a few key up and downs and kind of kept the momentum going.”

Despite a couple of solid rounds, which she is increasingly producing in the biggest events, Maguire is seven shots back of joint-leaders Mina Harigae and Minjee Lee, who hold a two-shot lead at the midway point of the tournament at nine-under-par.

“I’ve never shot under par in the U.S. Open before, so I’ve done it two years in a row, which is nice. I’ts a case of just more of the same for the weekend.” added the KPMG brand ambassador.

“Ultimately I’m still quite a ways back. It feels pretty bunched though, so you never know what’s going to happen. I’ve had quite a few birdies, more birdies than I expected over the last two days, so trying to keep those bogeys away will be the goal for the weekend.” said Maguire

Evian champion Lee was particularly impressive in her second round as she carded a five-under 66, with Harigae having set the clubhouse target in the early wave after a 69 on day two, with the pair a couple clear of Hyejin Choi and Anna Nordqvist at the top.

“Same as yesterday – my putting was really solid again. Even when I was tough spots I still managed to get up and down,” Lee said.

“I just tried to take advantage of my birdie opportunities and that’s pretty much what I did today.”

The story of the week continues to be young Swedish amateur Ingrid Lindblad, meanwhile, as she added a level-par 71 in her second round to stay six-under-par for the tournament and set a new record for the lowest 36-hole score by an amateur at the U.S. Women’s Open.

The 22-year-old, the World Amateur No.2, signed for three birdies and three bogeys in a nerveless performance to sit alongside esteemed company in World No.1 Jin Young Ko in a share of fifth and she will relish the chance to impress over the weekend.

Maguire, meanwhile, will be equally frustrated as she was pleased with her finish as she could have been within touching distance of the lead were it not for that double-bogey, which came at the par-four 14th, but she showed great resilience with birdies at the 15th and 17th to go under-par for the second consecutive day.

The 27-year-old has a good record at Majors and will hope to keep that going in North Carolina, with another top-10 finish within reach, and she will be encouraged by her ability to pick up plenty of birdies across the two rounds provided she can eliminate some of the mistakes.

The week is over for Stephanie Meadow, however, and it was two late bogeys in her second round that cost her a place in the weekend as a three-over 74 dropped her back to four-over-par – one shot too many.

The Galgorm touring pro had started the day one-over and was still looking in a good position heading into her back nine despite a double-bogey and two bogeys alongside three birdies taking her to two-over, however a painful bogey at the par-five 15th was made even worse when she dropped another at the par-four 17th.

“It was pretty bad, to be honest.” admitted Meadow. “Just sloppy. Really sloppy. Looking pretty good for a birdie on whatever the last par-5 is. It was three yards off the front of the green, and ended up with a bogey. Just can’t do that in major golf, and I’ll probably end up missing the cut.”

That left a very nervy wait for Meadow at four-over and unfortunately the cut line would not increase by a shot, meaning her hope of a weekend appearance at a Major is over.